“Such conversion of complaints under Section 138 from summary trial to summons trial has been contributing to the delay in disposal of the cases.”

As nation gasps for breath, Supreme Court calls for “even handed” distribution of COVID essentials like oxygen, Remdesivir; asks Centre to submit a “national plan”

“The High Courts have passed certain orders which may have the effect of accelerating and prioritising the services to a certain set of people and slowing down the availability of these resources to certain other groups whether the groups are local, regional or otherwise.”

Distribution of COVID essentials like oxygen, Remdesivir| “Not substituting the jurisdiction of the High Courts”; Supreme Court explains why it intervened

“The role of this Court in the present situation is complementary to the role and functions being performed by the High Courts. Neither is intended to substitute the other.”

Allahabad HC’s “lockdown” judgment stayed for now but UP Govt to “immediately” report to HC on steps taken and future plan: Supreme Court

“Until further orders, there shall be an ad interim stay of the impugned order passed by the High Court.”

Vacancies in High Courts and Pendency of Cases

Ad-hoc judges to be appointed to deal with unprecedented pendency of cases in High Courts. Supreme Court issues guidelines and “trigger points” for activation of dormant Article 224A

“Article 224 A should not be made a dead letter, more so when the need is so pressing.”

With 220 vacancies, “the High Courts are in a crisis situation”; Here’s what the Supreme Court advised to facilitate timely appointments

“The High Courts are in a crisis situation. There are almost 40% vacancies in the High Courts, with many of the larger High Courts working under 50% of their sanctioned strength.”

After noticing common deficiencies which occur in the course of criminal trials and certain practices adopted by trial courts in criminal proceedings as well as in the disposal of criminal cases and causes, the 3-judge bench of SA Bobde, CJ and L. Nageswara Rao and S. Ravindra Bhatt, JJ has directed all High Courts to take expeditious steps to incorporate the Draft Rules of Criminal Practice, 2021 as part of the rules governing criminal trials, and ensure that the existing rules, notifications, orders and practice directions are suitably modified, and promulgated (wherever necessary through the Official Gazette) within 6 months.

A blind Scheduled Caste woman raped! Supreme Court explains intersectional oppression and how it needs to be addressed

“The experience of rape induces trauma and horror for any woman regardless of her social position in the society. But the experiences of assault are different in the case of a woman who belongs to a Scheduled Caste community and has a disability because the assault is a result of the interlocking of different relationships of power at play.”

Balance sheet entries can amount to an acknowledgement of liability under Section 18 of the Limitation Act, 1963: Supreme Court

“… it would depend on the facts of each case as to whether an entry made in a balance sheet qua any particular creditor is unequivocal or has been entered into with caveats, which then has to be examined on a case by case basis to establish whether an acknowledgement of liability has, in fact, been made, thereby extending limitation under Section 18 of the Limitation Act.”

Any creditor including Central/State Government or any local authority bound by Resolution Plan approved by adjudicating authority under Section 31(1) IBC: Supreme Court

“Merely because there is no test performed, the Insurer would not be deprived of its right to establish a case which is well within its rights under the contract.”

“Complex” questions involving novation of contract can’t be decided by Court under Section 11 of the Arbitration and Conciliation Act: Supreme Court

Can’t treat unequals equally; No automatic vacation of stay under Section 254(2A) Proviso 3 of the Income Tax Act, 1961 if the assessee is not responsible for the delay: Supreme Court

“Unequals have been treated equally so far as assessees who are responsible for delaying appellate proceedings and those who are not so responsible, resulting in a violation of Article 14 of the Constitution of India.”

Rohingya Refugees not to be deported unless the procedure prescribed for such deportation is followed: Supreme Court

“Right not to be deported, is ancillary or concomitant to the right to reside or settle in any part of the territory of India.”

Non-interference in the matter would have inevitably led to the disruption of rapid metro lines for Gurgaon leading to disastrous consequences for the general public.

The bench of Navin Sinha and Krishan Murari, JJ has held that there cannot be any rigid standard or yardstick for acceptance or rejection of a dying declaration and whether or not it will be admissible in evidence will depend upon the fact of each case.

“We are afraid that we cannot do anything”; Read why Supreme Court refused to interfere with the dismantling of INS Viraat, the oldest serving warship in the World

“While appreciating the sentiments of the petitioners, we are afraid that we cannot do anything at this stage”

“High Court ought not to have embarked on any other enquiry in the matter except to the maintainability of the PIL.”

“Consent of parties cannot obviate the duty of the High Court to indicate its reasons”; Supreme Court explains the law on Bail

“Whether an order granting a bail is a precedent on grounds of parity is a matter for future adjudication if and when an application for bail is moved on the grounds of parity on behalf of another accused…it is for that court before whom parity is claimed to determine whether a case for the grant of bail on reasons of parity is made out.”

Judicial review or judicial restraint? Supreme Court explains where the virtue itself turns into vice

The Division Bench comprising of Rohinton Fali Nariman* and B.R. Gavai, JJ., addressed the issue of overstepping of review jurisdiction by the High Courts in policy matters. The Bench expressed,

“Judicial review in these matters is equivalent to judicial restraint in these matters…the writ court does not have the expertise to correct such decisions by substituting its own decision for the decision of the authority.”

“There is no doubt that liberty is important, even that of a person charged with crime but it is important for the courts to recognise the potential threat to the life and liberty of victims/witnesses, if such accused is released on bail.”

Murderer kills one or two persons but persons dealing with narcotic drugs inflict death blow to a number of innocent youngsters: Supreme Court

“While striking balance between the mitigating and aggravating circumstances, public interest, impact on the society as a whole will always be tilt in favour of the suitable higher punishment.”

Can there be presumption of Hindu joint family property if a business activity carried out by Karta in a tenanted premise? Supreme Court answers

“Even if a male member had taken premises on rent, he is tenant in his individual capacity and not as Karta of Hindu Undivided Family in the absence of any evidence that Karta was doing the business for and on behalf of Joint Hindu Family.”

“Mini Trial not permissible at the stage of framing of charge”; Supreme Court explains the yardsticks of revisional jurisdiction of High Courts

The Division Bench comprising of Dhananjaya Y. Chandrachud and M.R. Shah*, JJ., recently held in an interesting case that evaluation of evidence on merits is not permissible at the stage of considering the application for discharge and the same is beyond the scope of revisional jurisdiction of the High Courts. The Bench explained,

“At the stage of framing of the charge and/or considering the discharge application, the mini trial is not permissible.”

“…keeping in view, the sustainable development concept and on striking a balance the protection of the rare species of birds is essential to be made, the effort being to save every bird while at the same time allowing transmission of power in an appropriate manner.”

“An alternate remedy by itself does not divest the High Court of its powers under Article 226 of the Constitution in an appropriate case though ordinarily, a writ petition should not be entertained when an efficacious alternate remedy is provided by law;.”

What happens to a petition filed under wrong nomenclature?

The nomenclature under which the petition is filed is not quite relevant and it does not debar the Court from exercising its jurisdiction which otherwise it possesses.

Whether punishment justified where the authority imposing punishment and approving it, is the same person?

“In terms of the specific statutory regime referable to Section 122-A of the 1965 Act, Rule 15, would be the governing principle rather than Regulation 87 framed in exercise of regulation making power referable to the general dispensation under Sections 121 and 122 of the 1965 Act. Rule 15 does not contemplate that the Chairman of the Committee is required to have any prior concurrence of any authority.”

Whether pre-FIR enquiry is permissible against public servant in corruption matters? What is the scope and ambit of such an enquiry? Supreme Court explains

“…(If) an enquiry is held and/or conducted after following the procedure as per Maharashtra State Anti-corruption & Prohibition Intelligence Bureau Manual, it cannot be said that the same is illegal and/or the police officer, Anti-corruption Bureau has no jurisdiction and/or authority and/or power at all to conduct such an enquiry at pre-registration of FIR stage.”

Chief Justice SA Bobde retires: A look at his legacy and justice in the time of COVID-19

COVID-19 surge| Supreme Court to hear only urgent matters from April 22, 2021. Here’s the list of matters that can be treated as “urgent” 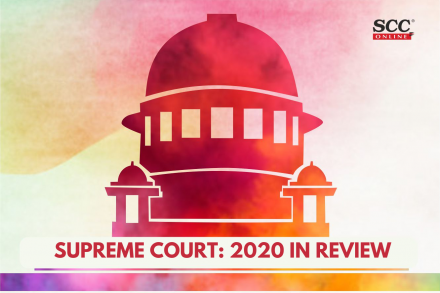 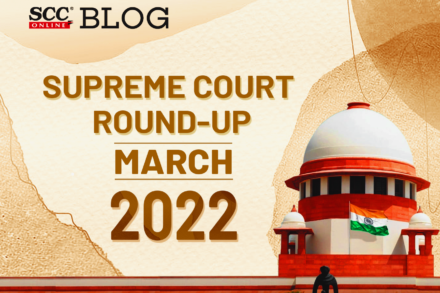