SCC Online Weekly Rewind Episode 39 ft. Nilufer Bhateja, Associate Editor is out now. The written episode along with the video episode can be watched and read below.

Death row convicts, who killed 8 members of their brother’s family over property dispute, to now serve LI for 30 years

In a case where 8 members of a family, including 4 minors, were brutally murdered pursuant to property dispute between siblings, the Supreme Court has converted the punishment from death to life. However, keeping in mind the gruesome murder of the entire family of their sibling in a pre-planned manner without provocation due to a property dispute, the Court held that the convicts deserved a sentence of a period of 30 years.

The Court stressed that the Courts are bound to elicit information of all the relevant factors and consider those regarding the possibility of reformation, even if the accused remains silent.

In a case where a Project Proponent had adhered to the applicable legal framework for Environmental Clearance during the concerned period but has been left in the lurch due to changes in the Environmental Clearance regimes, the Supreme Court held that a Project Proponent cannot be expected to anticipate the changes in Environmental Clearance regimes, especially as a result of judicial interventions, and keep revisiting the sanctioned clearances by the competent authority or even raze down validly constructed structures. Neither can it be expected to knock the doors of an authority, not empowered at the relevant time, to process its applications.

The Court said that

“Such a scenario would render the process akin to a Sisyphean task, eternally inconclusive and never ending.”

74-year-old, arrested under UAPA, gets bail after 9.5 years

In a big relief to a 74-year-old, who has been behind the bars since 2012 as an undertrial prisoner, after being arrested under the Unlawful Activities (Prevention) Act, 1967 (UAPA), has directed his release on post-­arrest bail by the trial Court.

The order came after it was brought to the Court’s notice that after the charge-sheets came to be filed way back in 2012, the charges have been framed after 7 years of filing of the charge-sheet on 20th June, 2019. Also, the hearing was taking place only once a month, as opposed to the “day-to-day” hearing provision under the NIA Act, 2008.

The Court said that considering that there were 298 prosecution witnesses who were yet to be examined, making a timely trial impossible and the fact that the74-year-old has been incarcerated since almost 9.5 years, it was “obligated to enlarge him on bail”.

“In the instant case, from the very beginning, there has been attempt on the part of the family of the victim to save the accused, who was the vicar of the local church, from the clutches of law.”

Being in love isn’t synonymous to consent for sexual intercourse; HC upholds conviction for rape

Kerala High Court held that passive submission made by the victim under unavoidable circumstances as she had no other option is not consent. While clarifying the difference between consent and submission, the Bench expressed,

“Merely for the reason that the victim was in love with the accused, it cannot be presumed that she had given consent for sexual intercourse.”

Noting in case after case, complaints from senior citizens that their own sons and daughters are harassing them, Division Bench of G.S. Patel and Madhav J Jamdar, JJ., expressed that,

“…harassment is an attempt to somehow grab the senior citizen’s property in his or her lifetime without thought spared to the mental or physical health well-being or happiness of these seniors.”

Agreeing with the various decisions of the Courts, Bench expressed that,

“…it is our experience that in this city, and particularly or most especially amongst the wealthy of this city, senior citizens and elderly parents are being subjected to all kinds of harassment and deprivation in their twilight years.”

When LSD Drug is put on blotter paper, would blotter paper form an integral part of drug? Weight of paper will be considered for determining small or commercial quantity? Read on

Addressing a very crucial question having relevance with the Narcotics Drugs and Psychotropic Substances cases, Revati Mohite Dere, J., decided whether blotter paper forms an integral part of the LSD Drug when put on blotter paper for consumption.

‘Hang by neck till dead’: Bom HC confirms death sentence in a rarest of rare cases for committing rape and murder of a 3-years 9-months old child

A Division Bench of Sadhana S. Jadhav and Prithviraj K. Chavan, JJ. confirmed the death sentence awarded by the trial court to the accused−appellant for committing heinous crime of brutal sexual assault on a child aged 3-years and 9-months, and after that committing her murder. While confirming the death sentence in this rarest of rare cases, the High Court observed:

“The act of the accused is gruesome and is committed in a diabolic manner. It is a heinous offence. It is unimaginable that a cheerful, frolicking child enjoying with her pet would provoke the feelings of lust in a man who is a father of two daughters and a son. The perversity in the mind of the accused is apparent and therefore, we are of the opinion that the aggravating circumstances in the present case outweigh the mitigating circumstances placed before the court in the course of hearing of the appeal.”

The Central Government, on the recommendations of the Council have extended Tenure of National Anti-profiteering Authority increased from 4 years to 5 years.

The Act repeals the Farmers (Empowerment and Protection) Agreement on Price Assurance and Farm Services Act, 2020, the Farmers’ Produce Trade and Commerce (Promotion and Facilitation) Act, 2020 and the Essential Commodities (Amendment) Act, 2020.

The Bill on Salaries and Conditions of Service of High Court and Supreme Court Judges introduced in Lok Sabha on November 30, 2021.

The legislative intent behind insertion of section 17B and section 16B respectively was to provide benefit of additional quantum of pension to a retired Judge from the first day of the month in which he completes the age specified in the first column of the scale and not from the first day of his entering the age specified therein as so interpreted by the High Courts. Therefore, it is proposed to insert an Explanation in section 17B of the said High Court Judges Act and in section 16B of the said Supreme Court Judges Act to clarify the intention and to ensure that there is no scope for any other interpretation.

The Labour Department of Delhi has notified the Draft of the Code on Wages (Delhi) Rules, 2021 which shall extend to the National Capital Territory of Delhi.

The Code addresses the problems relating to delay in payment of wages whether on monthly, weekly, or daily basis. The Code will safeguard that there is no discrimination between male and female as well as transgenders in getting wages.

We have introduced a new feature on SCC Online this week. Check out the Labour and Employment folder under Curated Topics to access the same. We have also added minimum wages notifications of all Indian States on Web Edition. Hope you will find it useful 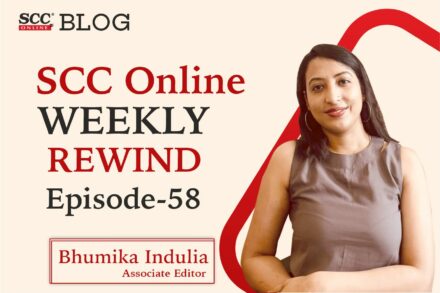 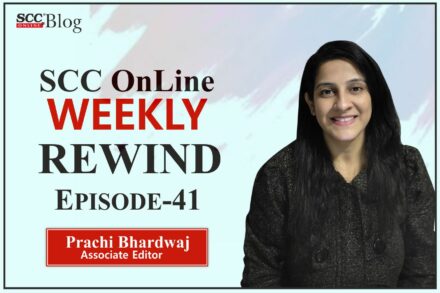 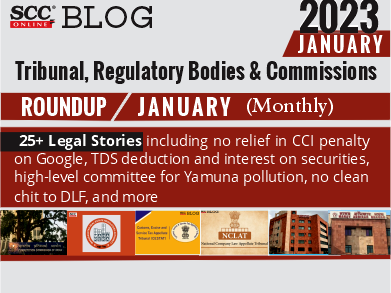 Tribunal, Regulatory Bodies and Commissions Monthly Roundup | January 2023 | 25+ Legal Stories including no relief in CCI penalty on Google, TDS deduction and interest on securities, high-level committee for Yamuna pollution, no clean chit to DLF, and more