Supreme Court of the United States: Roberts, CJ., while addressing a matter with regard to artworks obtained by Nazis from Jewish art dealers with the usage of coercion, held that:

The Foreign Sovereign Immunities Act provides that foreign nations are presumptively immune from the jurisdiction of United States Courts. One of the exceptions under the statute is:

a sovereign does not enjoy immunity in any case “in which rights in property taken in violation of international law are in issue.”

Present matter is in with regard to the dozen medieval relics and devotional objects known as the Welfnschatz. The pieces date back to the early days of the Holy Roman Empire and occupy a unique position in German History and culture.

The collection was assembled within Germany’s Brunswick Cathedral over the course of several centuries, before being moved to a Hanoverian chapel in 1671 and later to Switzerland for safekeeping in the wake of World War I.

During the waning years of the Weimar Republic, a consortium of three art firms owned by Jewish residents of Frankfurt purchased the Welfenschatz from the Duke of Brunswick. By 1931, the consortium had sold about half of the collection’s pieces to museums and individuals in Europe and the United States, including many to the Cleveland Museum of Art, where they reside today.

After ascending to power, Hermann Goering—Adolf Hitler’s deputy and the Prime Minister of Prussia—became interested in the remainder of the Welfenschatz.

Reasons for the Complaint filed and what does it allege?

It has been alleged in the complaint that Hermann Goering employed a combination of political prosecution and physical threats to coerce the consortium into selling the remaining pieces to Prussia in 1935 for approximately one-third of their value.

What happened to the consortium members and how are the respondents related to them?

Two of the consortium members fled the country following the sale, and the third died in Germany shortly thereafter.

Respondents are two United States citizens and a citizen of the United Kingdom who traces their lineages back to the three members of the consortium.

The United States took possession of the Welfenschatz in the course of the occupation of Nazi Germany at the end of the war, eventually turning the collection over to the Federal Republic of Germany.

For nearly 60 years, the treasure has been maintained by Stiftung Preussischer Kulturbesitz (SPK)—the Prussian Cultural Heritage Foundation—and it is now displayed at a museum in Berlin. SPK is an instrumentality of the Federal Republic.

SPK conducted an investigation on heirs approaching them claiming that the sale of the Welfenschatz to Prussian Government was unlawful. In the investigation, it was determined that the transaction occurred at a fair market price without coercion.

Parties agreed to submit the claim to the German Advisory Commission for Return of Cultural Property Seized as a Result of Nazi Persecution, Especially Jewish Property.

Commission concluded after reviewing the witnesses and hearing from expert witnesses the sale had occurred at a fair price without duress.

Germany argued that it was immune from suit because the heirs’ claims did not fall within the FSIA’s exception to immunity for “property taken in violation of international law.”

Whether the sale of the consortium’s property was an act of genocide, because the expropriation exception is best read as referencing the international law of expropriation rather than of human rights.

As a Nation, we would be surprised—and might even initiate reciprocal action—if a court in Germany adjudicated claims by Americans that they were entitled to hundreds of millions of dollars because of human rights violations committed by the United States Government years ago. There is no reason to anticipate that Germany’s reaction would be any different were American courts to exercise the jurisdiction claimed in this case.

Court found that none of the arguments submitted by the heirs could overcome the text, context and history of the expropriation exception.

Heirs could not show that the FSIA allows them to bring their claims against Germany.

Further, while concluding its decision, Supreme Court expressed as follows:

While vacating the decision of the  Court of Appeals for the D.C. Circuit, Bench remanded the case for further proceedings.[Federal Republic of Germany v. Philipp,  2021 SCC OnLine US SC 1, decided on 03-02-2021] 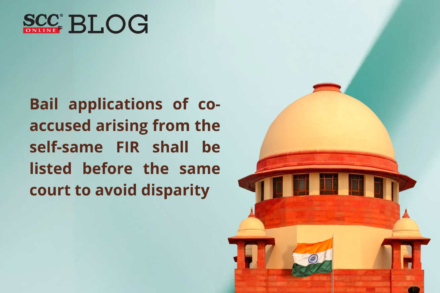 Bail applications of co-accused arising from the self-same FIR shall be listed before the same court to avoid disparity: Supreme Court