Gujarat High Court: The Division Bench of J.B. Pardiwala and Vireshkumar B. Mayani, JJ., while addressing the issue of grant of permanent alimony to a Muslim Woman noted the significant difference between permanent alimony and periodical maintenance.

An instant appeal under Section 19 of the Family Courts Act, 1984 was filed at the instance of the original defendant (husband) and was directed against the judgment and decree passed by Principal Judge, Ahemdabad for a decree of divorce under the provisions of Dissolution of Muslim Marriages Act, 1939.

Whether the Family Court committed any error in passing the order of permanent alimony in favour of the wife while granting the decree of divorce to the wife?

There are two types of alimony:

1. Given at the time of court proceedings- This is usually the maintenance amount.

2. Given at the time of legal separation- This can be given either in a lump sum or as a fixed monthly or quarterly payment or as per the requirements of the spouse.

Supreme Court on a creative and meaningful interpretation of the MWPRDA, 1986, upheld its constitutionality. It held that a Muslim husband is liable to make reasonable and fair provision for the future of his divorced wife extending beyond the Iddat period.

In the Supreme Court decision of Shabana Bano v. Imran Khan, (2010) 1 SCC 666, the question that fell for consideration was whether a Muslim Divorced wife would be entitled to receive the amount of maintenance from her divorced husband under Section 125 CrPC, and if yes, then through which forum.

In the above decision of the Supreme Court, it was held that petition under Section 125 CrPC would be maintainable before the family court as long as the wife does not remarry. The amount of maintenance to be awarded under Section 125 of the CrPC cannot be restricted for the Iddat period only.

The most significant submission on behalf of the appellant was that no provision exists in the Dissolution of Muslim Marriage Act, 1939 for the maintenance or permanent alimony. Further, it was stated that Family Court had no jurisdiction to pass any order with respect to maintenance or permanent alimony once the suit is allowed and the marriage is dissolved at the instance of the wife.

The Muslim Women Act is “to protect the rights of Muslim women who have been divorced by or have obtained a divorce from their husbands and to provide for matters connected therewith or incidental thereto.

Hence the Muslim Women Act professes to deal with Muslim divorced women and their rights against their former husbands.

Bench observed that, where a Family Court has been established, the power and the jurisdiction of the Family Court under Section 7(2) of the Family Courts Act, 1984 to entertain an application for maintenance, even by a divorced Muslim wife, under Chapter IX of the Code of Criminal Procedure has not been taken away, either expressly or even by implication by the Muslim Women Act of 1986.

And once such an application is made to a Family Court under Section 7(2) of the Family Courts Act, and not to a Magistrate, the same has got to be disposed of by the Family Court in accordance with the provisions of Chapter IX of the Code of Criminal Procedure, and the Muslim Women Act of 1986, including its Section 5, would have no manner of application.

It was also sought to be argued on behalf of the appellant that in view of Section 4 of the Act, 1986, the former husband had no liability to make any provision for the Post-Iddat period.

Bench observed that the right of maintenance given to the wife and the minor children under the provisions of the Muslim Women (Protection of Rights on Divorce) Act, 1986, is in addition to the right, which the minor children are having under Muslim Law to get maintenance from the father. The law expects that the parties should not be driven to approach the different forums but in one forum itself, they should be granted whatever reliefs to which they are entitled.

Supreme Court in the decision of K.A. Abdul Jaleel v. Shahida, (2003) 4 SCC 166 was concerned with the provisions of Section 7 of the Family Courts Act, 1984 as to whether the Family Court had the jurisdiction to adjudicate upon any question relating to the properties of the parties not only of the subsisting marriage but also divorced parties and the Supreme Court was pleased to hold that the reason for the enactment of the Family Courts Act, 1984, was to set up a Court to deal with all the disputes concerning with the Family and it is now a well-settled principle of law that the jurisdiction of a Court created specifically for the resolution of disputes of certain kinds should be construed liberally.

Counsel submitted that the wife was remarried and in view of there was no question of any lump sum permanent alimony.

A divorced Muslim woman is entitled to receive, from her husband, inter alia, “maintenance”, “reasonable and fair provision”, “Mahr” etc. under Section 3 of the Act, 1986.

The Supreme Court had the occasion to consider the question whether a Muslim woman obtaining a divorce under the provisions of the Act, 1939 is entitled to maintenance under Section 125 CrPC, and it was held in Zohara Khatoon v. Mohd. Ibrahim, (1981) 2 SCC 509 that there are three distinct modes in which a dissolution of marriage can be brought about and Clause(b) of the Explanation to Section 125(1) envisages all the three modes, whether a wife is divorced unilaterally by the husband or where she obtains divorce under the other two modes, she continues to be a wife for the purpose of getting maintenance under Section 125 of the Code.

The Supreme Court held that divorce resulting from the dissolution of marriage under the provision of Dissolution of Muslim Marriage Act, 1939 is also a legal divorce under the Mohammedan law by virtue of the Statute (1939 Act).

Bench observed that when the Court would make an award of permanent alimony or for one-time payment, it is not founded on any stipulation that any part of the sum would be either actually refunded in whole or in part. Such sum is not granted on the condition against remarriage for all times to or for any particular period.

The permanent alimony in a way is an estimated sum in a lump sum to discharge the judgment debtor from his future liabilities unconditionally.

The grant of periodical payment by way of maintenance to a divorced wife is in recognition/obligation to the spouse to maintain her so long as she enjoys the continued status of a divorcee.

On remarriage status of divorcee comes to an end and she acquires another marital status as someone’s spouse. Under the Act, 1986 as under Section 125 CrPC, the wife includes a divorcee.

In view of the above discussion, it can be said that:

when the wife remarries, her claim of maintenance primarily comes to stand against her new husband coming into existence in a new relationship.

The proposition of law laid down by the Court should be looked into keeping in mind Section 3(1)(a) of the Act, 1986.

A divorced woman is entitled to ‘a reasonable and fair provision” and “maintenance” to be made and paid to her within and post the Iddat period by her former husband.

Point-wise Conclusion of the decision:

Another significant observation of the High Court was which was placed by the counsel for the parties was that the appellant had remarried way back in the year 2014. Before the respondent herein instituted the proceedings in the Family Court for divorce, the husband had already remarried and raised a family. The appellant could do so because polygamy is permissible amongst the Muslim Community. It does not constitute an offence of bigamy punishable under Section 494 of the Penal Code.

The materials on record indicated that the husband hardly paid anything towards maintenance. The respondent had to leave her matrimonial home soon after the marriage, i.e., sometime in 2010. Ultimately, she was constrained to institute the proceedings of divorce in the Family Court. Even during the pendency of such proceedings, nothing was paid to the wife. The wife, ultimately, succeeded before the Family Court in getting the marriage dissolved and was also successful in getting an order of permanent alimony. The husband now cannot turn around and say that he is not liable to pay the lump sum amount because the respondent is remarried.

Hence, in Court opinion, the Family Court’s line of reasoning ad the ultimate conclusion that was drawn by the family court was just and proper.

Shashvata U Shukla for Defendant 1

Guj HC | Whether a matter is required to be remanded in order to comply with the principles of natural justice where there has been intermingling of documents; Court explains 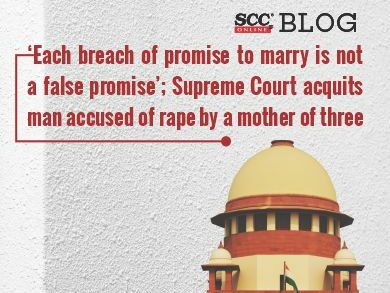 ‘Each breach of promise to marry is not a false promise’; Supreme Court acquits man accused of rape by a mother of three