Delhi High Court: A Division Bench comprising of S. Muralidhar and Vinod Goel, JJ. dismissed a criminal appeal filed against the judgment of the trial court whereby the appellant was convicted under Section 6 read with Section 5(m) and (n) of the Protection of Children from Sexual Offences Act, 2012.

The appellant was accused of committing the offence of penetrative sexual assault on her 5 years old daughter. The appellant was convicted by the trial court primarily on the testimony of the victim-daughter. Learned counsel for the appellant submitted that the victim seemed too intelligent for her age and that she was tutored by her mother, wife of the appellant.

The High Court rejected the submissions of the appellant and observed that the victim child was clear about what she underwent. Her responses during cross-examination reinforced that. She categorically stated that the appellant committed sexual assault upon her. Further, the child victim had suffered a trauma which was hard to forget, and it was unimaginable that she would falsely accuse her father. Thus, the Court held that there was no cause to interfere with the judgment impugned. The appeal was dismissed while directing Delhi State Legal Services Authority to ensure that the victim received appropriate compensation in accordance with the Victims’ Compensation Scheme for Delhi formulated under Section 357A CrPC. [Ram Dass v. State,2018 SCC OnLine Del 10291, dated 02-08-2018]

‘S.I.R cannot be generated at the drop of a hat’; Karnataka High Court quashes corruption proceedings initiated by ACB under Prevention of Corruption Act, 1988 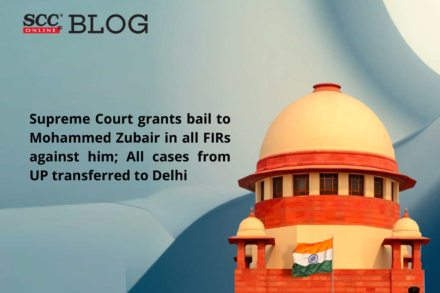 Supreme Court grants bail to Mohammed Zubair in all FIRs against him; All cases from UP transferred to Delhi