Delhi High Court: In a case filed by Tata Sia Airlines (‘plaintiff') seeking decree of permanent injunction against company selling keychains and baggage tags bearing the ‘VISTARA Marks' in the aubergine and gold colour-combination, on a Chinese e-commerce platform, namely AliExpress, by the seller (‘defendant'), Navin Chawla J., raised security concerns of national and international nature at airports due to the infringing material and thus, granted permanent injunction against the infringing defaulter and entitled it to pay Rs. 20 Lakh as damages.

Since their launch in the year 2014, the plaintiff has adopted and extensively used the colour combination of violet (aubergine) and gold as a part of its trade dress, inter alia, as part of its logo; on the uniform of its airline staff; its advertisement panels and its sign-boards/message panels at airports. The plaintiff also issues baggage tags to its crew members which bear the plaintiff’s ‘VISTARA Marks'.

In July 2020, the plaintiff received information about the sale of keychains and baggage tags bearing the ‘VISTARA Marks' which were being sold on a Chinese e-commerce platform, namely AliExpress, by the seller, despite the e-commerce platform being based mostly in China, the website contained several listings by the defendant of infringing baggage tags and keychains bearing the ‘VISTARA Marks' which were eligible for shipping to India.

Thus, the present suit was filed seeking inter alia a decree of permanent injunction restraining the defendant, their associated companies, subsidiaries, directors, wholesalers, distributors, partners or proprietors, its officers, servant and agents from advertising, directly or indirectly offering any goods or services, using or registering corporate names, domain names, or listings on social media platforms as also e-commerce websites which bear the plaintiff’s registered trademarks ‘VISTARA' and/or along with relief against passing off, dilution, tarnishment and unfair competition 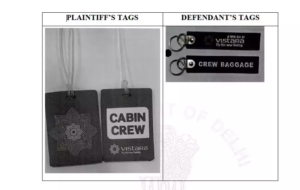 The Court remarked “Airports are an incredibly critical junction of not only travel but also of trade and commerce; any lapse in security, especially by permitting the sale of vagrantly-infringing goods, would be turning a blind eye to obvious wrongdoings of the defendant.”

Considering the fact that the plaintiff is the registered proprietor of the ‘VISTARA Marks' and none has entered appearance for the defendant, this Court is of the opinion that the defendant has no justification for the adoption of an identical trade mark for sale of their goods.

The Court thus granted permanent injunction against the entity selling infringing keychains and baggage tags bearing the ‘VISTARA Marks' and in view of the object and mandate of the Commercial Courts Act, 2015; the Delhi High Court (Original Side) Rules, 2018; and the Delhi High Court Intellectual Property Division Rules, 2022, the plaintiff was held entitled to damages and costs quantified at Rs 20 Lakh (Rupees Twenty Lakh only). 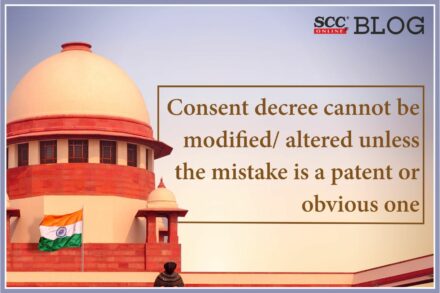 Consent decree cannot be modified/ altered unless the mistake is a patent or obvious one: SC