Kerala High Court: While adjudicating a question of law as to whether pre-arrest bail can be granted to an accused while he is sitting abroad, P.V. Kunhikrishnan, J., doubted the findings of Single Judge in Vijay Babu v. State of Kerala, 2022 SCC OnLine Ker 3158. Answering the question of law in negative the Court stated,

“If an accused in a case leaves India after knowing that a case with grievous offences is registered against him and files a bail application before the High Court while sitting abroad, he is not entitled to an order not to arrest especially when there is no such power under Section 438 CrPC.”

However, before the order rejecting bail application could be delivered, the Single Judge of the Kerala High Court granted pre-arrest bail to a similarly placed accused in Vijay Babu v. State of Kerala, 2022 SCC OnLine Ker 3158.

Noticeably, in Shafi S.M.’s case (supra), it had been held that a person sitting in another country cannot file an application under Section 438 of the CrPC apprehending his/her arrest.

“…merely because the petitioner is outside the country, the same by itself cannot deprive him of his right to have his application for anticipatory bail considered by this Court. The decision referred to in Souda Beevi v. S.I., 2011 SCC OnLine Ker 4242, can be said to be impliedly overruled and decision in S.M.Shaffi’s case (supra) did not take notice of the judgment in Sushila Aggarwal v. State (NCT of Delhi), (2020) 5 SCC 1, and therefore, could be regarded as judgment sub silentio.”

On the other hand, all that those two decisions say is that, at least before the final hearing, the Court must be convinced that the applicant is within the jurisdiction of the Court so that the conditions if any imposed, could be effectively enforced.

Section 438 CrPC does not contain a restrictive mandate that a person residing outside the country cannot file an application for anticipatory bail.”

Observations & Opinion of the Court

“I am in respectful disagreement with the above observation of the learned Judge. When in Shafi’s case (supra) this Court clearly stated that an application under Section 438 CrPC cannot be filed before this Court by an accused sitting in a foreign country, the learned Single Judge ought not have decided the matter without referring the same to the Division Bench.”

The Court opined that the direction not to entertain a bail application in a situation where the accused filed a bail application sitting in a foreign country and that also absconding after the registration of the case against him and further openly challenging the law of the land, with the knowledge of the registration of the case against him is not against the dictum laid down in Sushla Aggarwal’s case (Supra).

Further, the Court expressed that a person sitting abroad need not be invited to the country by a court of law invoking the powers of interim bail under section 438 CrPC and that it is the duty of the prosecuting agency to book such a person.

Since a different view has been taken in Vijay Babu’s case (supra), the Court framed the following questions of law and requested the Registry to refer the same to the Chief Justice for adjudication by a larger Bench:

Therefore, the Court granted interim bail to the petitioner with the direction that in the event of arrest, the petitioner shall be released on bail on executing a bond of Rs.25,000 with two solvent sureties for the like sum. Additionally, the Court clarified that the Investigating officer is free to interrogate the petitioner for the purpose of investigation.

For the Respondent: Public Prosecutor 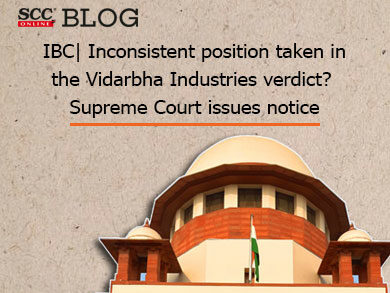 MP HC | Order in excess of powers under Section 39(1)(a) of M.P. Panchayat Raj Avam Gram Swaraj Adhiniyam is illegal