National Company Law Tribunal, Kolkata Bench I: The Bench of Rajasekhar V.K., judicial member and Balraj Joshi, technical member has held that no fresh legal proceeding can be initiated, including personal debts, and all pending legal action will be stayed during the interim moratorium period, as per Section 95 of the Insolvency and Bankruptcy Code, 2016 (IBC). The interim moratorium period commences from the date of filing of the application and continues until the application is rejected or admitted by the Adjudicating Authority.

In the present case, State Bank of India (‘SBI’) and Industrial Financial Corporation of India (‘IFCI’) filed two separate applications under Section 95 and Section 95(1) of the IBC for initiation of insolvency against Manoj Toshniwal (Personal Guarantor of EMC, EMC being the Corporate Debtor) on 09-07-2021 and 29-09-2021 respectively. In the application filed by SBI, a coordinate bench of the NCLT appointed a Resolution Professional (‘RP’) who was directed to file a report under Section 99 of IBC, by order of 14-01-2022 (‘SBI Order’). On 21-02-2022, the order was modified and a new RP was appointed. The NCLT also heard the application filed by the IFCI and appointed a different RP and directed him to submit the report vide order dated 17-02-2022 (‘IFCI Order’).

Meanwhile, Manoj Toshniwal also filed an application under Section 60(5) of IBC for setting aside the IFCI Order contending that by the virtue of the SBI Order, an interim moratorium period already commenced against the creditors ruling out initiation of any legal action against the personal guarantor with respect of any debt. Hence, the proceedings initiated by the IFCI must be stayed.

NCLT made the following observations-

Hence, the application made by Manoj Toshniwal, personal guarantor of corporate debtor was allowed by this Bench. As a result, the application by IFCI was stayed and the RP appointed on 17-02-2022 by the virtue of IFCI Order was discharged of his duties.

Utt HC | Stating provisions of Probation of Offenders Act, 1958 the Court cancels the remaining sentence of the convict; modifies order in appeal 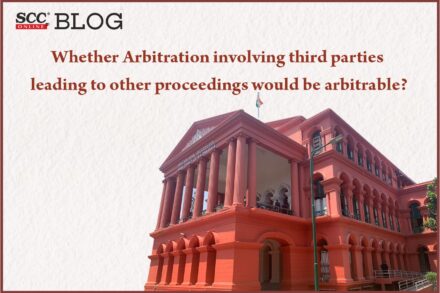 Whether Arbitration involving third parties leading to other proceedings would be arbitrable? Kar HC answers