Karnataka High Court: K.S. Mudagal, J., allowed the petition and set aside the impugned award awarding compensation as well as the silver medal allowance without considering the question of maintainability of the petition under Section 33C(2) of the I.D. Act.

The facts of the case are such that the respondent was working as a driver in the petitioner’s organization. On 03-03-2004, during the course of his duty, the bus driven by him met with an

accident on Bengaluru – Mangaluru route and he suffered injuries. The medical board issued certificate stating that due to the said injuries, the respondent cannot discharge his duty as driver. Thus, the petitioner assigned the respondent alternate light work. The petitioner treated the respondent’s period of absence from March 2004 to October 2005 as on duty and paid full salary. Admittedly, the respondent claimed compensation under Motor Vehicles Act and was awarded compensation with interest. The respondent got notice issued to the petitioner claiming compensation  with interest under the Employee’s Compensation Act, 1923 (for short ‘Act, 1923’) on the ground that he suffered disability during the course of employment. Then he preferred claim petition before the Labour Court Mangaluru under Section 33C (2) of the Industrial Dispute Act, 1947 (for short ‘the I.D.Act’) claiming compensation along with interest and Silver Medal Allowance. The Labour Court  allowed the claim petition and awarded compensation as well as the silver medal allowance without considering the question of maintainability of the petition under Section 33C(2) of the I.D. Act. Assailing this, the present petition was filed.

Counsel for petitioner Ms. Shwetha Anand submitted that Section 33C (1) and (2) of the ID Act shall be read in an integrated and holistic manner. Section 33C (2) of the Act can be invoked only in relation to an award or the settlement contemplated under Section 33C(1) of the I.D. Act. As the respondent did not perform the duty of driver, after the accident he was not entitled to silver medal allowance.

Counsel for respondent Mr. VS Naik submitted that Section 33C(2) of the I.D. Act is an independent provision and need not be preceded by an award. Irrespective of workmen getting compensation under the Motor Vehicle Act, he is entitled to claim under the Act, 1923.

The Labour Court has no jurisdiction to first decide the workmen’s entitlement and then proceed to compute the benefit so adjudicated on that basis in exercise of its power under Section 33C(2) of the Act. It is only when the entitlement has been earlier adjudicated or recognised by the employer and thereafter for the purpose of implementation or enforcement thereof some ambiguity requires interpretation that the interpretation is treated as incidental to the Labour Court’s power under Section 33C(2) like that of the Executing Court’s power to interpret the decree for the purpose of its execution.

“It is not competent to the Labour Court exercising jurisdiction under Section 33C(2) to arrogate to itself the functions of an industrial tribunal and entertain a claim which is not based on an existing right but which may appropriately be made the subject matter of an industrial dispute in a reference under Section 10 of the Act.”

The Court thus observed that in view of the respondent not performing the work as a driver and assignment of lighter work to him, whether he was entitled to silver medal allowance was a matter of adjudication. Therefore that could have been subject matter of a dispute under the I.D Act. Without such adjudication, in the light of the judgment of Supreme Court, the respondent could not have maintained the petition under Section 33C(2) of the I.D. Act.

Under Parents and Senior Citizens Act, is it necessary to find out whether property belongs to parent exclusively or is a shared household in which daughter-in-law has rights? Bom HC deciphers 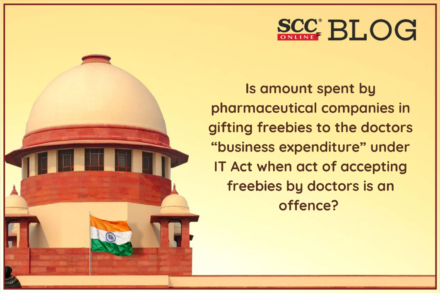 Is amount spent by pharmaceutical companies in gifting freebies to the doctors “business expenditure” under IT Act when act of accepting freebies by doctors is an offence? SC answers