Karnataka High Court: Rajendra Badamikar, J., reversed an order of the Magistrate which had directed the petitioner accused to deposit 20% of the cheque amount before the court. The High Court said that Section 143-A of the Negotiable Instruments Act, 1881 is not a mandatory provision.

The respondent herein had filed a private complaint before the Trial Court against the present petition for the offence punishable under Section 138 of the Negotiable Instruments Act, 1881.

As per the Respondent-Complainant, the petitioner accused had taken a hand loan of Rs 9 lakhs from the complainant in order to purchase a plot. But the sale deed was not executed and when complainant requested the accused-petitioner for repayment of the amount or else to execute the sale deed he issued a cheque and when the said cheque was presented through the banker of the complainant it was returned for insufficient funds.

Further, it was alleged that the complainant issued a legal notice calling upon the petitioner for payment within 15 days, but he failed to make any payment as such he filed a private complaint under Section 138 of NI Act.

Magistrate passed the impugned order directing the accused-petitioner to deposit 20% of the cheque amount before the Court.

High Court noted that the complaint was filed under Section 138 of NI Act in respect of bouncing of cheque issued by present accused of a sum of Rs 9 lakhs. After recording the sworn statement, the Magistrate took cognizance and issued the process against the accused/petitioner who appeared and enlarged on bail.

Present petitioner appeared before the Trial Court and was enlarged on bail and the matter was adjourned to 28-11-2019 for recording the plea. On that date, the counsel for the complainant/respondent herein filed an application under Section 143A of NI Act.

Magistrate’s order disclosed that as per the mandatory provisions of Section 143A he passed the impugned order for deposit of 20% of the cheque amount. It was noted that he did not hear the counsel for the accused and no opportunity of being heard was given to him.

Section 143A (1) is not a mandatory provision and it says that Court may order the drawer of the cheque to pay the interim compensation as per conditions stipulated there under.

In Court’s opinion, the entire approach of the Magistrate was against the settled principles of natural justice and he did not even pass a summary speaking order giving reasons for passing such an order.

mandatory provision of law but ignored the fact that the word used in the Section is ‘may’ and not ‘shall’ which gives a discretion to the Court to be exercised in a judicious way.

Therefore, the entire approach of magistrate was against the settled principles and the impugned order called for interference. [Jahangir v. Farooq Ahmed Abdul Razak, Criminal Petition No. 201213 of 2020, decided on 6-7-2021]

For the Petitioner: Sanjay A. Patil, Advocate

For the Respondent: S.S. Mamadapur, Advocate 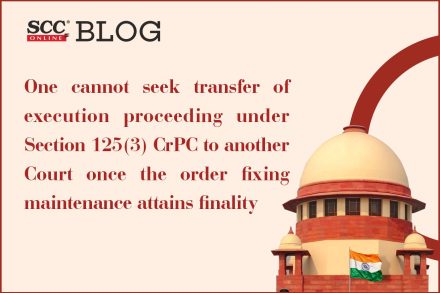 Contract of affiliation for commercial purposes can be perpetual as well as unilateral in nature: SC of Canada

Del HC | Wife entitled to lodge FIR under S. 498-A IPC from parental place where she takes refuge even in absence of allegation of harassment at the said place