Delhi High Court: Sanjeev Narula, J., refused to interfere in the interim arbitral award whereby the sole arbitrator had allowed certain claims of the respondent in arbitration proceedings against the appellant-IRCTC.

IRCTC sought the setting aside of the interim arbitral award, whereby Sole Arbitrator had allowed certain claims of the Respondent in arbitration proceedings.

Respondent, a private railway catering service provider empanelled with IRCTC and entitled to be considered for allotment of temporary licenses on category ‘A’ trains. on 07th September, 2016, IRCTC published a limited tender inviting bids from empanelled parties for providing on-board catering services in respect of Train No. 12951- 52/12953-54 (Rajdhani/August Kranti Express) for six months.

On being the highest bidder, respondent was awarded a temporary license.

What was the dispute?

Welcome drink served to the passengers was provided by IRCTC. Later, IRCTC decided that:

For the above-stated policy decision, DC raised the following concerns:

Later, on 13-2-2017, respondent intimated that it would provide the welcome drink in case the same would not be provided by IRCTC, but it would be charging for services as well as production charges for the same. In the event of train being late, charge of Rs 30 would be applied along with service tax for additional meal.

Further, it was added that, for a certain period when respondent did not provide the welcome drink and IRCTC had to provide the same, the charges in that respect would be adjusted against the bills raised by respondent.

Respondent raised an issue with regard to the above-stated, asserting that it was not liable for the charges. It further raised the issue of non-payment of service tax on service charge for food and drink for the period from 19th December 2016 to 04th March 2017, as well as other charges allegedly payable to it.

Respondent unconditionally accepted the policy decision and a 6-month extension of license was granted.

Respondent invoked arbitration with regard to deductions made on account of welcome drink as well as other issues. Hence, a petition was filed under Section 11 of the Arbitration and Conciliation Act.

What all were the claims?

Two claims of respondent were allowed: (i) payment with respect to welcome drink; and (ii) reimbursement of GST on production charges.

IRCTC filed an objection against the impugned award before District Judge at Patiala House Court Complex, Delhi, however, the claim calculated by IRCTC exceeded its pecuniary jurisdiction as per the provision of Section 12(2) of the Commercial Courts Acts, 2015.

Whether welcome drink formed a part of initial period of contract?

As per the tender document which refers to CC No. 32 of 14 states the Clause 2.1 requires the service provider to deliver free of cost catering to passengers.

Arbitrator meticulously examined the tender conditions, circulars issued by Railway Board, IRCTC’s policy, contractual provisions and testimonies of the witnesses and went on to answer the question in negative.

CC No. 32 of 14 dated 6-08-2014 laid down rates of composite contract for the service provider and noting the admitted position that catering services under the tender were invited through the mode of partial unbundling of services, the learned Arbitrator noted that respondent was required to provide quotations for the sector-wise services mentioned in Annexures, which had no direct or specific reference to the condition of providing a welcome drink. In the said circumstances, it was concluded that the bid was not invited for the service of provision of welcome drink, and thus no charge was quoted towards the same.

Arbitrator gave a finding that there was no contractual stipulation in the tender document that specifically put the obligation on respondent to provide welcome drink and the said finding was held to be sound, credible and comprehensive by the High Court.

the policy decision dated 07-02-2017 became a part of the contract between the parties has rightly been disallowed by the learned Arbitrator, by holding the same to be a fresh policy decision brought in by IRCTC post entering into the licensing agreement with DC. IRCTC could not give any justification for bearing the burden for the initial period between 19-12-2016 to 4-03-2017, despite it’s alleged understanding to the contrary. Its continued supply of welcome drink without expressly affirming that the contractual obligation for the job lay on DC, reaffirms the uncertainty of contractual obligations.

On the basis of the conduct and the testimony of witnesses, the Arbitrator rightly held that the actions of IRCTC exhibit ambiguity about DC’s contractually stipulated obligations, which were then redressed by way of the ex post facto policy decision.

The GST laws has replaced the erstwhile indirect taxation regime.

Respondent had explained that since the trains were moving through several states and each state had a different rate of tax under State VAT laws, it was not feasible to account for the same, therefore production charges were paid inclusive of taxes.

Besides, no Input Tax Credit was available to IRCTC for VAT.

However, the position underwent a change with the introduction of GST laws.

GST is available as Input Tax Credit for paying the outgoing tax liability. With restructuring of indirect tax system, railways introduced CC No. 44/17 which specifically provides for GST on catering services in the subject trains. The bifurcation of production charges was done under the afore-noted circular and it was advised that GST is to be reimbursed to the service provider on submission of proof of deposit.

the said circular specifies the revised catering apportionment charges for the trains in question where catering charges are built-in to the ticket fare. The table thereunder shows ‘catering charges disbursed to the service provider’ both with and without 18% GST in separate columns.

Hence, IRCTC’s contention that claim of service tax on production charges was identical and since the same had been given up, the claim of GST would not survive.

Further, it was added that,

Applicability of service tax on production charges is a different plea intertwined with determination of factual position of whether there is an incidence of service in the activity of production or if the nature of service could be held as a composite supply.

GST is clearly attracted on supply of food.

The claim of service tax over and above the amounts agreed to, was premised on a different footing and cannot be read at par with the claim of GST.

Arbitrator has given a finding that GST has been deposited by DC and proof thereof had been furnished to IRCTC. Court found no fault in interpretation of terms of contract. 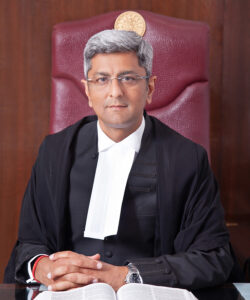 Born on 24th August, 1970. Studied at St. Mary’s Presentation Convent School, Jammu. Graduated in B.Sc.(Computer Science) from Kirorimal College, University of Delhi. He acquired Degree in Law in 1994 from Law Faculty, University of Jammu and got enrolled with Bar Council of Delhi in 1995.

Pat HC | When order is violative of principles of natural justice, plea of alternative remedy would not bar exercise of jurisdiction under Article 226

In order to convict a person for abetment of suicide, there has to be a clear mens rea to commit an offence