Delhi High Court: Subramonium Prasad, J., while allowing in part the revision petition filed challenging the Family Court’s maintenance order made a very crucial observation, that father’s obligation to maintain a child cannot come to an end once the child turns 18 years of age. Read more to know why.

Since the interim maintenance order was an interlocutory order, the respondent’s counsel submitted that the present application was barred under Section 397(2) CrPC.

Further, Bench elaborated with regard to other contention of children being entitled to 25% of salary earned by respondent, that, petitioner 1/wife who was earning and was equally responsible for the child can take care of the balance as respondent was married again and had a child from the second marriage.

Court cannot shut its eyes to the fact that the respondent has equal responsibility towards the child from the second marriage.

Petitioner 1/Wife was working as an Upper Division Clerk in Delhi Municipal Corporation earning Rs 60,000 per month and the two children were living with the mother and after the age of majority, entire expenditure of petitioner 2 was being borne by petitioner 1 as petitioner 2 turned major and was still studying but was not earning anything.

Therefore, the family court failed to appreciate that since the respondent was making no contribution towards the maintenance of petitioner 2, the salary earned by petitioner 1 was not sufficient to maintain herself.

Court cannot shut its eyes to the fact that at the age of 18 the education of petitioner 2 is not yet over and the petitioner 2 cannot sustain himself.

Bench held that it cannot be said that the obligation of the father would come to an end as the son reached 18 years of age and the entire burden of his education and other expenses would fall only on the mother.

Adding to the above analysis, it was stated that It is not reasonable to expect that the mother alone would bear the entire burden for herself and for the son with the small amount of maintenance given by the respondent herein towards the maintenance of his daughter.

Hence, Court granted a sum of Rs 15,000 per month as interim maintenance to petitioner 1 from the date of petitioner 2 attaining the age of majority till he completes his graduation or starts earning whichever is earlier. 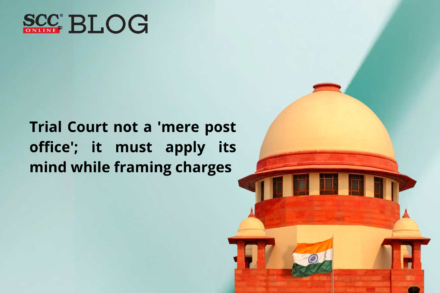 Trial Court not a ‘mere post office’; must apply its mind while framing charges: SC unimpressed with discharge of murder accused based on postmortem report only