“The domestic violence in this country is rampant and several women encounter violence in some form or the other or almost every day, however, it is the least reported form of cruel behavior. A woman resigns her fate to the never-ending cycle of enduring violence and discrimination as a daughter, a sister, a wife, a mother, a partner or a single woman in her lifetime.” Read more

Officers designated under Section 53 of the NDPS Act are “Police Officer” within the meaning of section 25 of the Evidence Act; SC holds in 2:1 verdict

“It would be remarkable that if a police officer, properly so-called, were to “investigate” an offence under the NDPS Act, all the safeguards contained in sections 161 to 164 of the CrPC would be available to the accused, but that if the same police officer or other designated officer under section 42 were to record confessional statements under section 67 of the NDPS Act, these safeguards would be thrown to the winds.” Read more

Hathras Gang Rape| CRPF to provide security to the victim’s family & witnesses; SC says apprehensions are not without justification

“… without casting any aspersions on the security personnel of the State Police; in order to allay all apprehensions and only as a confidence building measure, we find it appropriate to direct that the security to the victim’s family and the witnesses shall be provided by the CRPF within a week from today.” Read more

“Democracy and dissent go hand in hand, but then the demonstrations expressing dissent have to be in designated places alone. The present case was not even one of protests taking place in an undesignated area, but was a blockage of a public way which caused grave inconvenience to commuters. We cannot accept the plea of the applicants that an indeterminable number of people can assemble whenever they choose to protest.” Read more

In a 2:1 verdict, SC transfers custody of an 11-year-old to father living in Kenya; Justice Gupta, dissenting, says pampering is not parenting

While Indu Malhotra, J, for herself and UU Lalit, J, held that the child’s preferences are not given due regard to, it could have an adverse psychological impact on him, Justice Gupta disagreed & said that the child should stay with the mother who has quit her job to be with him 24×7 & not with the father and his parents who were inclined towards pampering the child. Read more

Mirror orders are passed to safeguard the interest of the child who is in transit from one jurisdiction to another.  Click here to read what a mirror order is.

The Insolvency and Bankruptcy Code is at a nascent stage and it is better that the interpretation of the provisions of the Code is taken up by the Supreme Court to avoid any confusion. Read more

COVID-19| SC says “system of Video Conferencing has been extremely successful”; alters only one guideline from April 6 order

“We must say the system of Video Conferencing has been extremely successful in providing access to justice.” Read more

Unless extended for “good reason”, stay by ‘any court’ automatically expires within a period of six months

The right to default bail is not a mere statutory right under the first proviso to Section 167(2) CrPC, but is part of the procedure established by law under Article 21 of the Constitution of India, which is, therefore, a fundamental right granted to an accused person to be released on bail once the conditions of the first proviso to Section 167(2) are fulfilled. Read more

SC holds NRI quota for admission to professional courses “neither sacrosanct, not inviolable”; private colleges have some elbow room

In order to do justice to all the parties, the Court directed that a special counselling session should be carried out by the board, confined or restricted to the seats in respect of which admissions were made pursuant to the single judge’s directions. Read more

“While balancing the competing claims, in our view, the Appellants must be allowed to go back to their courses of study otherwise the pendency of prosecution against them will add further penalty in the form of prejudicing their career. Any such adverse impact will negate their rights under Article 21 of the Constitution.” Read more

“To a worker who has faced the brunt of the pandemic and is currently laboring in a workplace without the luxury of physical distancing, economic dignity based on the rights available under the statute is the least that this Court can ensure them.” Read more

23 years after his wife’s death, a man walks free as SC sets aside his conviction for abetting her suicide based on ‘speculations’ and ‘inferences’

“The conviction of Appellant by the Trial Court as well as the High Court on the theory that the woman with two young kids might have committed suicide, possibly because of the harassment faced by her in the matrimonial house, is not at all borne out by the evidence in the case.” Read more

Is SLP against an order rejecting the review petition maintainable when main judgment is not under challenge? SC answers

“The right to receive a copy of such statement will arise only after cognizance is taken and at the stage contemplated by Sections 207 and 208 of the Code and not before.” Read more

“The history of the enactment of Section 167(2), CrPC and the safeguard of ‘default bail’ contained in the Proviso thereto is intrinsically linked to Article 21 and is nothing but a legislative exposition of the constitutional safeguard that no person shall be detained except in accordance with rule of law.” Read more

An offence committed by a ‘juvenile’ in 1981; three Juvenile Justice statutes and a legal conundrum on their applicability. Read how SC solved this riddle

Police constable acquitted in a murder case but dismissed from service after a related disciplinary enquiry. Read why SC upheld the dismissal

Does the custody of a child gets transferred from the mother to grand parents if they are assisting in looking after the child? Read what SC says

In a case dealing with the custody of a 7-year-old, the 3-judge bench of Dr. DY Chandrachud, Indu Malhotra and Indira Banerjee, JJ has said that mere fact that a mother is looking after the child with the assistance of her parents, does not detract from her role and responsibility as a mother. Read more

“All our counseling to Government and Government authorities have fallen on deaf ears”; SC on inordinate delay in filing appeals/petitions by Govt./State Authorities

“… if the Government machinery is so inefficient and incapable of filing appeals/petitions in time, the solution may lie in requesting the Legislature to expand the time period for filing limitation for Government authorities because of their gross incompetence. That is not so. Till the Statute subsists, the appeals/petitions have to be filed as per the Statues prescribed.” Read more

“What greater certificate of incompetence would there be for the legal Department!”; SC on State of MP “again and again” filing appeals after inordinate delay

“… it appears that all our counseling to Government and Government authorities have fallen on deaf ears i.e., the Supreme Court of India cannot be a place for the  Governments to walk in when they choose ignoring the period of limitation prescribed.” Read more

Is right to pre-emption a recurring right or exercisable only the first time? SC answers

Such a right is available once – whether to take it or leave it to a person having a right of pre-emption. If such person finds it is not worth once, it is not an open right available for all times to come to that person. Read more

Candidate declared unfit for the post of District Judge due to pendency of criminal case. Can they claim reconsideration after acquittal? Read what SC says

Mere fact that subsequently after more than a year when the person whose candidature has been cancelled has been acquitted cannot be a ground for reconsideration of his application by the High Court. Read more

Can the breach of audi alteram partem rule by itself lead to the conclusion that prejudice has been caused? SC elucidates

Natural justice is a flexible tool in the hands of the judiciary to reach out in fit cases to remedy injustice. The breach of the audi alteram partem rule cannot by itself, without more, lead to the conclusion that prejudice is thereby caused. Read more

Evidence has to be weighed and not counted

“There is no legal impediment in convicting a person on the sole testimony of a single witness. That is the logic of Section 134 of the Evidence Act, 1872. But if there are doubts about the testimony, Courts will insist on corroboration. It is not the number, the quantity but quality that is material.” Read more

To prove that cheque amount was larger than debt due, can defence of Issuer be looked at stage of issuing summons? Del HC explains 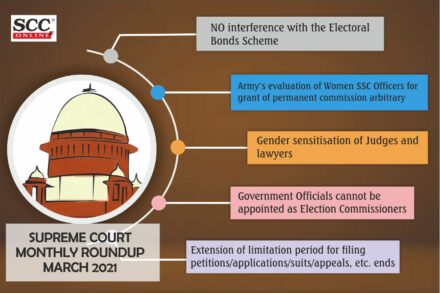