Supreme Court: In a case where a man was tried for and later acquitted from charges under Section 498A/406/34 IPC, the bench of Ashok Bhushan and MR Shah, JJ held that the apprehension that a stigma shall continue with the name of the appellant is misconceived, as stigma, if any, is already over by acquittal.

The appellant had challenged the order of the Principal Secretary, Madhya Pradesh, Law and Legislative Department declaring him ineligible for being appointed to the post of District Judge (Entry Level) and had sought reconsideration by the High Court of Madhya Pradesh. On this the Court said that the mere fact that subsequently after more than a year when the person whose candidature has been cancelled has been acquitted cannot be a ground for reconsideration of his application by the High Court.

Brief facts of the case

The appellant submitted an online form after the High Court of Madhya Pradesh issued an advertisement dated 09.03.2017 inviting applications for recruitment in the post of District Judge(Entry Level) in the cadre of Higher Judicial Service by Direct Recruitment from amongst the eligible Advocates.

Arguments advanced before the Supreme Court

“The appellant could not have been deprived of the employment after acquittal. There was no other material on record to indicate that antecedent or conduct of the appellant was not upto the mark. The High Court ought to have sent the matter back before the Higher Judicial Service and Examination-cum-Selection Committee for reconsideration.”

WHAT THE COURT SAID

On validity of the order declaring the appellant ineligible

The Court, however, noticed that the present is not a case where the name of the appellant was deleted in the select list on the ground of any concealment of criminal case against him. The name of the appellant was included in the select list which was forwarded to the State. The State after character verification submitted a report which report was considered on 18.07.2018 by the Administrative Committee (Higher Judicial Service) and Examination-cum-Selection and Appointment Committee and a resolution was taken that due to pendency of the case under Section 498A, 406-34 IPC on the basis of complaint filed by the wife, the appellant is not considered suitable for being appointed to the post of District Judge.

Stressing of the requirement that after declaration of the merit list the candidates have to be given appointments in time bound manner so that they may join the respective posts, the Court noticed that on the date when the Committee declared the appellant unsuitable, criminal case against him under Section 498A and 406 IPC was pending which was registered on a complaint filed by the appellant’s wife.

The character verification report was received from the State where pendency of the criminal case was mentioned which was the reason for the Committee to declare the appellant unsuitable.

“In the present case the acquittal having taken place after the close of recruitment process, there was no question of examining the acquittal order by the High Court at the time of finalizing the selection process.”

The Court noticed that there can be no dispute that in event it is found that decision by which the candidature of a candidate is rejected is arbitrary or actuated by malafide such decision can be interfered by the Constitutional Courts. However, the decision of Examination-cum-Section and Appointment Committee for holding the appellant unsuitable was based on the relevant consideration, i.e., a criminal case against the appellant under Section 498A/406/34 IPC was pending consideration which was registered on a complaint filed by the wife of the appellant.

“Such decision of the Committee was well within the jurisdiction and power of the Committee and cannot be said to be unsustainable. The mere fact that subsequently after more than a year when the person whose candidature has been cancelled has been acquitted cannot be a ground to turn the clock backward.”

On stigma attached with appellant’s name

It was argued before the Court that due to deletion of the name of appellant from select list a stigma is attached to him, for removal of which this Court may issue notice in this SLP. The Court, however, said that the appellant having already been acquitted by the judgment dated 18.09.2019 stigma of criminal case has already washed out and the criminal case having resulted in acquittal no stigma is attached to the appellant’s name on the above ground. 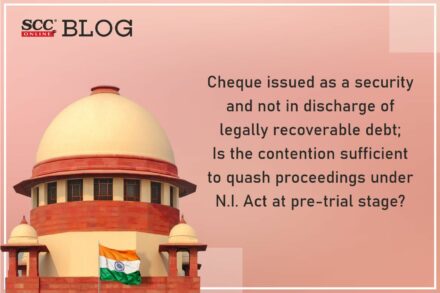 Cheque issued as a security and not in discharge of legally recoverable debt; Is the contention sufficient to quash proceedings under N.I. Act at pre-trial stage? SC examines