The instant petition is based on an FIR lodged against the accused. The charge-sheet was filed before the court of the Additional Judicial Commissioner, Special Judge under Sections 376(2)(f)/376(2)(i)/376(3) of the Penal Code and Sections 4 and 6 of the Protection of Children from Sexual Offences (‘POCSO’) Act, 2012.

A blind minor girl was gang raped in the year 2018 by her own family members, including her brother and uncle. The petition has been filed after finding her being pregnant praying for a shelter home to her for her safety and security. The prayer has also been made for direction of constituting a Medical Board for termination of the fetus and to appoint a senior female medical practitioner and social worker to take care of minor.

Seeing the nature of vulnerability of the minor, the Court, on 08-09-2022, directed the Rajendra Institute of Medical Sciences (‘RIMS’) Director to constitute a Medical Board to examine the minor and to find out whether pregnancy can be terminated or not.

RIMS further brought to the notice of the Court the mandate of Section 3 of the Medical Termination of Pregnancy Act, 1971 which stated that since the length of the pregnancy of the victim is over 28 weeks, termination of fetus is not permissible.

The Court considered the Medical Board report, which clearly mentioned that the termination of pregnancy is risky. The Court decided not to put the life of minorin danger. Further, the Court stated that this situation could have been avoided had the decision been taken at the appropriate time when the occurrence took place.

The Court further stated “Rape is a crime not only against a woman but against humanity at large as it brings out the most brutal, depraved and hideous aspects of human nature. It leaves a scar on the psyche of the victim and an adverse impact on society”.

The Court, in the interest of the victim and the unborn child, issued the following directions:

CESTAT | Demand of interest to be calculated from the date of determination of due amount till actual date of payment of duty; Tribunal allows appeal 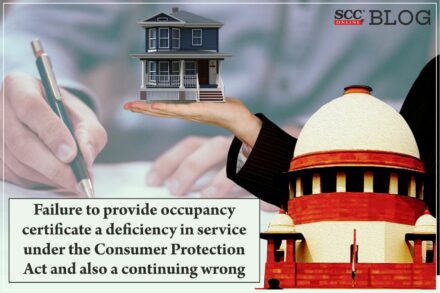 Failure to provide occupancy certificate a deficiency in service under the Consumer Protection Act and also a continuing wrong: SC