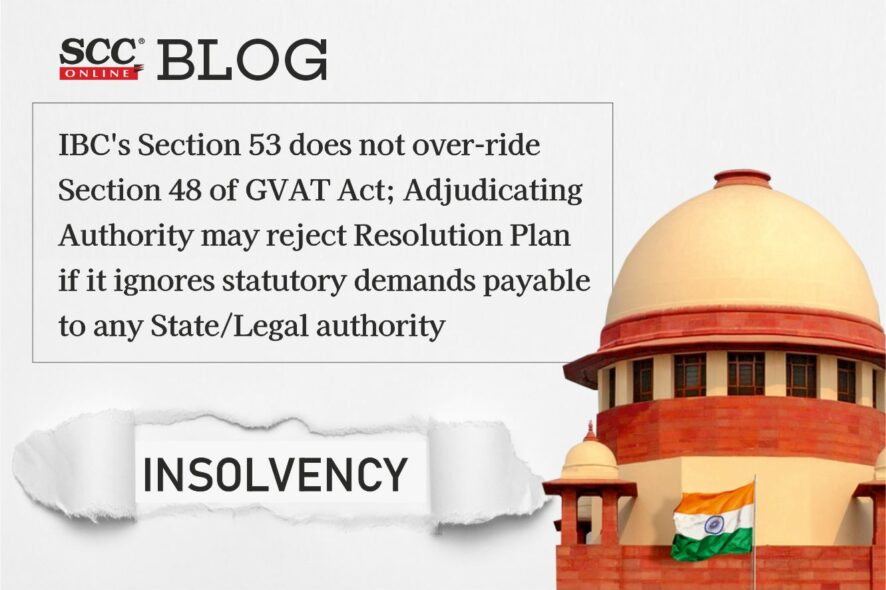 Supreme Court: The bench of Indira Banerjee* and AS Bopanna, JJ has reversed the NCLAT order wherein it was held that the Government cannot claim first charge over the property of the Corporate Debtor, as Section 48 of the Gujarat Value Added Tax, 2003 (GVAT Act), which provides for first charge on the property of a dealer in respect of any amount payable by the dealer on account of tax, interest, penalty etc. under the said GVAT Act, cannot prevail over Section 53 of the Insolvency and Bankruptcy Code, 2016 (IBC).

Holding that NCLAT clearly erred in its observation that Section 53 of the IBC over-rides Section 48 of the GVAT Act, the Court observed that, Section 48 of the GVAT Act is not contrary to or inconsistent with Section 53 or any other provisions of the IBC. Under Section 53(1)(b)(ii), the debts owed to a secured creditor, which would include the State under the GVAT Act, are to rank equally with other specified debts including debts on account of workman’s dues for a period of 24 months preceding the liquidation commencement date.

On the validity of a resolution plan which does not meet the requirements of Section 30(2) of the IBC, the Court held that the same would be invalid and not binding on the Central Government, any State Government, any statutory or other authority, any financial creditor, or other creditor to whom a debt in respect of dues arising under any law for the time being in force is owed. Such a resolution plan would not bind the State when there are outstanding statutory dues of a Corporate Debtor.

It was, hence, held that if the Resolution Plan ignores the statutory demands payable to any State Government or a legal authority, altogether, the Adjudicating Authority is bound to reject the Resolution Plan. Consequently, the Court observed that the Committee of Creditors, which might include financial institutions and other financial creditors, cannot secure their own dues at the cost of statutory dues owed to any Government or Governmental Authority or for that matter, any other dues.

Hence, if a company is unable to pay its debts, which should include its statutory dues to the Government and/or other authorities and there is no plan which contemplates dissipation of those debts in a phased manner, uniform proportional reduction, the company would necessarily have to be liquidated and its assets sold and distributed in the manner stipulated in Section 53 of the IBC.