Delhi High Court: In a case where permanent injunction was sought against use of Royal Champs, a Gwalior Distilleries Private Limited product (‘defendants’), selling whiskeys under a deceptively similar name and label design and using the goodwill of Royal Stag, a Seagram India Private Limited product (plaintiffs), Navin Chawla, J. decided the issue in favour of Royal Stag and direct defendants to pay damages of Rs 20 lakhs.

Royal Stag is a well-known whiskey sold under the label of SEAGRAM since 1995 by the company Seagram India Private Limited. In December 2001, Pernod Ricard SA (parent company of plaintiffs) acquired a part of Seagram group but continued to trade alcoholic beverages under SEAGRAM marks.

The trademark ROYAL STAG is a coined trademark, having no significance or meaning in common parlance, and no correlation to the character or quality of whiskey marketed there under. It was also stated by the plaintiffs that it constitutes an ‘original artistic work’ within the meaning of Section 2(c) of Copyright Act, 1957 (‘Copyright Act’).

The plaintiffs filed the present suit praying inter-alia for a decree of permanent injunction restraining the defendant, its directors, assigns in business, distributors, licensees and dealers from manufacturing, selling, offering for sale, advertising, directly or indirectly dealing in whiskey or any other alcoholic beverages under the impugned trade mark/logo/label SEAGRAM’S and/or ROYAL CHAMP or any other trade mark/logo/label as may be deceptively similar to the trademarks of the plaintiffs that is SEAGRAM’S or SEAGRAM’S logo or ROYAL STAG or its label amounting to infringement of trade marks registrations of the plaintiffs, passing off, unfair competition, as also infringement of copyright of the plaintiffs. The plaintiffs also prayed for rendition of accounts of profits earned by the defendant or in the alternative, a decree of Rs. 20 Lakh (Rupees Twenty Lakh only) and the costs of the suit.

The ROYAL STAG label comprises of a cream background with a prominent device of a thick swirling ribbon downwardly in burgundy and golden colours and the trademark ROYAL STAG represented upon the burgundy surface of the ribbon in bold cream colour letterings; and the SEAGRAM Marks depicted at the top of the label as also the bottom. 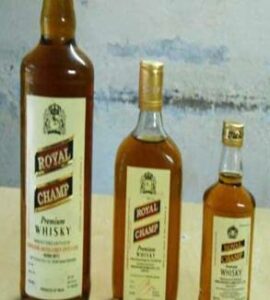 Placing reliance on Mondelez India Foods Pvt Ltd v. Neeraj Food Products, (2022) SCC OnLine Del 2199, the Court noted that in the present case, the goods of the plaintiffs and defendant are identical, that is whiskey. The mark of the defendant is deceptively similar to that of the plaintiffs. The test to be applied for judging the claim of infringement and passing off is of an unwary consumer with average intelligence and imperfect recollection.

The Court applied the above test to note that mere use of the word ‘CHAMP’ instead of ‘STAG’ is not sufficient to distinguish the two marks, especially when combined with the overall get up of the label. The goods are sold over the counter and an unwary consumer is likely to confuse one for the other.

The Court further held that the label of the defendant is a colourable and slavish imitation of the plaintiffs’ ROYAL STAG label and also amounts to copyright infringement under Section 51 read with Section 55 of the Copyright Act.

The Court remarked “the adoption by the defendant of the trademarks ROYAL CHAMP and the deceptively-similar logo to the SEAGRAM logo of the plaintiffs was clearly intended to deceive the unwary consumer and to ride on the reputation and goodwill of the plaintiffs.”

COVID 19 | All HC takes cognizance of adverse affect of COVID 19 on advocates, issues notice to Bar Councils in the State asking for steps taken by them for welfare of advocates