Supreme Court: In an unfortunate incident in 2017, a class II student was found with his throat slit in the bathroom of his school. A class XI student, aged 16 years and 5 months on the date of the incident, was arrested. The Supreme Court was called upon to examine the preliminary assessment made under Section 15 of the Juvenile Justice (Care and Protection of Children) Act, 2015. The bench of Dinesh Maheshwari and Vikram Nath*, JJ has asked the Central Government and the National Commission for Protection of Child Rights and the State Commission for Protection of Child Rights to consider issuing guidelines or directions in this regard which may assist and facilitate the Board in making the preliminary assessment under section 15 of the Act, 2015.

It is important to note that Section 15 of the Act, 2015 mandates that where a child in conflict with law has committed a heinous offence and is above the age of 16 years, the Board would make a preliminary assessment and pass appropriate orders in accordance with the provisions of sub-section (3) of section 18 of the Act, 2015.

In the present case, both the conditions required under section 15 of the Act, 2015 were fulfilled and the Board proceeded to pass an order holding that there was need of trial of respondent as an adult and accordingly, directed for transfer of papers to the Children’s Court. The Children’s Court also upheld the decision of the Board and dismissed the appeal.

The Punjab and Haryana High Court, however, allowed the Revision, set aside the orders passed by the Board as also the Children’s Court and remanded the matter to the Board for a fresh consideration.

Providing copies of material on record to the child

In the case at hand, the Board and the Children’s Court relied upon section 99 of the Act, 2015 to hold that they were not required to provide the copies of the material on record available in the form of Social Investigation Report (SIR), the report of the psychologist, and other material. On the other hand, the High Court relied upon rule 10(5) of the Model Rules to hold that the documents ought to have been provided to the child or his guardian or his lawyer as the case may be, and this having not been done, it was a case where reasonable opportunity had been denied.

The Supreme Court observed that

“Maintaining confidentiality has a different purpose but in no case can it be said that to maintain confidentiality, the relevant material would not be provided to the child or his guardian or parents. It would be in complete contravention of the settled principles of criminal jurisprudence. Concept of confidentiality used in Section 99 is to prevent the reports from coming in public domain or shared in public. Its availability will be confined to the parties to the proceedings and the parties should also refrain from sharing it with third parties.”

Mental capacity and the ability to understand the consequences – Distinguished

“Cognitive maturation is highly dependent on hereditary factors. Emotional development is less likely to affect cognitive maturation. However, if emotions are too intense and the child is unable to regulate   emotions effectively, then intellectual insight/knowledge may take a back seat.”

In the case at hand, the Board and the Children’s Court apparently were of the view that the mental capacity and the ability to understand the consequences of the offence were one and the same, that is to say that if the child had the mental capacity to commit the offence, then he automatically had the   capacity to understand the consequences of the offence.  This, in Court’s opinion, was a grave error committed by them.

“A child with average intelligence/IQ will have the intellectual knowledge of the consequences of his actions. But whether or not he is able to control himself or his actions will depend on his level of emotional competence. For example, risky driving may result in an accident. But if emotional competence is not high, the urge for thrill seeking may get the better of his intellectual understanding.”

Holding that the process of taking a decision on which the fate of the child in conflict with law precariously rests, should not be taken without conducting a meticulous psychological evaluation, the Court observed that,

“Research shows that young people do know risks to themselves. Despite this knowledge, adolescents engage in riskier behaviour than adults (such as drug and alcohol use, unsafe sexual activity, dangerous driving and/or delinquent behaviour). While they do consider risks cognitively (by weighing up the potential risks and rewards of a particular act), their decisions / actions may be more heavily influenced by social (e.g. peer influences) and/or emotional (e.g. impulsive) tendencies.”

Guidelines for preliminary assessment under Section 15 of the 2015 Act

While the Court did not agree with the reasoning given by the High Court on all counts and also the direction given for conducting further tests, it, however, agreed with the ultimate result of the High Court in remanding the matter for a fresh consideration after rectifying the errors on lack of adequate opportunity.

In the case at hand, the High Court remanded the matter 3½ years ago and also directed for getting further examination of the child, and this exercise was to be undertaken within 6 weeks. Due to lapse of time, the Court observed that it was not in a position to give an opinion as to whether any further test can be carried out at this stage as the age of the child is now more than 21 years. However, it left it to the discretion of the Board or the psychologist who may be consulted as to whether any fresh examination would be of any relevance/assistance or not.

All HC | Dying Declaration: Administration of oath to the deceased before recording his declaration, does not render its credibility doubtful 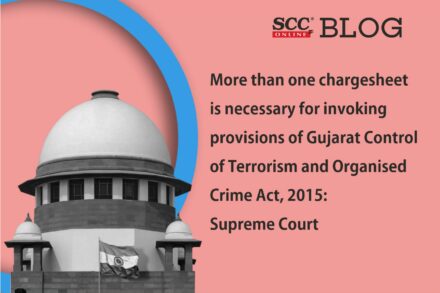 More than one chargesheet is necessary for invoking provisions of Gujarat Control of Terrorism and Organised Crime Act, 2015: Supreme Court