Bombay High Court: Bharati Dangre, J. dismissed an appeal which was filed by Board of Control for Cricket of India (‘BCCI’), being aggrieved by the impugned judgment and order passed by the Employees Insurance Court at Bombay (ESI Court) dated 09-09-2021 where BCCI was held to be under the ambit of Employees’ State Insurance Act, 1948.

In the month of April-May 2011, the Board office was surveyed by the Insurance Inspector and it was communicated that the BCCI is covered under the provisions of ESI Act with effect from 01-01-2007 and it was allotted a Code number, indicating applicability of the provisions of ESI Act, 1948 to the Board. Subsequently, a notice was sent in proforma C-18 dated 01-07-2014, claiming contribution amount to the tune of Rs 5,04,075 as Employees State Insurance Contribution for the period commencing from May 2007 to March 2014.

BCCI, a society registered under the provisions of Tamil Nadu Societies Registration Act, 1975 in Central Chennai claims to be a National Government Body for Cricketand that since it is a governing body for cricket in India and its primary object is to administer, promote and control the game of cricket throughout the country, including women’s cricket and to encourage formation of State, regional and other cricket associations and therefore, it is not covered or registered as ‘shop’ under the provisions of Mumbai Shop and Establishment Act, 1948. It was the claim of the appellant that it is not primarily engaged or involved in any trading or commercial activities and therefore, by no stretch of imagination, can it be covered within the meaning of Section 1(5) of the ESI Act, 1948.

The Court perused the ESI Act, 1948 and explained that it seeks to attain maintenance of health of an insured workman, recognizing the right to medical benefit as a fundamental right under the Constitution and confer certain benefits upon the employee in case of sickness, maternity and employment injury and to make provision for certain other benefits. Thus, the enactment is intended to operate as a beneficial piece of legislation to attain general welfare of the employees.

The Court opined that the nature of the Board can be very well discerned from its Memorandum of Association and Rules and Regulations. The Court noted that a specific admission had come on record from the witness that the Board is receiving income from the IPL matches and IPL franchise team is also making payment of fixed percentage/share of their respective income to the Board.

The Court applied the analogy that was used in the case of Bangalore Turf Club Ltd. v. ESI Corpn., (2014) 9 SCC 657 where judicial meaning was assigned to the term ‘shop’ and held that on ascertaining BCCI’s nature, functioning and object, it can be seen that the appellant is carrying out a business/commercial activity and earn money out of the said activity.

Though the Memorandum of Association prescribe that the income, funds and properties of the BCCI shall be utilized and applied solely for promotion of objects of BCCI, to aid and assist financially, or otherwise to promote, encourage, advance and develop the game of cricket, the fact that the Board engages itself in it’s various activities as indicated above, being purely commercial in nature, there is no reason why the test as laid down by the Hon’ble Apex Court in case of Bangalore Turf Club Ltd (supra), shall not be applied to it since the matches arranged and supervised by the Board enjoy future viewership of entertainment and that too, for a consideration, i.e. on purchase of the tickets.

The Court dismissed the appeal and held that the nature of activities conducted by the Board are commercial in nature and hence, covered under the term ‘shop’ for the purpose of ESI Act and notification issued thereunder. The Court upheld the decision of the ESI court to hold that BCCI falls under the ambit of ESI Act. 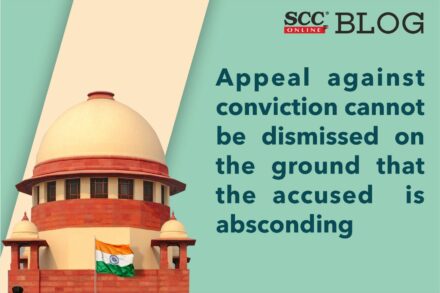 Appeal against conviction cannot be dismissed on the ground that the accused is absconding: Supreme Court

Policies concerning armed forces can be duly modified to ensure discipline in the Force and maintain its uniformity without any distinction of caste, creed, religion and sex