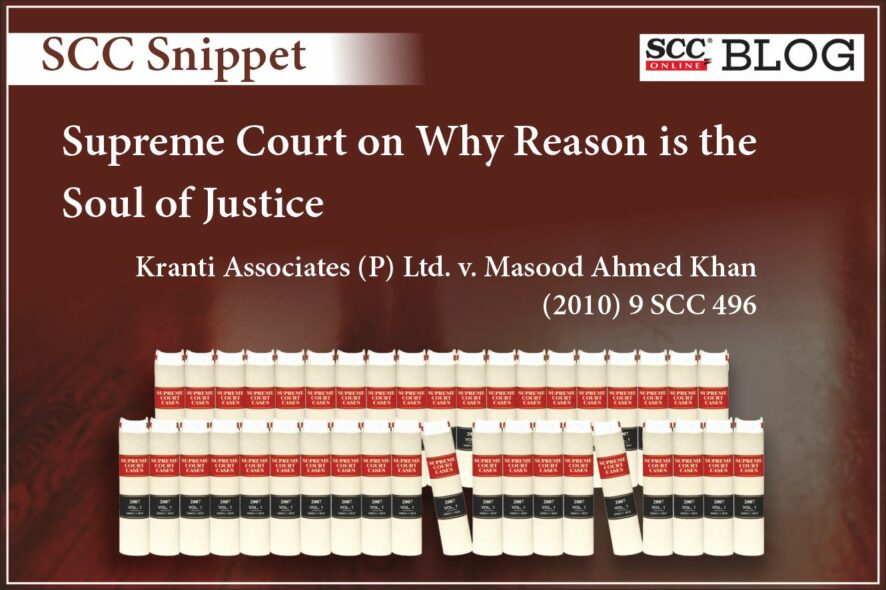 The bench of GS Singhvi and AK Ganguly, JJ, in Kranti Associates Private Limited v. Masood Ahmed Khan, (2010) 9 SCC 496, stressed upon the importance of reasoned judicial orders and elaborated on why “reason is the soul of justice.”

The Court summarized the following points:

(a) Insistence on recording of reasons is meant to serve the wider principle of justice that justice must not only be done it must also appear to be done as well.

(b) Recording of reasons also operates as a valid restraint on any possible arbitrary exercise of judicial and quasi-judicial or even administrative power.

(c) Reasons reassure that discretion has been exercised by the decision-maker on relevant grounds and by disregarding extraneous considerations.

(d) Reasons have virtually become as indispensable a component of a decision-making process as observing principles of natural justice by judicial, quasi-judicial and even by administrative bodies.

(f) The ongoing judicial trend in all countries committed to rule of law and constitutional governance is in favour of reasoned decisions based on relevant facts. This is virtually the lifeblood of judicial decision-making justifying the principle that reason is the soul of justice.

Read the 15 points summarized by the Court here.