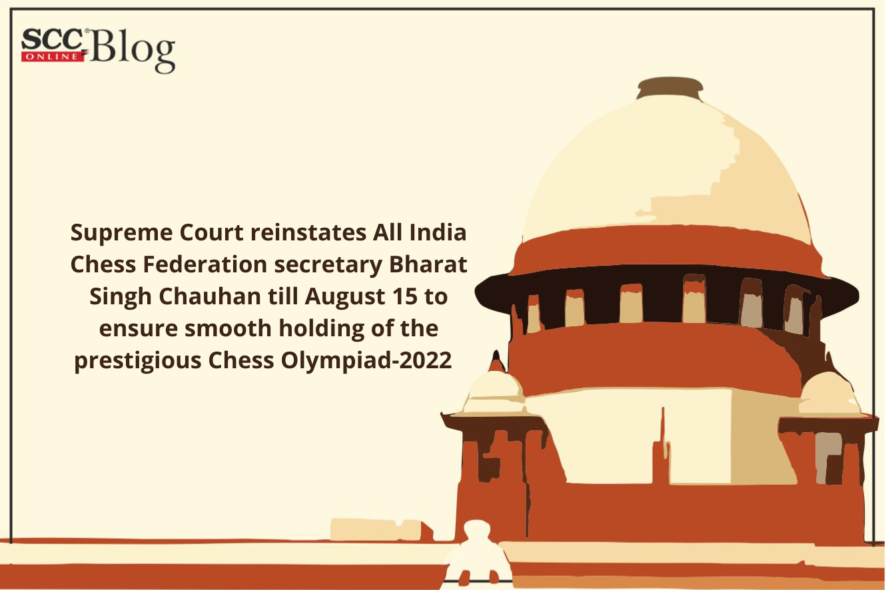 The Court took the decision in the light of the fact that a prestigious Chess Olympiad is to be held in the country and the same should not be affected because of any structural anomaly in the National Sports Federation (NSF).

Noticeably, the Central Government had by an order dated 21-04-2022 extended the accreditation of the AICF as a National Sports Federation.

Bharat Singh Chauhan, the appellant herein, had held the position of the post of Secretary of the NSF from 2017 to 2021. In the Letters Patent Appeal (LPA), the Delhi High Court held that in terms of the Sports Code, he ought to have secured the two-thirds majority of the members of the NSF for his second successive term.

However, in the elections for the period 2020-2023, he had secured merely 35 votes, which was not the two-thirds majority, as it should have been 44 votes out of the total number of 64 votes polled.  The High Court observed that the appellant was declared elected for the second successive tenure in 2021 to the same position but without having secured the two-thirds majority, which was against the Sports Code. Hence, the High Court held that the appellant could not be recognized as or continue as Secretary of NSF.

The appellant also contended that the High Court had entertained the LPA even when the main writ petition was pending before the Single Judge, which is not maintainable. Further, the appellant submitted that the Single Judge had rejected the prayer for interim relief, awaiting the further affidavit to be filed on behalf of the Union of India and the question in respect of interim injunction was yet to be considered by the single Judge.

In the light of the above facts and contentions, the Court allowed the Central Government and the appellant to file a detailed affidavit before the Division Bench of the High Court in LPA within a period of four weeks. The High Court was directed to pass a fresh order thereafter, including the grant of any interim order after giving an opportunity to all the concerned within a period of four weeks thereafter.

Noting that the Nation is holding a prestigious Chess Olympiad in the Country from 28-07-2022 to 10-08-2022, the Court directed the appellant to be continued as a Secretary of the Federation till 15-08-2022 by way of interim arrangement only to ensure that the program may not be affected further in any manner.