Supreme Court: The bench of BR Gavai and Hima Kohli*, J has held that while deciding a case relating to right to private defence, the Court’s assessment would be guided by several circumstances including the position on the spot at the relevant point in time, the nature of apprehension in the mind of the accused, the kind of situation that the accused was seeking to ward off, the confusion created by the situation that had suddenly cropped up resulting the in knee jerk reaction of the accused, the nature of the overt acts of the party who had threatened the accused resulting in his resorting to immediate defensive action, etc.

While the burden is on the accused, the accused need not prove the existence of private self-defence beyond reasonable doubt. It would suffice if he could show that the preponderance of probabilities is in favour of his plea, just as in a civil case.

Explaining the scope of the right of private defence, the Court observed that it is necessarily a defensive right which is available only when the circumstances so justify it. Such a right would be available to the accused when he or his property is faced with a danger and there is little scope of the State machinery coming to his aid.

While it was observed that the courts must keep in mind that the extent of the violence used by the accused for defending himself or his property should be in proportion to the injury apprehended, it was made clear that,

“This is not to say that a step-to-step analysis of the injury that was apprehended and the violence used is required to be undertaken by the Court; nor is it feasible to prescribe specific parameters for determining whether the steps taken by the accused to invoke private self-defence and the extent of force used by him was proper or not.”

In the case at hand, the appellant, at the relevant time, was posted at BOP Bamutia, Tripura, which is adjoining to the border of Bangladesh, an area marred by rampant smuggling. The records reveal that border fencing in the area in question had been erected just a few months before the incident had taken place. Prior to that, many villagers used to freely indulge in smuggling activities by crossing over to the Bangladesh side and vice versa.

The deceased used to indulge in smuggling activities and his name was mentioned in the list of smugglers maintained by the BSF. While on patrolling duty in the early hours of 5th June, 2004, the appellant admitted to have fired from his rifle at the deceased, who died as a result of the firearm injuries. He submitted that he noticed 6-7 persons crossing over from Bangladesh by cutting across the International border, who had tried to ‘gherao’ him and were armed with weapons like ‘’Bhala’, ‘Dah’ and ‘Lathi’. They managed to surround the appellant, who was closer to them. Apprehending an imminent and real threat to his life, the appellant had fired from his rifle at the intruders in self defence and the deceased who was a part of the group, sustained bullet injuries and had fallen on the ground.

On a broad conspectus of the events as they had unfolded and the testimonies of the witnesses, the Court held that the right of private self defence would be available to the appellant keeping in mind preponderance of probabilities that leans in favour of the appellant. In a fact situation where he was suddenly confronted by a group of intruders, who had come menacingly close to him, were armed with weapons and ready to launch an assault on him, he was left with no other option but to save his life by firing at them from his rifle and in the process two of the shots had pierced through the deceased, causing his death.

Hence, the appellant ought not to have been convicted for having committed the murder of the deceased. Rather, the offence made out is of culpable homicide not amounting to murder under Exception 2 to Section 300 IPC, thereby attracting the provisions of Section 304 IPC.

Considering that by the time the appellant was granted bail by the Supreme Court on 4th July, 2016, he had already suffered incarceration for a period of over eleven years, the Court observed that given the peculiar facts and circumstances of the present case, the same is considered sufficient punishment for the offence. The Court, hence, set the appellant free for the period already undergone.

Liability under Section 140 of the Motor Vehicles Act, 1988 does not arise in case of an unidentified offending vehicle

UK Supreme Court rules in favour of Government, says the capturing of Afgan Nationals by British troops is Crown act of State 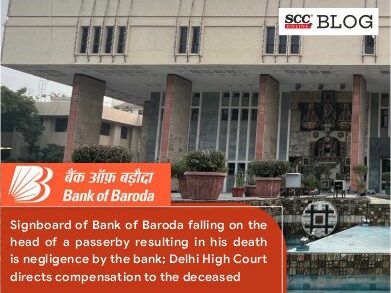 Signboard of Bank of Baroda falling on the head of a passerby resulting in his death is negligence by the bank; Delhi High Court directs compensation to the deceased