In a pertinent decision, Supreme Court while rejecting claim for interest the compared it to the Shakespearean character Shylock and remarked,

Arbitration and Conciliation Act, 1996 — S. 12(5) r/w Seventh Schedule and Ss. 11, 14 and 15 — Neutrality of arbitrators: Arbitral Tribunal comprising of the officers of one of the parties are not eligible to continue as such even when such Arbitral Tribunal stood constituted prior to 23-10-2015 i.e. prior to the Amendment Act, 2015 coming into force. Further, the earlier Arbitral Tribunal having lost its mandate cannot be permitted to continue and therefore a fresh arbitrator has to be appointed. [Ellora Paper Mills Ltd. v. State of M.P., (2022) 3 SCC 1]

Arbitration and Conciliation Act, 1996— S. 11(6): Appointment of arbitrator by parties and arbitration proceedings pursuant thereto, when valid, even after filing of an application under S. 11(6), explained. Relevance of non-pursuing of such application, and filing of statement of claim by applicant before Arbitral Tribunal constituted during pendency of S. 11(6) application, determined. When settled principle of law i.e. that after an application has been filed for appointment of an arbitrator under S. 11(6), the party concerned forfeits its right to appoint an arbitrator, can be deviated from, expounded. [Durga Welding Works v. Railway Electrification, (2022) 3 SCC 98]

Civil Procedure Code, 1908 — Or. 41 R. 31 — First appeal — Reasons to be assigned for decision by first appellate court — Mandatory requirement of compliance with Or. 41 R. 31: First appellate court is mandatorily required to comply with requirements of Or. 41 R. 31 and non-observance of these requirements lead to infirmity in judgment. Appellate court’s jurisdiction involves a rehearing of appeal on questions of law as well as fact. First appeal is a valuable right, and, at that stage, all questions of fact and law decided by trial court are open for reconsideration. Judgment of appellate court must, therefore, reflect conscious application of mind and must record court’s findings, supported by reasons for its decision in respect of all issues, along with contentions put forth and pressed by parties. [Manjula v. Shyamsundar, (2022) 3 SCC 90]

Constitution of India — Arts. 323-A and 323-B: Power of scrutiny of Tribunals created under this provision lies only with Division Bench of High Court within whose jurisdiction Tribunal concerned falls. [Union of India v. Alapan Bandyopadhyay, (2022) 3 SCC 133]

Hindu Marriage Act, 1955 — Ss. 13(1)(i-a) and (i-b): In this case, there was concurrent findings of courts below on cruelty and desertion and irretrievable breakdown of marriage was also taking place. Hence, it was held that no interference was called for with divorce decree. [Neha Tyagi v. Deepak Tyagi, (2022) 3 SCC 86]

Mines and Minerals — Illegal mining — Violation of environmental law: Permissibility and validity of ban on mining activities by earlier Court order when mining operations conducted despite such ban based on rider or stopgap arrangement permitted by Court with regard to sand mining considering its importance in construction activities and loss to public exchequer, explained. [State of Bihar v. Pawan Kumar, (2022) 3 SCC 102]

Penal Code, 1860 — S. 304 Pt. II and S. 300 Exceptions 2 and 4: In this case of culpable homicide not amounting to murder, there was no pre-meditation or pre-planning and incident was result of sudden quarrel in which accused exercised his right of private defence, but exceeded the limit. Hence, while confirming conviction under S. 304 Pt. II, sentence modified to 2 yrs’ RI with fine of Rs 5000 and default stipulation of 3 months’ RI. [Govindan v. State, (2022) 3 SCC 82]

Penal Code, 1860 — S. 498-A: In this case, victim immolating herself in her matrimonial home leading to her death in hospital. Concurrent findings of facts recorded by both courts below on harassment and/or torture and/or cruelty by appellant mother-in-law of victim, on appreciation of evidence, stand established. Therefore, appellant, held, rightly convicted under S. 498-A. [Meera v. State, (2022) 3 SCC 93]

Practice and Procedure — Delay/Laches/Limitation — Filing of petitions/applications/suits/appeals/all other proceedings: There was extension of limitation period for all proceedings before courts and tribunals due to COVID-19 Pandemic. Earlier order dt. 23-3-2020, (2020) 19 SCC 10, extending such limitation period, though was brought to an end by order dt. 8-3-2021, order dt. 23-3-2020, held, restored due to spread of the new variant of COVID-19, drastic surge in the number of COVID cases across the country and adversities faced by litigants in the prevailing conditions.  Said restoration shall be as per directions and clarifications. [Cognizance for Extension of Limitation, In re, (2022) 3 SCC 117]

Practice and Procedure — State as a Litigant/Party — Delay/Laches/Limitation — Unexplained delay by Revenue/State: Supreme Court has already categorised these cases as “certificate cases”, hence held, appeal is not maintainable under Art. 136 of the Constitution. [Commr. of Customs v. Volex Interconnect (India) (P) Ltd., (2022) 3 SCC 159]

Reserve Bank of India Act, 1934 — S. 45-MB — RBI Circulars/Guidelines/Directions: For “public interest” RBI is empowered to issue any directive to any banking institution, and to prohibit alienation of an NBFC’s property. Further, RBI has wide supervisory powers over financial institutions like SIDBI (defendant), in furtherance of which, any direction issued by RBI, deriving power from the RBI Act or the Banking Regulation Act is statutorily binding on the defendant. [Small Industries Development Bank of India v. SIBCO Investment (P) Ltd., (2022) 3 SCC 56]

Service Law — Departmental Enquiry — Employee’s right of representation — Right to be represented by counsel of one’s choice — Extent of: There is no absolute right in favour of delinquent officer to be represented by counsel of his choice in departmental proceedings and same can be restricted by employer. Only requirement is that delinquent officer must get fair opportunity to represent his case. [Rajasthan Marudhara Gramin Bank v. Ramesh Chandra Meena, (2022) 3 SCC 44]

Specific Relief Act, 1963 — S. 19(b): Suit for specific performance against whom not enforceable: Specific performance, held, cannot be enforced against such purchaser or their transferees as they would fall within exception of transferee for value who had paid money in good faith and without notice of original contract. [Seethakathi Trust Madras v. Krishnaveni, (2022) 3 SCC 150] 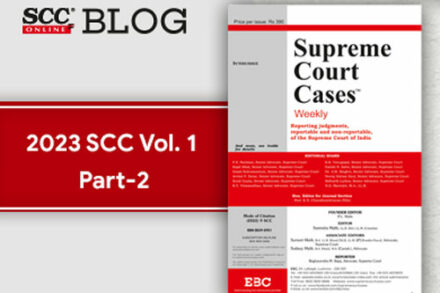