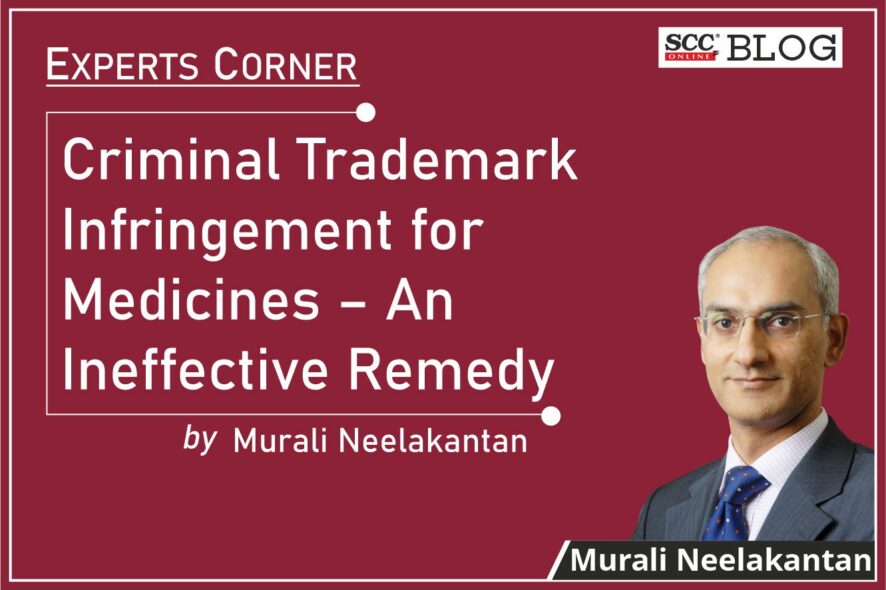 There has been little research on why convictions for trade mark infringement are not common when there are a large number of civil infringement cases. Our particular interest is in cases of drugs and medicines, which is the class where it seems the most number of trade marks are registered every year[1].

Is it because the process of FIR, investigation and prosecution is cumbersome, or because the justice ecosystem does not consider this as a priority and trade mark owners do not feel that the time, effort and money invested in seeking conviction is worth it? Is there an alternative and more effective system for preventing trade mark infringement and enforcement against truant entities which misbrand drugs to unfairly benefit from well-known and market leading brands?

The process of prosecution for criminal infringement of trade marks begins with the complaint to the police who will register an FIR citing various provisions of the Penal Code, 1860, Copyright Act, 1957 and the Trade Marks Act, 1999, if the complaint has the facts making out the offence[2]. If the complainant has done enough investigation and has invoices for the infringing products, the police may decide to arrest the accused persons since the offence is cognizable and non-bailable. The arrest may happen during or after a “raid” to seize the goods that are allegedly infringing the complainant’s trade mark[3]. However, before the police can do this, a report from the Registrar of Trade Marks opining that the alleged infringement has occurred is necessary[4]. This could take weeks to obtain during which time, the infringing goods may no longer be in the place where the complainant claims. It will require enormous resources to be able to maintain surveillance of the facilities, products and people involved in the illegal operation. Does the police force have such resources to devote to this? Does the police force have the expertise to deal with this crime? Even once the report of the Registrar is obtained and the opinion there is that the goods are infringing, that opinion itself is open to challenge. Given the lack of clarity from the courts on what the test for infringement is and the decisions in various cases, it is almost impossible to be sure if the opinion of the Registrar is correct.

In a recent poll of senior police officers who were asked to opine if the following trade marks were infringing and caused confusion, the majority got it “wrong” i.e. their decision was the opposite of what the High Courts or Supreme Court held in that case.

The brand names, Vihagra[5], V-GRA[6], Filagra and Vilagra[7] are confusingly similar to Viagra but Penegra[8] is not and Kavagra is easily confused with Kamagra even though all these brands are for a Schedule H drug which can only be purchased with a doctor’s prescription[9].

Despite Section 13 of the Trade Marks Act which prohibits the appropriation of chemical names as trade marks, it is common practice to name a drug by the name of the organ (“Liv” for the liver, for example) or the ailment which it treats or the main ingredient of the drug. Such an organ, ailment or ingredient being publici juris or generic cannot be owned by anyone for use as trade mark.[10]

As a result of the Trade Marks Registry allowing brand names using the primary chemical compound, organ or ailment to be registered there is a proliferation of similar and often confusing trade marks for a drug. A recent example is of the drug, Molnupiravir, a pill to treat COVID. Applying the test of a common man, would not these marks be confusing even for doctors who shorten the medicine to “molnu”?

This is not a new or “one-off” incident. The brands, “Trivedon” and “Flavedon” were said to be dissimilar[11]. This followed a case where “Mexate” and “Zexate” were also found to be dissimilar[12] even though the brand names were rhyming words. The Delhi High Court[13] held that the two marks  derived prefix “Mero” from the drug “Meropenem” and there was no similarity between “Meromer” and “Meronem”. This principle was consistently followed in Schering Corpn. v.  Alkem Laboratories Ltd.[14], where it was held that there was no similarity between “Temodal” and “Temodar” since the prefix derived from the name of the chemical compound Temozolomide to arrive at “Temodal” and “Temodar” on the one hand and “Temoget” and “Temokem” on the other. The leading case on this subject is Cadila Health Care Ltd. v. Cadila Pharmaceuticals Ltd.[15] which is routinely cited by subsequent decisions. In that case, the petitioner manufactured the drug branded as “Falcigo” for the treatment of cerebral malaria, commonly referred to as “Falciparum” and registered the name “Falcigo” in 1996. The respondent also was engaged in manufacturing a drug named “Falcitab”, and got it registered in 1997, also for the treatment of “Falciparum” malaria. This is an interesting case of registered trade marks for the same drug causing infringement, a sharp comment on India’s Trade Marks Registry and the drug regulator.

However, in Ranbaxy Laboratories Ltd. v. V. Anand Prasad[16] the appellant was the registered proprietor of the mark “Fortwin” (Pentazocine injection) and had been using the mark since 1975, relating to pharmaceutical preparation for treatment of some bone-related disorder. The respondent applied for the registration of mark “Ostwin” (Diacerein tablet), again for the same treatment of bones, which was opposed to by the appellants as being deceptively similar to their mark. IPAB held that, “though prefix of both the marks are different i.e. ‘Fort’ (appellant) and ‘Ost’ (respondent), they do have a common suffix i.e. ‘Win’ and since the rival goods are also pharmaceutical goods, serious consequences might follow due to deception and confusion in the minds of the general public”.

From these examples, it seems that the test that the courts have laid down does not seem to work for medicines:

“The question of infringement must be approached from the viewpoint of a common man with average intelligence, and imperfect memory, for whom the overall structure and phonetic similarity in the names is likely to deceive and cause confusion. The common man will not go for splitting the names and analyse their individual meaning before purchasing, but would rather depend upon his memory, or what he has learnt from someone about the product.”[17]

In the Indian context, is it sufficient to now use this simplistic test which perhaps works well for soap, toothpaste and perhaps even “over-the-counter” drugs for prescription drugs?

Since the origin of purchasing a medicine is often a doctor’s prescription, should not the test be whether a doctor will confuse the names of the brands and whether that confusion will hurt the patient? From the polls and cases it is clear that there is no risk to the patient if there is “confusion” so long as both brands are for the same drug[18]. It is to mitigate against the risk of patient harm that it is a mandatory requirement that doctors write the chemical name of the drug in the prescriptions. This will also ensure that there is very little chance of a mistake by the pharmacist dispensing the wrong drug or being confused by similar brand names.

Should the test for infringement be whether the brand names confuse both the pharmacist and the doctor resulting in the patient taking the wrong drug? That is only likely to happen if there are confusingly similar brand names for different drugs as was the case in Fortwin and Ostawin[19] or Terbinafine which is an antifungal compound and Terfenadine, an antihistamine drug. Another set of drugs which could lead to confusion is the brand, Olvance for the antihypertensive  drug, Olmesartan and Oleanz, a brand of the antipsychotic drug, Olanzapine. This is a dangerous situation that has existed in India for some time and needs to be addressed immediately.

One should ask if the issues set out above are unique to India. In the developed world, brand names are entirely disconnected with the chemical name. For example, the brand name for Molnupiravir is Lagevrio. Similarly for sildenafil citrate it is Viagra. That is the global standard recommended by the WHO and although India attempts to implement it in Section 13 of the Trade Marks Act, we have seen that in actual practice, thanks to the connivance of the Trade Marks Registry, the drug regulator and the courts, the confusion seems intentional, at the cost of patients.

Given that there is so much uncertainty in the law, it will be a challenge for the prosecution to be able to establish beyond reasonable doubt that the accused intended to infringe a registered trade mark of the complainant. Would not it be a defence for the accused that the drug regulator approved the label containing the brand name thereby confirming that it was not causing confusion for patients and the medical community[20]? Seizing the “infringing” drugs and all the equipment used to produce it may indeed cause a greater harm of denying patients access to the medicines they need. Finally, even if convicted, it is unlikely that the accused person will undergo any serious punishment – a small fine or a few months of imprisonment at worst. Perhaps all the stakeholders in the justice system have come to the conclusion that this is not just worth it. Is that the reason for the number of cases where imprisonment results for trade mark infringements in India?

How do we fix this problem that is entirely of our own making?

[4] See Trade Marks Act, proviso to S. 115: Provided that the police officer, before making any search and seizure, shall obtain the opinion of the Registrar on facts involved in the offence relating to trade mark and shall abide by the opinion so obtained.

[20] See, M.L. Khanna v. State of Uttarakhand, 2012 SCC OnLine Utt 2489 where the court missed an opportunity to answer this question. 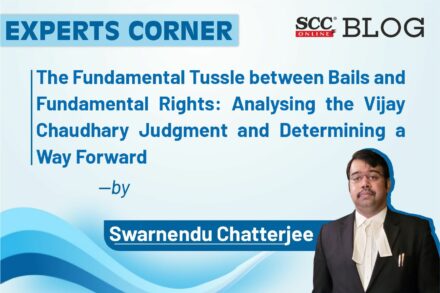 The Fundamental Tussle between Bails and Fundamental Rights: Analysing the Vijay Chaudhary Judgment and Determining a Way Forward 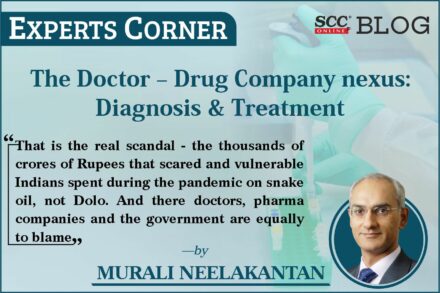