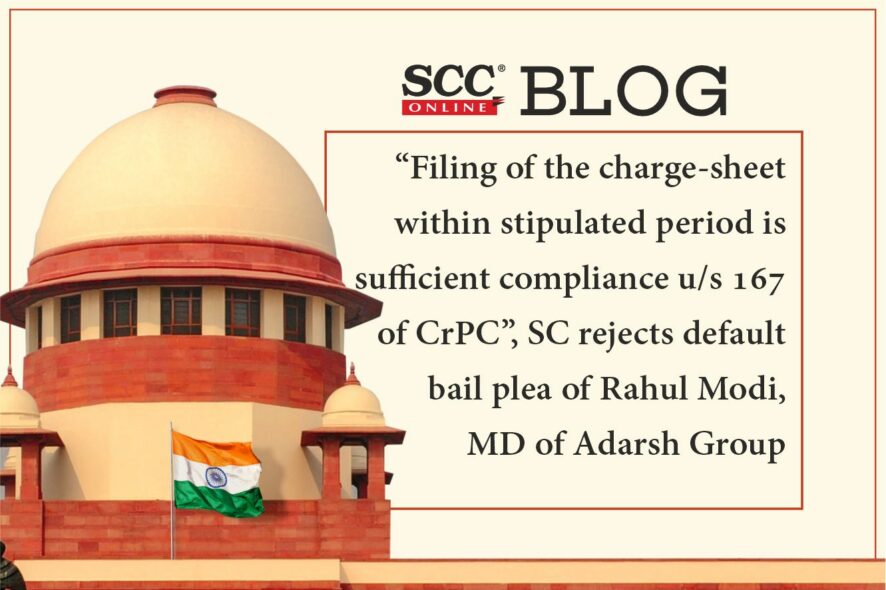 Supreme Court: In a loan default case, the Division Bench of L. Nageswara Rao* and B.R. Gavai, JJ., rejected pleas of Rahul Modi of Adarsh Group and Rahul Kothari of Rotomac Global for default bail on the ground that the Trial Court failed to take cognizance within stipulated 60/90 days time under CrPC. The Bench held that the provision is not for the trial courts and filing of the charge-sheet within the stipulated period is sufficient compliance under S. 167 of CrPC.

The Serious Fraud Investigation Office-appellant had assailed the order of the Punjab and Haryana High Court granting bail to Respondents 1 and 2. An investigation was directed to be conducted into the affairs of Adarsh Group of Companies and LLPs by the Central Government in exercise of the powers conferred under Section 212(1)(c) of the Companies Act, 2013 and subsections (2) and (3)(c)(i) of Section 43 of the Limited Liability Partnership Act, 2008 which led to the arrest of respondents 1 and 2.

Respondents 1 and 2 were remanded to 14 days’ judicial custody on 05-04-2019 which was extended to 16-05-2019 and further till 30-05-2019. Noticeably, the Sessions Judge had dismissed the respondents’ applications for statutory bail under Section 167(2) of the CrPC on the ground that the complaint under Section 439(2) of the Companies Act, 2013 was filed on 18.05.2019, i.e., before the expiry of the 60-day period prescribed in proviso (a) to Section 167(2) of the CrPC. However, the High Court considered the regular bail applications of the respondents and directed their release on the ground that they were entitled to statutory bail. The sole reason given for grant of bail by the High Court was that the Trial Court had not taken cognizance of the complaint before the expiry of the 60-day period, which entitled the respondents to statutory bail, as a matter of indefeasible right.

One Rahul Kothari had filed application for intervention for as his application for statutory bail was rejected by the Trial Court and upheld by the High Court. It was submitted by the intervener that his case (SLP (Cr) Diary No. 12089 of 2021) raised the same issue, i.e., the right of an accused to claim statutory bail in case cognizance is not taken before the expiry of the prescribed period of 60 or 90 days.

Claiming that there were conflict of opinion regarding the interpretation of Section 167(2), CrPC as the Supreme Court in Mohamed Iqbal Madar Sheikh v. State of Maharashtra, (1996) 1 SCC 722, and Sanjay Dutt v. State, (1994) 5 SCC 410, had taken a view that an accused can invoke his right for statutory bail if the court has not taken cognizance of the complaint before the expiry of the statutory period from the date of remand while a completely different view had been taken in Suresh Kumar Bhikamchand Jain v. Stateof Maharashtra, (2013) 3 SCC 77. Further, in different cases the similar issue had been referred to a larger Bench.

The Court made the following observations:

Hence, the Bench opined that the High Court had failed to consider the order passed by the Trial Court dismissing the applications seeking statutory bail.

Observing that the scheme of the provisions relating to remand of an accused first during the stage of investigation and thereafter, after cognizance is taken, indicates that the legislature intended investigation of certain crimes to be completed within the period prescribed therein, the Bench stated that once the chargesheet is filed within the stipulated period, the right of the accused to statutory bail come to an end and the accused would be entitled to pray for regular bail on merits.

Clarifying that the two stages are different, with one following the other so as to maintain continuity of the custody of the accused with a court, the Supreme Court in Bhikamchand Jain’s case had held that in the event of investigation not being completed by the investigating authorities within the prescribed period, the accused acquires an indefeasible right to be granted bail, if he offers to furnish bail and the court has no option but to release the accused on bail. However, on filing of the charge-sheet within the stipulated period, the accused continues to remain in the custody of the Magistrate till such time as cognizance is taken by the court, when the said court assumes custody of the accused for purposes of remand during the trial in terms of Section 309, CrPC.

On the issue as to whether the Court had taken a different view in the cases relied on by the intervenor, the Bench observed that in Sanjay Dutt (supra), the Court held that the custody of the accused after the challan has been filed is not governed by Section 167(2) but different provisions of the CrPC while in Madar Sheikh, it was held that the right conferred on an accused under Section 167(2) cannot be exercised after the charge-sheet has been submitted and cognizance has been taken.

Pertinently, filing of charge-sheet is sufficient compliance with the provisions of proviso (a) to Section 167(2), CrPC and that taking of cognizance is not material to Section 167.

The Bench noted that reference to a larger bench pertains to the issue of exclusion or inclusion of the date of remand for computation of the period prescribed under Section 167, therefore differentiating the same the Bench applied the law as laid down in Bhikamchand Jain’s case to hold that the conclusion of the High Court that the accused cannot be remanded beyond the period of 60 days under Section 167 and that further remand could only be at the post-cognizance stage, was not correct. Accordingly, the impugned order was set aside.

For the Intervenor: Mukul Rohatgi

J&K HC | What is the extent of interference that the Court can exercise under Art. 226 while adjudicating a contractual matter? HC answers