Rajasthan High Court: A Division Bench of Vinit Kumar Mathur and Sangeet Lodha, JJ., disposed of the petition and issued directions to the respondents to remove encroachments made over the land in question.

The instant petition was filed by the petitioners seeking directions to the respondents to remove encroachments made over the land comprising Khasra Nos. 70, 73, 90, 106, 107, 108, 108/1, 114, 115 & 128 in Village-Chandana, Tehsil Shivganj District Sirohi wherein it is set apart in the revenue record as ‘Gair Mumkin Rasta’, ‘Gair Mumkin Nadi’, ‘Gair Mumkin Gochar’ and ‘Gair Mumkin Abadi’.

The Court relied on Gulab Kothari v. State of Rajasthan, D.B.C. Writ Petition No.1554 of 2004 wherein it was observed that

The Court further relied on judgment Jagdish Prasad Meena v. State of Rajasthan, D. B. C. Writ Petition (PIL) No.10819 of 2018 wherein it was observed

“In order therefore to provide a pan-Rajasthan solution to this ever persisting problem, we deem it appropriate to direct the Chief Secretary of the State to devise a permanent mechanism, which should be operational in every District of the State where the concerned District Collector should be required to periodically notify for the information of the general public to lodge the complaints/representations with regard to such encroachments with a specially designated Public Land Protection Cell (for short ‘PLPC’) for rural areas. The PLPC should be head by District Collector and function under his direction and supervision. The PLPC shall get such complaints/representations enquired into by deputing concerned Sub Divisional Officer/Tehsildar/Naib Tehsildar so as to verity whether or not such encroachments have actually taken place on such land.

If the allegations are found to be substantiated, appropriate steps in accordance with law be immediately taken for removal of the encroachments and appropriate penal action be also taken against the trespassers. The complaints/representations received in the PLPC should be decided by passing speaking order, informing the respective complainant/representationist about the action taken. This would obviate the necessity of such complainants/representations approaching this Court directly by way of public interest litigation. If this practice is put in place, this Court would not be inclined to directly entertain such public interest litigation or would do so only in the event of inaction on the part of the concerned PLPC. The PLPC aforementioned shall also keep in view the guidelines issued by the Supreme Court in Jagpal Singh & Others vs. State of Punjab & Others, (2011) 11 SCC 396 wherein all the State Governments of the country were directed that they should prepare schemes for eviction of illegal/unauthorised occupants of the Gram Sabha/Gram Panchayat/Poramboke/ Shamlat land and the same must be restored to the Gram Sabha/Gram Panchayat for the common use of villagers of the village. The said scheme should provide for the speedy eviction of illegal occupants, after giving them a show cause notice and a brief hearing. It was further held therein that long duration of the illegal encroachment/occupation of land or huge expenditure in making construction thereon or political connections of trespassers are no justification for regularising such illegal occupation. Regularisation should be permitted only in exceptional cases where lease has been granted under some government notification .e.g. to landless labourers or members of Scheduled Castes/Scheduled Tribes or where there is already a school, hospital, dispensary, ‘shamshan’, ‘kabristan’ or other public utility of the like nature on the land. Observations of the Supreme Court in Jagpal Singh (supra) thus leave no manner of doubt that removal of encroachment on all such land is a rule and regularisation an exception and that too in extremely limited number of cases, which only the Government can do by appropriate notification of the government and no other authority.”

The Court held “In view of the directions already issued by this Court as aforesaid, no further directions are required to be issued in the instant case.”

A person discharging his functions must get his salary regularly 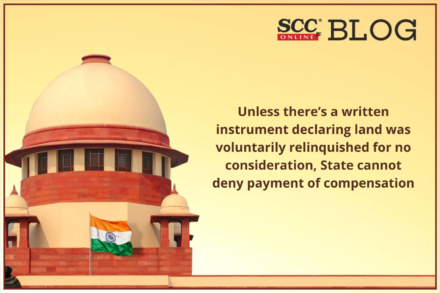