Saket Courts, New Delhi: Anuj Agrawal, Additional Sessions Judge, dismissed an appeal filed by the husband against the order of the trial court granting maintenance to the wife.

A complaint was filed under Section 12 of the Domestic Violence Act by the respondent/complaint stating that she was subjected to domestic violence by the husband as well as his other family members. Respondent added that she had been sustaining herself with great hardships and thus, she claimed monetary relief from the husband.

Trial Court had also granted maintenance. Appellants was aggrieved with the said order.

Serious disputed questions of fact (requiring evidence) cannot be gone into at the time of deciding an application for grant of interim maintenance and as the same can only be decided during course of trial after-parties lead their respective evidence.

Court stated that it will decide the legality of award of interim maintenance.

“…while fixing an interim maintenance, court has to take a prima facie view of the matter and need not to critically examine the respective claims of the parties regarding their respective incomes and assets because for deciding the same, the evidence would be required.”

Bench expressed that an aggrieved person cannot be rendered to lead a life of a destitute till the completion of the trial.

No income affidavit came to be filed by the appellant/husband before the trial court, therefore, trial court was left with no option but to make guesswork regarding the monthly income of the husband. Hence, Trial Court’s approach cannot be faulted.

Therefore, the interim maintenance to the respondent/wife has to be commensurate with the income of husband.

Appellant’s contention that no Domestic Incident Report was called by Trial Court is also without merit as it was evident from Trial Court record same was duly called from Protection Officer concerned.

A Magistrate, when petitioned under Section 12 (1) of the Act, is not obliged to call for a domestic incident report before issuing notice to respondent. 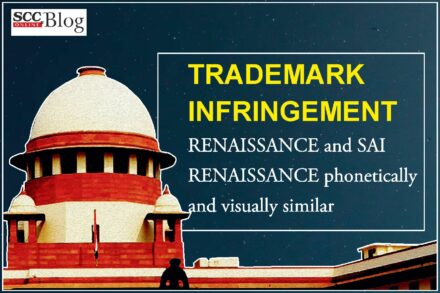 Trademark| RENAISSANCE and SAI RENAISSANCE phonetically and visually similar; Twin conditions must be fulfilled to get benefit of Section 30(1) of the Trademarks Act: SC