Bombay High Court: Pained to note the permitting of questions by the Lower Court which crossed all lines of dignity of a woman, Division Bench of Sadhana S. Jadhav and Sarang V. Kotwal, JJ., while denying reducing the sentence of the 3 accused who raped a woman, expressed regarding sentencing policy that,

“…object of sentencing policy should be to see that the crime does not go unpunished and the victim of crime as also the society has the satisfaction that justice has been done to it.”

“Sentencing Policy adopted by the Courts, in such cases, ought to have a stricter yardstick so as to act as a deterrent”

Prosecutrix was taken to various places and then to a secluded place where all 3 accused appellants committed rape on her one after the other and later she was left near her residence. In the meantime, police was informed by the relatives of prosecutrix’s who were searching for her.

FIR was lodged under various sections including Section 376(2)(g) of the Penal Code, 1860. All the accused were arrested and the Indica Car in which the prosecutrix was taken to various places was also seized.

What transpired the above-stated facts?

Prosecutrix while waiting for a bus to reach a destination was approached by a maroon coloured Indica car and the driver offered the prosecutrix to drop her. PW-1 was aware that some vehicles operating for the Call Centers were used to take other passengers and under the said impression in light of getting late she decided to go in that car.

On the way accused 1 told the prosecutrix that there would be 8-10 more people who would commit rape on her. The accused even bought beer and some food and consumed the same.

Further, accused 1 asked PW-1 to make a call to her mother and inform her that she would be late so that nobody starts searching for her. After that, she was taken to a secluded place where she was raped by one after the other and dropped around 12.45 near her residence. On reaching her place she immediately called her mother and after that, her aunt and two friends came to her flat and then the police also arrived.

She was taken to a hospital for medical examination, and she even identified all the accused in the Court.

Bench noted that defence tried to develop a theory of consensual sex and kept giving certain suggestions which this Court disapproved of.

Court stated that it was pained because of the passive approach adopted by the Judged in allowing such questions. The said questions crossed all lines of basic dignity.

“Under the garb of giving suggestions. Graphic details of the act were put to the witness.”

Under Section 152 of the Indian Evidence Act, the Court was duty-bound to forbid any question which appeared to be intended to insult or annoy or which though proper in itself appeared to the Court needlessly offensive in form. Section 151 of the Indian Evidence Act also empowers the Court to forbid any questions or inquiries which it regards as indecent or scandalous, although such questions or inquiries may have some bearing on the questions before the Court, unless they relate to facts in issue, or to matters necessary to be known in order to determine whether or not the facts in issue existed.

Noting the above, lower Court Judge failed in his duty in not protecting the dignity of PW-1 and not exercising his powers under Sections 151 and 152 of the Indian Evidence Act.

High Court added that it is necessary to remind trial Courts that under Section 148 of the Indian Evidence Act, it is their duty to decide when the witness shall be compelled to answer.

PW-1 had denied the theory of consensual sex and, therefore, all further suggestions in respect of the actual act of intercourse were totally unnecessary.

“Not happy with the silence kept by the Special Public Prosecutor by not objecting to the suggestions.”

“Prosecutors cannot only concentrate on securing conviction, but the conduct of the proper trial is also their duty.”

Bench held that the circumstances of the case sufficiently prove the guilt of the accused.

Medical evidence had also shown that PW-1 was subjected to forceful sexual intercourse.

Prosecution had established its case against all the accused beyond all reasonable doubt.

While concluding, Court stated that in the present matter, PW-1 innocently took the lift from accused 1. Accused 1 & 2 and accused 3 who joined them subsequently, took advantage of her helpless condition. They committed rape on her. She was threatened. PW-1 has suffered extreme trauma.

Tri HC | No mechanism available to determine as to how and whether the biometric impression was genuine or not; Court suggests assistance of forensics 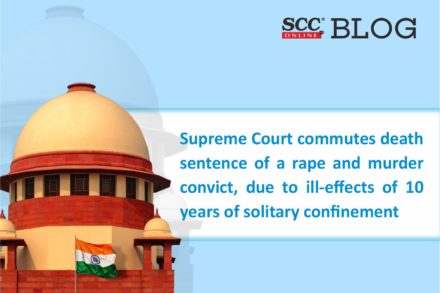 Supreme Court commutes death sentence of a rape and murder convict, due to ill-effects of 10 years of solitary confinement

Reported By Editor Published on November 11, 2022