Supreme Court: The 3-judge bench of Dr. DY Chandrachud, L. Nageswara Rao and S. Ravindra Bhat, JJ has, in a bid to understand the vaccination policy for COVID-19, has sought clarification from the Central Government on various aspects enumerated below. While doing so, the Court clarified that,

“This Court is presently assuming a dialogic jurisdiction where various stakeholders are provided a forum to raise constitutional grievances with respect to the management of the pandemic. Hence, this Court would, under the auspices of an open court judicial process, conduct deliberations with the executive where justifications for existing policies would be elicited and evaluated to assess whether they survive constitutional scrutiny.”

Vaccine Procurement and Distribution among Different Categories of the Population

Asking UoI to undertake a fresh review of its vaccination policy, the Court has sought clarification on the following:

“… we are not opposed to the involvement of private hospitals in the vaccination drive. Private health care institutions have an important role as well. The UoI has correctly noted in its affidavit that these hospitals will reduce the burden on government facilities. This was also happening earlier for the vaccination of those above 45 years of age, where the Central Government was providing these hospitals with vaccines and they were allowed to charge patients a nominal fee (Rs 250). However, the issue is about the effect of privatizing 50% of all vaccines available for the 18-44 age group.”

Basis and Impact of Differential Pricing

“If the Central Government’s unique monopolistic buyer position is the only reason for it receiving vaccines at a much lower rate from manufacturers, it is important for us to examine the rationality of the existing Liberalized Vaccination Policy against Article 14 of the Constitution, since it could place severe burdens, particularly on States/UTs suffering from financial distress.”

While the Court commended the co-operative efforts of the UoI and the private manufacturers in developing and distributing vaccines which are critical to mitigate the pandemic, it sought clarifications on the process of development and augmentation of vaccine production and its pricing for States/UTs and private hospitals.

“… there exists a digital divide in India, particularly between the rural and urban areas. The extent of the advances made in improving digital literacy and digital access falls short of penetrating the majority of the population in the country. Serious issues of the availability of bandwidth and connectivity pose further challenges to digital penetration. A vaccination policy exclusively relying on a digital portal for vaccinating a significant population of this country between the ages of 18-44 years would be unable to meet its target of universal immunization owing to such a digital divide. It is the marginalized sections of the society who would bear the brunt of this accessibility barrier. This could have serious implications on the fundamental right to equality and the right to health of persons within the above age group.”

The Court directed UoI to file an affidavit, with each of the abovementioned issues responded to individually and no issue missed out.

The affidavit should also provide the following information:

The affidavit is to be filed within 2 weeks.

Appearances before the Court 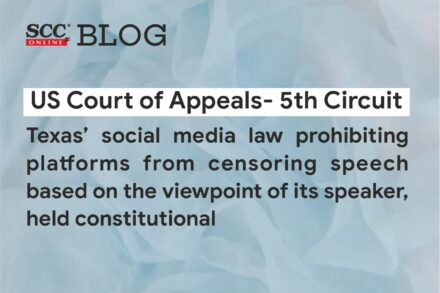 US Court of Appeals- 5th Circuit | Texas' social media law prohibiting platforms from censoring speech based on the viewpoint of its speaker, held constitutional

Conspiracy and abetment of corruption; SC holds section 13 of Prevention of Corruption Act cannot be invoked against non-public servant