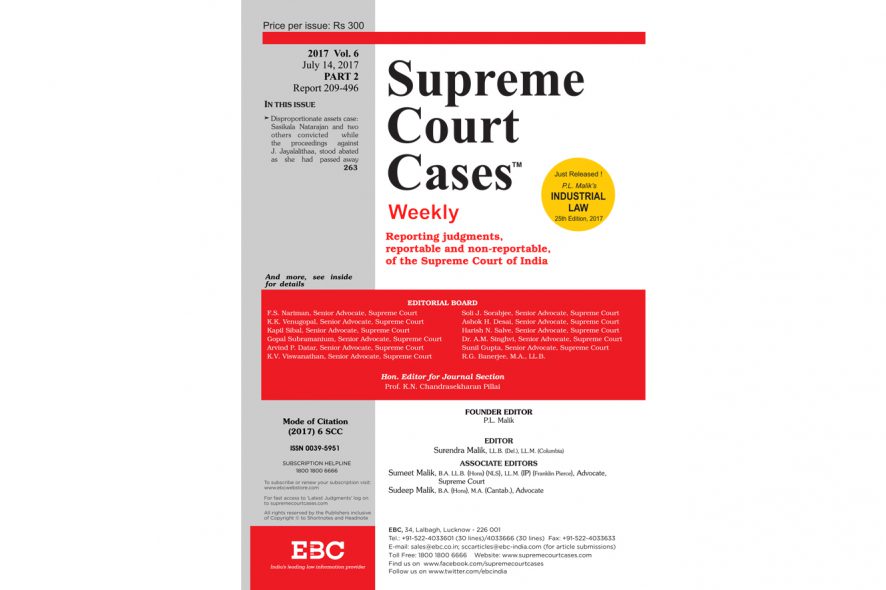 In this part, read the important judgment on right to life and liberty, deftly analysed by our editors in over 7 shortnotes, where the Supreme Court has held that custodial violence involving police atrocities which resulted in passing away of the deceased is a crime against humanity and a clear violation of rights guaranteed  under Article 21. It is held that permission for compounding such offence cannot be granted by the court, regardless of any settlement entered into by the parties.  [Pravat Chandra Mohanty v. State of Odisha, (2021) 3 SCC 529]

Constitution of India — Art. 21 — Offences involving police brutality/atrocities and which are compoundable with permission of court: Permission for compounding of such offences involving police brutality/atrocities cannot to be granted by court. When the police is a violator of the law whose primary responsibility is to protect the law, the punishment for such violation has to be proportionately stringent so as to have effective deterrent effect and instil confidence in the society. Offences involving police brutality are crimes not against the victim alone but against humanity and a clear violation of rights guaranteed under Art. 21. Thus, permission for compounding of such offences cannot be granted by court, regardless of any settlement entered into by the parties. [Pravat Chandra Mohanty v. State of Odisha, (2021) 3 SCC 529]

Recovery of Debts and Bankruptcy Act, 1993 — S. 21 and proviso thereto — Condition of pre-deposit under S. 21 — Mandatory nature of: Discretion of DRAT to reduce pre-deposit amount from 50% of debt due, held, is limited to reducing the pre-deposit to 25% thereof. The pre-deposit cannot under any circumstances be reduced below 25% of the debt due. [Kotak Mahindra Bank (P) Ltd. v. Ambuj A. Kasliwal, (2021) 3 SCC 549]

Civil Procedure Code, 1908 — S. 89: True intendment of S. 89 is legally arrived at settlement of disputes outside court without intervention of courts, and not necessarily by only the modes prescribed in S. 89, nor necessarily upon direction of court. Settlement of disputes outside court and refund of court fees is permissible even in cases in which parties, without any reference by court, privately agree to settle their dispute outside modes contemplated under S. 89 CPC and such settlement is legally arrived at. [High Court of Madras v. M.C. Subramaniam, (2021) 3 SCC 560]

Constitution of India — Sch. VII List I Entry 23 and List II Entry 13 and Arts. 246, 73, 257 and Pt. XI Ch. II (Arts. 256 to 263) — Legislative and Executive power of Union under List I Entry 23 i.e. in respect of highways designated as national highways: Provisions of the Constitution unambiguously indicate that legislative as well as executive power regarding all matters concerning and connected with highways designated as national highways, vest exclusively in Union and are governed by laws made by Parliament alone in that regard. For the same reason, complete executive power in respect of highways designated as national highways also vests with Union, including the power to acquire land therefor and construct and develop the same. Further, Chapter II of Part XI of the Constitution dealing with administrative relations between Union and States makes it amply clear that executive power of every State shall be so exercised as to ensure compliance with laws made by Parliament and any existing laws which apply in that State, and executive power of Union shall extend to giving of such directions to a State as may appear to Government of India to be necessary for that purpose. Hence, Union also has the power to issue directions to State Government concerned for the development of national highways, in accordance with the National Highways Act, 1956. [Project Implementation Unit v. P.V. Krishnamoorthy, (2021) 3 SCC 572]