Jammu and Kashmir High Court: Sanjeev Kumar, J. heard the instant petition against the impugned order passed by District Magistrate (the detaining authority), by which the petitioner had been detained in preventive detention to preventing him from indulging in the activities which were prejudicial to the security of Union Territory. The Bench expressed,

The impugned order had been passed by the detaining authority on the basis of material supplied by the SSP. As per the dossier supplied by the police, the petitioner had connections with one foreign militant namely Maz Bahi and was providing assistance to the militants of banned outfit Hizbul Mujahideen. It had been alleged that the petitioner was instrumental in strengthening militancy network in the area of Rafiabad. For which he had been apprehended in connection with case FIR No.161 of 2019 under Sections 18, 39 of ULA(P) Act and 7/25 Arms Act which is still under investigation.

The detaining authority, on the basis of dossier of activities arrived at satisfaction that the petitioner though under judicial remand, was every likely to indulge in subversive activities if he is admitted to bail, therefore, it was imperative to put him under preventive detention.

The petitioner has assailed the impugned order of detention, inter alia, on the following grounds:

The Bench observed that the petitioner had been detained under preventive detention for his alleged involvement in subversive activities which led to the registration of FIR No.161 of 2019 under Sections 18, 39 of ULA(P) Act and 7/25 Arms Act. In the aforesaid FIR, the petitioner was released on bail by on 06-02-2020, whereas Superintendent of Police, who forwarded the relevant record including dossier and other connected documents to the detaining authority, did not bring the factum of petitioner having been released on bail to the notice of detaining authority. It was because of this omission on the part of Senior Superintendent of Police, the detaining authority had categorically stated in the grounds of the detention that the detenue was under judicial remand and that there was every likelihood of his being admitted to bail. The detaining authority had also noted that there was well-founded apprehension based on report received from field information that the petitioner, if released on bail, would again indulge in subversive activities.

“At the time of passing of the detention order, the detaining authority was not aware whether the detenue was in police/judicial custody or he stood released on bail. It cannot be denied that it was a relevant information that was required to be produced before the detaining authority to enable it to derive subjective satisfaction with regard to necessity of placing the petitioner under preventive detention.”

Hence, the non-application of mind by the detaining authority was fatal and affected the root of the detention and, therefore, the Bench held that the impugned order of detention was worthy of being quashed. Accordingly, direction were issued to the respondents to release the detenue from the preventive custody.

For the Petitioner: Adv. Wajid Haseeb 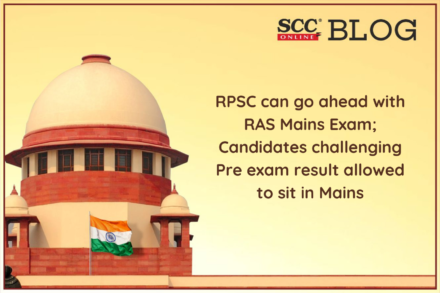 SC allows RPSC to go ahead with RAS Mains Exam; Candidates challenging Pre exam result allowed to sit in Mains. Here’s how their result to be declared

AFT | Punishment of “Severe Reprimand” after summary trial not a “service matter”; Tribunal has no jurisdiction to deal with such issues

Questions of faith have no bearing on individuals’ freedom to choose a life partner; Delhi High Court rejects bail for mother and grandmother