While the role of patents in extending monopolies over pharmaceutical products is now widely debated, there is relatively little discussion on the role that trademarks, packaging and visual impressions can play in extending such monopolies. As advertisers are well aware, recall value plays a large role in brand/product recollection and customer loyalty. However, when it comes to pharmaceutical products, this recollection often equates to patient compliance, as patients find it easier to take (for example) the same coloured, same shaped pills as part of a routine. No doubt, this helps ensure that patients take their prescribed medicines as required, but what happens when generic versions of these drugs come out? Generic equivalents of patented products often come out at much cheaper prices after the 20 years of patent protection. However, the strong recall value attached to a product’s visual impression (packaging, distinctive colouration, etc) could mean that a de-facto monopoly is extended indefinitely, for as long as a company has any legal entitlements over that visual impression, such as trademarks, which can be indefinitely renewed.[1]

There is also an inherent ‘stickiness’, especially for emergency use products, such as inhalers, as patients are unlikely to easily change to a competing brand when they have gotten used to reaching out for a purple inhaler for years. Would the parent of an asthmatic child dare to risk any confusion when they rush to urgently find and administer an inhaler in case of a sudden asthma attack? Very unlikely. This is also true for older patients, busy individuals, those who cannot see well, and those who may not read English well. If there is a monopoly over the colour, there is now a good chance that such patients will not accept the risk that they have to remember the colour of the inhaler they should be using if it is different from the one they were using last month.

A 2019[2] case by the European Court of Justice brought this issue to the forefront when it dismissed GlaxoSmithKline’s claims that Sandoz was confusing consumers by using the same purple colour that Glaxo was using, on their inhaler products. Glaxo had launched a Dry Powder Inhaler (Seretide Accuhaler) in 1999, and a Metered Dose Inhaler (Seretide Evohaler) in 2000, both coming in multiple dosage units, and in a purple and white form. When Sandoz brought in its generic version (AirFluSal Forspiro), it did so in a fixed dosage, and in a proprietary inhaler but one which also came in a purple and white form. Glaxo, having had their trademark for the colour purple on their inhalers revoked earlier (the revocation of which was upheld later again in 2020[3]), tried and failed to convince the court that the similar colour scheme would confuse consumers. And Sandoz, pointing out that several other inhalers containing the same active ingredients were also sold in purple, was able to successfully convince the court that different colours signified inhalers containing different types of medications.

The Role of Trademarks in Public Health Concerns

While trademarks are generally understood as consumer protection mechanisms, for consumers to be clear about the origins of the goods they’re buying, there are certain fundamental differences to be kept in mind when looking at how trademarks function for pharmaceutical goods. First off, unlike regular consumer products, medical intermediaries such as doctors, pharmacists, drug regulators and insurance agencies are largely responsible for the selection of the drug, as opposed to the end user. This means that trademarks and visual impressions of the product packaging play a much more limited role in the decision to purchase pharma products than they do in regular consumer goods. As noted earlier though, they do play a large role in the proper and timely consumption of medicines. For products such as inhalers, the visual impression of the product itself, over and above the packaging, may play this role, since the product is what people reach out for in their time of need. Similarly, products such as pills should have their trademark and trade-dress protections limited to the packaging of the product, as opposed to the shape or colour of the pill itself. The right to exclude other brands from the market over the same shape or colour otherwise produces an anti-competitive effect, not to mention that shapes of pills (oval, round, and similar variations) are mostly functional so that patients are able to swallow the pill. As shown by this 2012 study[4] (Kesselheim et al) that examined the influence of pill appearance on patient behaviour showed that, ‘patients who experience changes in pill color in particular have an increased risk of interruptions in medication use.’

We would argue here that even if a peculiar shape does become distinctive (as required in trademark law), then the public health interest in ensuring patients are aware of generic equivalents by allowing competitors to copy that shape, outweighs the ill-suited trademark justification for monopoly rights over said shape.

In fact, in the above case too, Glaxo’s Accuhalers containing different API were differentiated on the basis of different colour combinations – purple for the above APIs, blue for Salbutamol, green for Serevent, Orange for Flixotide. Such differentiation enables patients to distinguish “their” medicines/ paraphernalia from others used for different purposes, without having to be sure about long and complicated medicinal product names.

The lack of adequate regulation around trademarks and trade names for drugs has already been known to cause very dangerous confusions. For example, ‘Olvance’ is a brand name for an antihypertensive drug, Olmesartan. ‘Oleanz’ is a brand of an antipsychotic drug, Olanzapine. Both have been approved by the drug regulator and have been known to cause confusion. Despite several courts highlighting this type of confusion (see Cadila v Cadila[5] paras 22-27), nothing has been done to improve the situation.

Dr Scaria and Kavya Mammen in their 2017 paper[6] also point to the dangers around the perceptions of low quality’ that is sometimes associated with generics, arguing that ‘monopoly rights over physical attributes of branded drugs may perpetuate the myth of “low quality” generics”.’ Concerns regarding quality of drugs, after all, are to be handled by the drug regulator, regardless of branded or non-branded version.

If we accept that consumer protection in the case of pharmaceutical products requires a different understanding of the role of packaging and visual impressions as compared to standard consumer goods, then it becomes clear that ‘origin of the product’ is no longer the most important factor to be communicated. Rather, it is more important to ensure that regardless of manufacturer, patients are clear on what medicines they are consuming. In Cipla v. MK Pharmaceuticals (2007)[7], the Delhi High Court expounded upon this, stating that there cannot be monopoly over colour and shape. The court was on the right track with this statement, but then got distracted by quality and nature of the medicines, which have nothing to do with the Trade Marks Act. The court there would have been right to affirm that the trademark is no more than an indication of the source of goods. The ‘no monopoly over shape and colour’ point seems to have been ignored though, in Pfizer v Mittal Nathalal Patel (2014)[8], where the Delhi High Court thought of the shape and colour of Pfizer’s “little blue pill” as a ‘trade dress’ even though consumers don’t actually see the pills when they are sold/purchased. The lack of clarity on this point is something which needs to be addressed in future orders.

As long as drug regulators are doing their jobs, branded versions of drugs are perfectly substitutable with their generic equivalents – and given competition concerns, it is important to ensure that artificial barriers such as monopolies over product recallability (through packaging, visual impression, etc) do not come in the way of allowing this substitutability. In 2015, the US FDA published a (non-binding) guidance[9] document for industry, where they stressed that they were “concerned that differences in physical characteristics (e.g., size and shape of the tablet or capsule) may affect patient compliance and acceptability of medication regimens or could lead to medication errors.”

In a previous effort to ensure that patients were made aware of generic substitutability of drugs, the Indian government mandated that doctors[10] were to only prescribe medicines by their non-proprietary names. Given the vast divides in the country (linguistic, urban, rural, etc), this uniformity in writing prescriptions would also ensure minimal mistakes or accidental negligence on part of the doctor or pharmacists in handing out the medicine. However, this has had limited success as there is no real way of enforcing this and doctors opposed this idea, asking the government to regulate the prices of the drugs instead of putting a leash on the doctor’s right to prescribe a medicine. In addition, even if used, non-proprietary names are still often long and complicated, thus reducing their utility so far as the common man is concerned.

In fact, the reason that cigarette packages now have large warning signs and plain-packaging with minimal trademark usage, also stems from a re-wired understanding of the role of visual impressions of products, in the context of public health. That was a measure to prevent public health harms. Perhaps it is also time to explore measures which could increase public health gains, such as whether ‘colour coding’ of equivalent pharmaceutical products would help with more patient compliance.

Such a move also fits in well in the context of considering the global south wherein a large part of the population is unable to read or write their own names, let alone read complicated names of pharmaceutical products. The Indian Supreme Court noted this socio economic reality in Cadila Healthcare Ltd. v. Cadila Pharmaceuticals Ltd[11]. in the following words-

“ In a country like India where there is no single common language, a large percentage of population is illiterate and a small fraction of people know English, then to apply the principles of English law regarding dissimilarity of the marks or the customer knowing about the distinguishing characteristics of the plaintiffs goods seems to over look the ground realities in India. While examining such cases in India, what has to be kept in mind is the purchaser of such goods in India who may have absolutely no knowledge of English language or of the language in which the trade mark is written and to whom different words with slight difference in spellings may sound phonetically the same.”

Perhaps, it is time to try new policy suggestions, like uniform colour schemes for similar drugs, which will not only assist patients in being aware about the medicines they are taking but also will help the pharmacists in differentiating between phonetically and visually similar drugs. Or perhaps in the context of branded names having more ‘stickiness’ quotient with medical intermediaries, another more radical suggestion could be requiring that ‘branded’ names, which gain from the initial years of market exclusivity, are converted into generic names after the expiry of the patent! Regardless of what suggestions are finally taken on board, it is imperative the larger public interest reframes these traditional understandings of norms around product design and packaging, so that social welfare maximising alternatives can be rolled out.

†† Swaraj Paul Barooah is currently the Managing Editor of SpicyIP.com. He has formerly been Policy Director at the Centre for Internet and Society, India, and Exec Vice President at IDIA Charitable Trust.

*The article has been republished with due permission of SPICY IP. Click HERE for original publication. 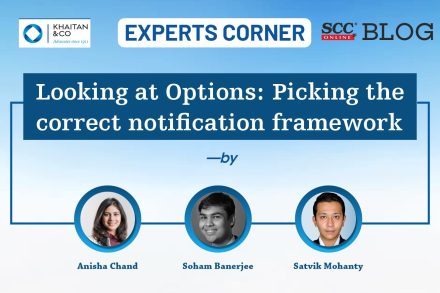 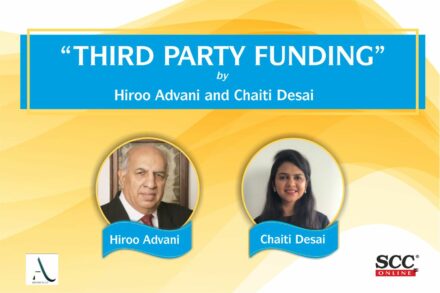 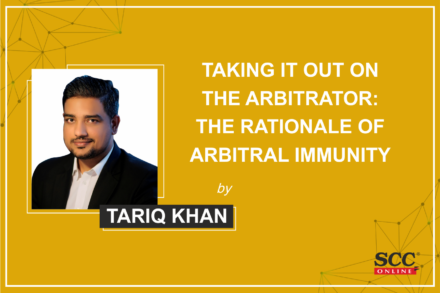 Taking it out on the Arbitrator: The Rationale of Arbitral Immunity