Bombay High Court: G.S. Patel, J., disposed of an interim application with respect to the suit for trade mark and copyright infringement, while holding that ‘Copyright registration is not mandatory under the Copyright Act, 1957.”

Trade Mark in question is a label mark, not  a word or a device mark.

Plaintiff claimed copyright in the artistic work comprised in the label. 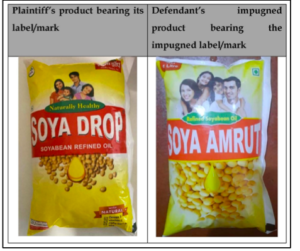 It has been stated that Narayani Trading’s Label uses very nearly – or indistinguishably the same – principal background colour.

Counsel Mr Burad for Narayani Trading submitted that the two labels are entirely distinct and no one will mistake one for another. Court rejected the same and elaborated that the key features, integers, or elements that have been described by the Bench in Sanjay Soya’s Label all find place in Narayani’s Trading Label with only minor variations.

Sanjay Soya has been manufacturing and selling edible oils of various kinds, including soyabean oil, for many years. Narayani Trading is a sole proprietorship. Sanjay Soya claimed to have the necessary ISO certifications for quality and other certifications. Sanjay Soya stated that it is the successor-in-title of one SK Oil Industries, in May 2003 SK Oil adopted the label, mark and artistic work in relation to edible oil which has distinctive get up, layout and schematic arrangements.

Recital (2) of the Deed of Assignment stated that SK Oil conceived, created, designed and developed a SOYA DROP label and that is the artwork that is the issue of concern in the present matter.

Counsel Mr Khandekar for Sanjay Soya submitted that the label is an original artistic work within the meaning of Section 2(c) of the Copyright Act. Further, it was added that, Sanjay Soya has used the mark, with some variants, openly and continuously since adoption.

Narayani Trading’s adoption of the label mark is dishonest, not bona fide, with an ulterior motive and intended to trade upon and encash the goodwill, recognition and reputation of Sanjay Soya’s business.

The Court noted that earlier decision of the Court in Dhiraj Dharamdas Dewani v. Sonal Info Systems (P) Ltd., 2012 (3) Mh LJ 888 held that registration under the Copyright Act is mandatory before a plaintiff can claim relief. So also, the decision in Gulfam Exports v. Sayed Hamid, 2000 (20) PTC 496 Bom says that registration is required. Noting the settled law, the present Bench held that these two decisions are per incuriam on the question of compulsory registration under the Copyright Act.

High Court observed that Copyright and Trade Mark operate in different spheres, though in some cases – as in the present one – these may overlap or intersect.

Section 51 of the Copyright Act does not per se, demand prior registration. The said provision is to be read with Section 45(1) which states that the owner of copyright may apply for registration.

Importantly, copyright infringement lies in the unlicensed use of original works, in which the author has a spectrum of exclusive rights.

There is always the slight escape of the fair use doctrine, but the underlying principle is that no author may claim as his or her own the original authorship work of another. That is the essence of copyright protection.

Registered proprietor of a mark or the owner (not registrant) of copyright may have recourse to the jurisdictional venues in Section 134 or Section 62, in addition to those under CPC Section 20.

The owner of a copyright has a panoply of jurisdictional choices, including one that is available only to him (and not to an ordinary plaintiff in a regular civil suit).

Rationale behind allowing a trade mark registrant or a copyright owner additional jurisdictional choice is that the right claimed is in rem, against the world at large. The infringement thus takes place where the proprietor of the trade mark or the owner of copyright resides or works. This is, therefore, no ground to hold that copyright registration is mandatory.

There is no law or precedent that requires that a declaration that a decision is rendered per incuriam be made only by a hierarchically superior court.

Bench held that knowing of Sanjay Soya’ s presence in the market, of its label and of its artistic work, Narayani Trading illicitly and without bona fide intent adopted a label that is confusingly, deceptively and strikingly similar to that of Sanjay Soya; and in doing so, copied substantially, if not wholly, the artistic work comprised in Sanjay Soya’s trade dress and packaging, and of which copyright Sanjay Soya through its predecessor-in-title is indeed the owner.

Cause of Action in ‘Passing Off’ || Classic Trinity

Classic Trinity places on a plaintiff the burden of proving goodwill in its goods or services, trade dress, brand mark or even the thing itself.

In view of the above, Bench stated that Sanjay Soya prima facie did prove the above.

Further, the plaintiff needs to show the false representation to the public that leads it to believe that the goods or services of the defendant are those of the plaintiff. Fraud is not necessary.

The above, was also achieved by Sanjay Soya.

“Test of deception or its likelihood is that of the common person.”

A plaintiff need not prove actual or special damage; a reasonably foreseeable probability is sufficient.

“…in the case of beauty, similarity and its extent are matters that lie in the eyes of the beholder, and in all intellectual property matters, the beholder is, perhaps unfortunately, in the first instance always the judge tasked with deciding the dispute.”

Lastly, while concluding the matter, Bench expressed that looking at the two packets of which the images have been rendered at the start, all that the Court can say is “which is whose? I cannot tell.”

For the Plaintiff: Mr Rashmin Khandekar, with Ms Janhvi Chadha and Mr Hardik Sampat, i/ b Krishna and Saurasri Associates LLP.

P&H HC | Challan filled without FSL report is not a complete challan under NDPS Act; HC grants bail to the man in alleged possession of 1.6 kg ganja

J&K HC | HC does not sit in appeal over decision of detaining authority and cannot substitute its own opinion, when grounds of detention are precise & relevant