Delhi High Court: V. Kameswar Rao, J., while addressing an issue wherein a doctor sought for a study leave for pursuing MD/MS Course, stressed upon the ambit of the power of judicial review.

Petitioner sought a direction against respondents 1 and 2 to issue the relieving order and grant study leave to him in order to enable him to pursue MD/MS Course in Pediatrics from Post Graduate Institute of Medical Education and Research, Chandigarh (PGI) as petitioner satisfied the criteria laid down for grant of study leave in the Office Memorandum dated 02-11-2012.

The request for study leave was denied in view of the prevailing situation i.e., COVID-19.

Further, it was added that the Lt. Governor took a considered view that in these times of Pandemic COVID-19, more medical staff was required. Since some of the doctors had already proceeded on study leave, it would not be prudent to spare more Doctors. Hence the LG desired that the department may kindly be advised to not sanction any more study leave application.

The decision in regard to study leave came under the decision-making power of the Lt. Governor, Govt. of NCT of Delhi based on the prevailing COVID-19 situation in the city and in the instant case, the said request of the petitioner was not acceded to.

Court stated that the Court, in exercise of its power of judicial review, cannot sit as an Appellate Authority over the decision taken by the administration/management.

Further, the Bench expressed that the decision was taken giving due regard to the exigencies, which may arise in the course of administration.

“…petitioner being a meritorious candidate, has a legitimate expectation to acquire a higher qualification and advance in his career but at the same time, as an employee working in the Govt. of NCT of Delhi, is bound by the Rules framed by the Government i.e. Rule 50 of the Leave Rules clearly stipulates that the grant of study leave is not a matter of right, as the same shall be granted to the government servant with due regard to the exigencies of public service.”

Hence, it was held that in view of the Supreme Court decision in State of Punjab v. Dr Sanjay Kumar Bansal, (2009) 15 SCC 168,  when the decision has been taken at the highest level in the Government, this Court cannot sit as an Appellate Authority over such a decision. [Dr Rohit Kumar v. Lt. Governor of Delhi,  2021 SCC OnLine Del 317, decided on 02-02-2021] 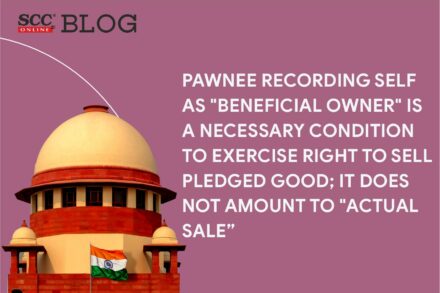 Pawnee recording self as “beneficial owner” is a necessary condition to exercise right to sell pledged good; it does not amount to “actual sale”: SC

Reported By Saba Published on December 16, 2017

Mere facility of food and refreshment in a Non-residential Club will not make it fall within the purview of M.P. Shops and Establishments Act: Supreme Court