The facts of the case are that the respondent –workman was appointed by the petitioner management i.e Food Corporation of India on the post of Hindi Typist in on casual basis without any appointment letter being issued to him or being appointed against any sanctioned post. On 06.05.1984, the casual service of the workman was terminated which was challenged by him before the Central Government Industrial Tribunal No. 1 at Dhanbad which held that the workman completed 240 days of service and since he had not been paid retrenchment compensation, so his termination of service was wrong and he must be reinstated with full back wages and also entitled for pay protection vide award dated 08.08.1990. Later, the Management on 03.02.1995, issued Circular inviting applications from internal candidates fulfilling eligibility criteria for filling up the post of Hindi Typist, the workman/respondent did not apply for the same and chose to raise industrial dispute claiming regularization of service under Section 10 of the Industrial Dispute Act which was decided in favour of the workman Being aggrieved by the same, the Management has preferred instant writ petition.

Counsel for the petitioners submitted that the concerned workman has not been able to bring on record the appointment letter nor did he possess the requisite qualification and has never appeared in any selection process held by the Management and did not fulfil the conditions and criteria as laid down in FCI Staff Regulation of 1971. Hence, the direction to regularize the workman in service is totally contrary to law making the award unsustainable and the same is fit to be set aside.

Counsel for the respondents submitted that the writ petition is not maintainable and is fit to be dismissed. He further submitted that the respondent-workman was appointed on 04-12-1982 and since then he is in continuous service without any break and that there is no difference between the work of a casual Hindi Typist or the permanent Hindi Typist and the workman is performing the same, similar and identical duties to that of a regular Hindi Typist and the long continuous service of more than 25 years itself is sufficient to prove eligibility of the workman. It was further argued that in spite of having sanctioned vacant post, the concerned workman has not been regularized arbitrarily in order to deny him regular pay scale as also to deny the benefits of regular services and accordingly, the Award has rightly been passed holding the workman entitled to be regularized as a Hindi Typist with full wages.

“61. In settling the disputes between the employers and the workmen, the function of the tribunal is not confined to administration of justice in accordance with law. it can confer rights and privileges on either party which it considers reasonable and proper, though they may not be within the terms of any existing agreement. It has not merely to interpret or give effect to the contractual rights and obligations of the parties. It can create new rights and obligations between them which it considers essential for keeping industrial peace.”

The Court held that even though the workman was reinstated but instead of regular Typist, he was allowed to join as a casual typist in the year 1991. From the evidences brought on record, it appears that there were regular appointments of regular typist by the Management but the concerned workman was neither informed nor any opportunity was given to confirm his as a regular typist. Even after his reinstatement, the Management made regular appointments in the years 1994, 1995 and 1996 but nothing has been brought on record to show that the concerned workman was ever informed or given any opportunity to participate for appointment as a regular typist. The nature of work of casual typist and the regular typist are the same and similar. The workman concerned has been discriminated as he was getting salary of Rs 1,400 though, on salary hike, he was getting a sum of Rs 1,890 per month but the regular typist who was appointed in the year 1984, was getting a monthly salary of Rs 8,000, besides the other benefits of Earned Leave, Commuted Leave, etc.

NCLAT | Can a Resolution Professional “freeze” the Bank Accounts of Corporate Debtor? 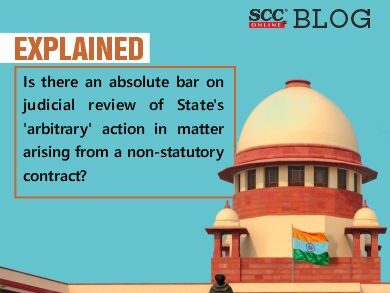 Ker HC | In divorce petition under S. 13(1)(iii) of HMA, can Court order a party to appear before medical board for assessment of mental condition? Court discusses