Facebook is investing $5.7 billion or INR 43,574 crore to get close to 10% equity in Jio Platforms Limited.  In its press release[1], the social media giant expressed its intention to connect Jio’s e-commerce platform, JioMart, to small businesses and shops via “the power of WhatsApp” in order to make online shopping a seamless mobile experience. The Jio-Facebook deal announced last week promises to push India’s digital transformation to new heights. However, out of a number of regulatory approvals, Competition Commission of India’s (CCI) approval is the most crucial one. To consummate a deal that crosses the thresholds mentioned under Section 5 of the Competition Act, 2002, CCI’s approval is mandatory. Section 6 sub-section (2) read with Regulation 5 of the Combination Regulations[2] evidences a suspensory regime i.e. the approval must be obtained prior to closing of the deal in the country.

The deal, as ambitious as it sounds, can run into anti-trust issues. Firstly, the multi-billion-dollar investment into Jio will have to be notified to and approved by India’s competition regulator. For that to happen, CCI will have to take a forward-looking approach and check that the proposed combination does not have potential to cause appreciable adverse effect on the competition in the market. To safeguard the investment from the protectionist approaches of Indian regulators is a crucial factor in consummating the deal and, subsequently, carrying it forward smoothly. Despite the criticism to protectionist regulatory regime, CCI tends to adopt a liberal approach[3]. In the approved RIL-Brookfield tower infrastructure deal, the two were found to be vertical participants and CCI went ahead to analyse if there were any vertical overlap. With RIL’s acquisition of stake in Saudi AramCo at hold, it needs to be more careful with the investment and regulatory concerns with the activities of its digital arm, Jio.

The strategic investment for acquiring the minority stake is not simply a passive investment. The filing of notice as per Regulation 4 of the Combination Regulations in itself is indicative of the fact that the transaction is not in the ordinary course of business and is backed with an intent of strategic investment to bring in change in control. Thus, the responsibility of CCI is to peruse not only the potential adverse effects on competition but also the potential concerns it may give rise to. It would be interesting to see whether the acquisition of minority stake in India’s leading telecom arm would grant any control to Facebook. Let us look at the possible anti-trust issues that the deal poses:

Dominance: Boon or a bane?

Both Jio and Facebook seem to be dominant players in their respective markets. The  Telecom Regulatory Authority of India’s data points to the fact that Jio has the highest market share in terms of user base and revenue sharing in the telecom market as it holds 32% share in the 1.15-billion-user Indian mobile services market, taking its total user base to 369.93 million, surpassing its competitors Bharti Airtel and Vodafone-Idea. It must also be noted that, unlike others, all Jio connections are 4G based, thus, having a strong base of smartphone users.

Now, Facebook primarily operates via three platforms: facebook.com, Instagram and WhatsApp. All of them seem to be dominant players in the market they operate in. We are only concerned with WhatsApp. Its relevant market seems to be smartphone-based social media messaging platform. WhatsApp has more than 400 million[4] confirmed users in India, while around 600 million[5] people have access to internet[6] in the country. Other competitors to WhatsApp in India are hike, WeChat, Telegram, which only have a fraction of the users as WhatsApp.

Jio plans to revolutionise JioMart by combining it with WhatsApp to integrate small and medium scale ‘kirana’ businesses to cater to the demand. This would firstly strengthen the position of mom-pop shops in the local market by sewing them into the digital framework and secondly would attempt to penetrate into another market by using the dominance of WhatsApp.

More so, WhatsApp could possibly allow JioMart to operate on its messaging platform. If done so, and in the manner that WhatsApp comes with pre-embedded JioMart platform, it could lead to abuse of dominance under Section 4(2)(d) as installing WhatsApp would be the main contract and pre-embedded JioMart would be the unconnected supplementary obligation. This would also mean that the users would not be allowed to embed any other e-commerce portal on WhatsApp messenger, which would again seem to be causing disruption in the competition in the market and unfair to consumers as it would leave no choice to them but accept the imposed deal.

Another advantage post the deal would be of control over consumer data. As of now, RIL Chief has said that there is no agreement for transferring of consumer data between the parties; however, this does not erode the possibility of entering into such agreements in the near future. While control over data has been used by Competition Regulators in examining the e-commerce and digital platforms’ anti-competitive conduct (viz. Amazon-Flipkart case[7], Sonam Sharma v. Apple Inc. USA[8]), this factor in the present case must be dealt with utmost seriousness and conviction to ensure survival of healthy competition in the e-commerce market, especially at a time when Facebook has been imposed with $5 billion fine over data privacy violation[9].

Appreciable Adverse Effect on Competition: Is it too soon?

Where the strategic investment is with the intent to enter into a different segment using the control in respective markets to enter into an entirely different product market, the parameters to check the potential adverse effect on the competition must be comprehensive. In re, Google LLC[10], CCI observed that there is a need to not only delineate primary relevant market but also associated markets to relevant markets that have been affected by the conduct of the parties involved. Section 20 sub-section (4) lists the factors that CCI must consider to conclude if there is any appreciable adverse effect on the competition because of the proposed combination.

The essence of this checklist is to look for horizontal or vertical overlap in the activities post acquisition. While there seems to be no horizontal overlap, there definitely could be a case of vertical integration. Jio provides internet to smartphone, smartphones use internet to operate WhatsApp and now WhatsApp would integrate JioMart. It is not only vertical integration but use of dominant position in one market to enter into a new market, and thus would be likely to effect adversely the natural competition in the ‘phygital’ commerce market (as has been recently termed).

The analysis must be based not only on the market share of the deal participants both pre and post-acquisition but must also mindfully address the data sharing aspect of the deal, considering these data mammoths’ conduct in the recent past. The US Court imposing record $5 billion fine on Facebook for privacy violations is in itself a warning for the Indian regulators to intervene in this far reaching deal especially, to protect the Indian start-up movement that is also an important wing of the Digital India flight. The deal no doubt has potential of creating business and commercial barriers for local tech start-ups. The primary purpose of the merger control regime is to foresee adverse effects and to live up to this objective, CCI must take cognizance of the interrelatedness of this deal.

One can at the same not ignore the importance of balance between the commercial interest and the consumer welfare interests. Though the weighing scale can never be equal for both, what is important for CCI as a regulator of omnipotent economic concerns is that it shouldn’t step on the commercial prospects deal participants like such to ensure distributive justice.

The deal will undoubtedly push the CCI’s merger control jurisprudence into a comprehensive one and shall be significant in laying down a vigilant yet compendious framework for future deals. While we are still speculating about the nature of the deal, JioMart has started testing WhatsApp for grocery orders in pursuance of the proposed deal. “The customer initiates the interaction on WhatsApp, checks out the grocery order on JioMart webpage, gets connected with a retail store on WhatsApp and then customer picks up the order from Kirana and pays in cash,” said the news report[11].

*Prateek and Samanvi are pursuing Master of Laws (LL.M.) in Corporate and Commercial Law from Nalsar University of Law, Hyderabad

[2] Competition Commission of India (Procedure in regard to the transactions of business relating to combinations) Regulations, 2011

[3] CCI has cleared over 600 combinations, and has not blocked even a single one. Only eight were subject to detailed Phase II enquiry, India: Merger Control (4th Edn.), AZB Partners, https://www.azbpartners.com/bank/india-merger-control-4th-edition/, 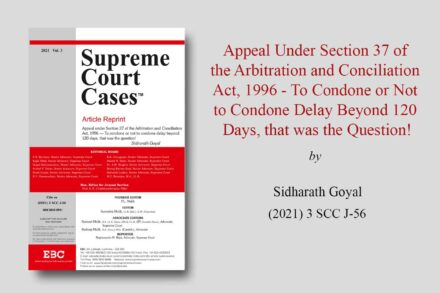 Appeal Under Section 37 of the Arbitration and Conciliation Act, 1996 – To Condone or Not to Condone Delay Beyond 120 Days, that was the Question! 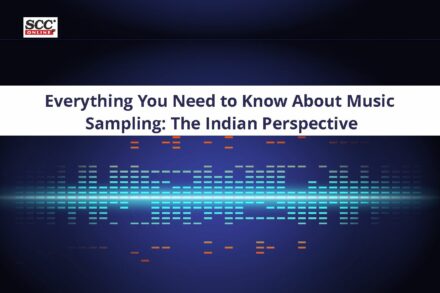 Everything You Need to Know About Music Sampling: The Indian Perspective