Gauhati High Court: Rumi Kumari Phukan, J., allowed and further disposed of the petition in view of the matter being settled outside the Court.

Facts pertaining to the present petition were that the respondent 2 lodged an FIR raising allegations of mental torture, dowry and her father-in-law outraging her modesty. Adding to the said allegations, she filed the FIR with certain other allegations against her husband and father-in-law under Section 498 (A)/ 354 Penal Code, 1860.

Further, during the course of the trial when the trial court impleaded the accused’s they all collectively came forward for quashing the entire proceedings on the ground that they have already settled the matter and the informant has no more interest to proceed with the case.

High Court noted the affidavit sworn by the respondent/wife in respect to the settlement in which it was stated that she is not willing to pursue the case as the matter was already settled amicably between the parties.

Court in the present matter noted that it was in respect to matrimonial offence and the victim herself came forward apprising about the amicable settlement, which implies that the victim/respondent will not support her case.

“Amicable settlement in a case of matrimonial offence can be allowed for the sake of social justice so as to maintain harmony in the society.”

Stating the above, the Court held that as the victim herself has buried her grievances against all the accused persons, the further proceeding will yield no result and it will be an abuse of process of law. [Hiranmoy Das v. State of Assam, 2019 SCC OnLine Gau 5018, decided on 04-11-2019] 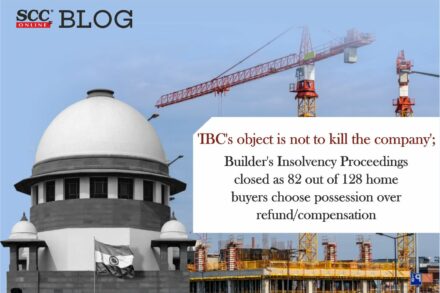 ‘IBC’s object is not to kill the company’; Builder’s Insolvency Proceedings closed as 82 out of 128 home buyers choose possession over refund/compensation: SC

[Custody] MP HC | Welfare of child is of paramount importance; Mother who nurtured the child for 9 months in womb is certainly entitled to custody