Agricultural Produce, Livestock and Markets — Allotment of shops — Daud Committee norms for allotment of shops in new wholesale market: Due to huge competition for allotment, there was claim for one vacant large shop (gala) but four eligible claimants (viz. two appellants and R-3 and R-4), hence, instead of allotment by lottery method, offers from eligible claimants should be invited in sealed covers. Directions issued accordingly. [Hande Wavare & Co. v. Ramchandra Vitthal Dongre, (2019) 7 SCC 608]

Civil Procedure Code, 1908 — Or. 37 R. 3 — Leave to defend: Principles to be followed while granting leave, unconditional or conditional, summarized. Ultimate objective of summary suit is expeditious disposal of commercial dispute. Where defendant discloses facts of prima facie fair and reasonable defence, unconditional leave may be granted. It relates to subjective satisfaction of court on basis of materials that may be placed before it. However, where court is satisfied that defence is plausible or probable and is not sham or moonshine but still it has some doubt over defence, then conditional leave may be granted to defend. In case of unconditional leave, subjective satisfaction of court is involved whereas in conditional leave element of discretion vests with court. This discretion is not absolute but required to be exercised judiciously tempered with what is just and proper in facts of particular case. While exercising discretion it is required to maintain delicate balance between respective rights and contentions by not passing an order which may ultimately impede speedy resolution of dispute. [Sudin Dilip Talaulikar v. Polycap Wires (P) Ltd., (2019) 7 SCC 577]

Constitution of India — Art. 136 — Ram Janmabhoomi/Babri Masjid suit — Dispute as to ownership of land on which stood place of worship: In this case, there was resumption of hearing of cases/appeals on failure of mediation in appeals arising out of Suits Nos. 3 and 4, hence, parties directed to indicate pleadings and evidence on which they sought to rely so that Registry can keep such documents ready for perusal of Court. [Mohd. Siddiq v. Suresh Das, (2019) 7 SCC 633]

Criminal Law — Criminal Trial — Circumstantial Evidence — Generally: It is well settled that in the cases of circumstantial evidence, the circumstances from which the conclusion of guilt is to be drawn, should in the first instance, be fully established, and all the facts so established, should be consistent only with the hypothesis of guilt of the accused. The circumstances should be of a conclusive nature, and should be such, as to exclude every hypothesis, but the one proposed to be proved. In other words, there must be a complete chain of evidence, as not to leave any reasonable ground for a conclusion consistent with the innocence of the accused, and it must be such, as to show that within all human probability, the act must have been done by the accused and none else. [State of Rajasthan v. Mahesh Kumar, (2019) 7 SCC 678]

Evidence Act, 1872 — Ss. 101 and 106 — Burden of proof in criminal case — Lies upon whom: General rule is that burden of proof is on prosecution. However, S. 106 was introduced not to relieve prosecution of their duty, but it is designed to meet situation, in which it would be impossible or difficult for prosecution to establish facts which are especially within knowledge of accused. [Ranjit Kumar Haldar v. State of Sikkim, (2019) 7 SCC 684]

Service Law — Reinstatement/Back Wages/Arrears — Back wages — Entitlement to: Back wages cannot be claimed for period of unauthorised absence or absence without justification. However, back wages can be claimed where employee is restrained from engaging in service. [United India Insurance Co. Ltd. v. Siraj Uddin Khan, (2019) 7 SCC 564] 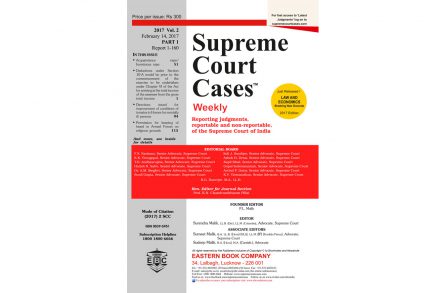