The appellants were accused of assaulting the complainant and abusing him using filthy language while referring to his caste “Adiwasi”. An FIR was lodged and a criminal case was registered under Sections 324, 504, 506 read with Section 34 IPC and under Section 3 (1)(r)(s) of the Scheduled Caste and Scheduled Tribes (Prevention of Atrocities) Act, 1989. Apprehending arrest by Police, the appellants rushed to the court of Additional Sessions Judge for the relief of anticipatory bail under Section 438 CrPC. However, he rejected all the applications. This order was the subject matter of present appeals.

S.K. Chavan and R.J. Nirmal, Advocates representing the appellants submitted that they were students taking education in Agricultural College who had no concern with the alleged crime and were falsely implicated. Per contra, D.S. Jape, Assistant Public Prosecutor appearing for the State submitted that Section 18-A of SC/ST Act puts an embargo on the Court for exercising powers under Section 438 CrPC.

On perusing the FIR, the High Court was of the view that prima facie, ingredients of Section 3(1)(r)(s) did not match with factual score of the present case. Relying on its earlier decisions, the Court observed, “in spite of bar under Section 18 of the Act of 1989, for invocation of powers under Section 438 of the CrPC, it is still open to this Court to find out by looking to the FIR of the case itself is as to whether prima facie case is made out by the complainant against appellants.” Opining that incriminating circumstances to show that “intentional insult” or “intimidation with intent to humiliate” the complainant within public view on the part of appellants were lacking in this case, the High Court held it to be a fit case where anticipatory bail may be granted to them. Hence, the impugned order was quashed and the appeals were allowed. [Krishna v. State of Maharashtra, 2019 SCC OnLine Bom 341, decided on 27-02-2019] 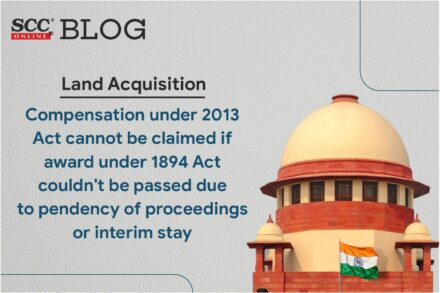 Land Acquisition| Compensation under 2013 Act cannot be claimed if award under 1894 Act couldn’t be passed due to pendency of proceedings or interim stay: Supreme Court