Supreme Court: In the plea filed by a man whose wife and daughter were allegedly gangraped in July last year on a highway near Bulandshahar, seeking transfer of the case to Delhi and lodging of an FIR against former Uttar Pradesh Minister Azam Khan for his controversial statement that the gangrape case was a “political conspiracy”, the bench of Dipak Misra, CJ and AM Khanwilkar and Dr. DY Chandrachud, JJ referred the matter to a five-judge constitution bench to decide the question as to whether a public functionary or a minister can claim freedom of speech while airing views in a sensitive matter which is under investigation.

The Court also expressed concern over the misuse of social media platforms and said that people disseminated wrong information even about the court proceedings. Senior Advocate Fali S. Nariman, who is assisting the bench as an amicus curiae, submitted before the Court that a lot of misinformation and abuses are there on social media platforms and he has stopped looking at them. To this, Senior Advocate Harish Salve added that he had deleted his Twitter account.

The Bulandshahar rape case happened on the night of July 29 last year when a group of highway robbers stopped the car of a Noida-based family and sexually assaulted a woman and her daughter after dragging them out of the vehicle at gun-point. Azam Khan had, in a public address, termed the entire incident as a “political conspiracy only and nothing else”. Harish Salve submitted before the Court that ministers cannot have personal views on official business matters as whatever the person says, must reflect government policy.

Last year, on 29.08.2016, the Bench of Dipak Misra and C. Nagappan, JJ had asked Fali S. Nariman to assist the Court in determining, inter alia, whether the fundamental right of speech and expression would be governed under reasonable restriction of decency or morality or whether other preferred fundamental rights would also have an impact on it. 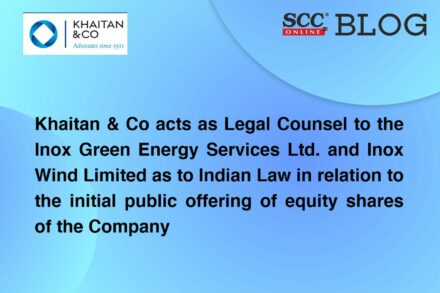 Khaitan & Co acts as Legal Counsel to the Inox Green Energy Services Ltd. and Inox Wind Limited as to Indian Law in relation to the initial public offering of equity shares of the Company

By Prachi Bhardwaj Published on March 3, 2020

Point of Sale (POS) Devices and Goods required for their manufacture exempted from Central Excise Duty till March 31, 2017