Supreme Court: Dealing with the question as to whether after transfer of a disciplinary proceeding, as per the mandate enshrined under Section 36B(1) of the Advocates Act, 1961 to the Bar Council of India (BCI) from the State Bar Council, can the BCI, instead of enquiring into the complaint and adjudicating thereon, send it back to the State Bar Council with the direction to decide the controversy within a stipulated time, the Court held that the legislature never intended a complaint made against an Advocate either from the perspective of the complainant or from the delinquent to be transferred to BCI, again to be sent back. It was held that BCI, while exercising original jurisdiction on transfer of a complaint, cannot exercise the appellate jurisdiction.

The Court, however, took note of the fact that on many occasions disciplinary authority of the State Bar Council does not dispose of the complaint within the stipulated period, as a consequence of which the proceeding stands transferred to the BCI. Looking down upon such practice, the Court said that once a complaint is made by a litigant, it has to follow a definite procedure and is required to be dealt with as per the command of the Act to conclude the disciplinary proceeding within a period of one year from the date of receipt of the complaint or the date of initiation of the proceedings at the instance of the State Bar Council. Not to do something what one is required to do, tantamount to irresponsibility and the prestige of an institution or a statutory body inheres in carrying out the responsibility.

The bench of Dipak Misra and A.M. Khanwilkar, JJ, hence, directed the State Bar Councils to take a periodical stock of cases in each meeting with regard to the progress of the Disciplinary Committee, find out the cause of delay and guide themselves to act with expediency so that the Council, as a statutory body, does its duty as commanded under the Act. [Ajitsinh Arjunsinh Gohil v. Bar Council of Gujarat, 2017 SCC OnLine SC 351, decided on 06.04.2017]

Madras HC | What is the essential condition for validity of any marriage? Detailed Report highlighting legality of marriage of a girl below 18 years of age 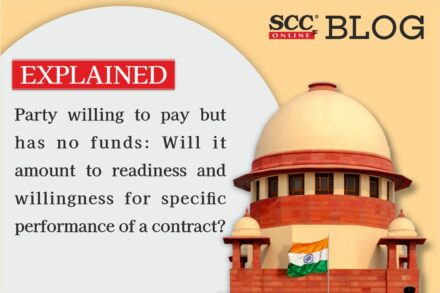 Explained| Party willing to pay but has no funds: Will it amount to readiness and willingness for specific performance of a contract?