Uttaranchal High Court: Sharad Kumar Sharma, J. dismissed a writ petition which involved the isuue pertaining to regulating the frontier borders of the country, adjoining to the ‘Line of Actual Control’, which adjoins and shares the boundary lines of our neighbouring country, China, which is approximately about 20 to 25 Kms. only away from the land, in dispute, which is proposed to be acquired for the purposes of meeting out the defence need of the ITBPF, i.e. ITBP.

The Court identified the issue as to whether despite of there being certain limited statutory protection; having being granted to a specified class of reserved community, i.e. the Scheduled Tribes, whether their personal rights, if it is, at all prevailing under law, would prevail over the right and interest of the nation, i.e. our Motherland, particularly, when it calls for defending the critical and strategic border of our Nation, in order to have preparedness, to meet any unprecedented insurgencies or army aggression, by the neighbouring county China.

The petitioners who are the residents of the village “Milam”, where the land in dispute is situated and which is proposed to be acquired for defence purposes. The petitioners contended that since they belonged to a Scheduled Tribes i.e. “Bhotia”, which in itself is a class of Tribes protected by the Constitution of India, as well as, under the provisions of the Right to Fair Compensation and Transparency in Land Acquisition, Rehabilitation and Resettlement Act, 2013 (hereinafter to be called as Act of 2013), their land ought not to have been acquired, even for the purposes of meeting out the requirement of the defence personnel, as because of their self acclaimed immunity, which they have claimed to have vested in them, in the light of the provisions contained under Section 40 to be read with Section 41 of the Act of 2013.

The Court observed that if the purpose of acquisition, which has been shown in the impugned Notification of 1st August, 2015, itself is taken into consideration, it is exclusively intended to meet the emergent need, for the purposes of establishment of the frontier chauki, i.e. Border Out Post (in short BOP), in Village Milam for the 14th Wing of ITBP. The Court was of the view that defence purposes of the country acquires the drivers seat, and would be predominantly overriding all the restrictive intentions of the Act of 2013, since being contrary to the constitutional intention, for protection of individual rights or even for a right of a class of Society, because no individual rights or even for that matter even public rights, can be at any moment be taken to be the superior rights, than to the right of defence of the Country, because of which, we all citizens are thriving peacefully, because our frontiers areas of the Country, are in the safe hands of our gallant army and para military personnels.

The Court further opined that the area of hearing of objections, under the different heads, which had been provided therein under Section 15 of the Act of 2013, will not be attracted or have its applicability, because the purpose herein as expressed in the notification of 08.08.2015, was for establishment of Border Out Post, adjoining to the Line of Actual Control, would not be an aspect, which at all could be left open for speculations and assessment by the executive or administrative authorities, because it could be best and with utmost perfection be only scrutinized by the defence forces authorities, to suit their need of deployment of armed personnel or establishment of their border out posts, which cannot be left open to be assessed by the executive. The Court relied on the judgment of Supreme Court in Citizens for Green Doons v. Union of India, 2021 SCC OnLine SC 1243 where necessity of the defence of the country was considered in detail. The court further discussed plethora of judgments  in relation to the matters of acquisition of land and found that in the present case since there is an imminent threat nor the case has been projected by the petitioners that they would be deprived of an adequate compensation to be made payable to them as per the provisions of the said Act, the aforesaid principles and the safeguards taken by the Supreme Court in the judgements will come to the rescue to the State to apply the theory of ‘eminent domain’ when there is a deprivation of the property, which has been saved by Article 300A of the Constitution of India.

The theory of “eminent domain” grants an exclusive and inherent dominant power with the Government, which is the supreme owner of any land falling within the territory of the Nation, to take over the land and property, though under the terms and conditions of the given set of law, in order to meet out the emergent country requirement, due to any army aggression, army preparedness to face any sudden enemy insurgency, National calamity or other areas of such emergent need of the country and for the country, where time always plays an important pivotal role and where it is exclusively only the need of the country at large, which is to be considered.

Court was of the view that it could only be assumed to a citizen when they are secured when the country’s defence structure and its strength and its preparedness to meet any sudden, military crisis is augmented by providing, its defence personnel or any other such agencies with sufficient infrastructural facilities, and particularly, at the strategic point, like the one, in question, where India is sharing an international border, which is hardly 20 to 25 km. away from the land in question, adjoining to the Line of Actual Control. Since the land is being acquired for the defence needs, this Court was of the view, that irrespective of whatsoever protection has been marginally granted by the Statute, it cannot be compromised under any set of circumstances to mitigate the defence need of the country, and particularly, when as per the ratios dealt with above, the petitioners right as envisaged by Article 300A are still protected.

Mr V.D. Bisen, Brief Holder, for the State of Uttarakhand. 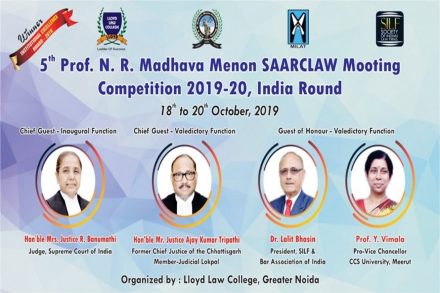