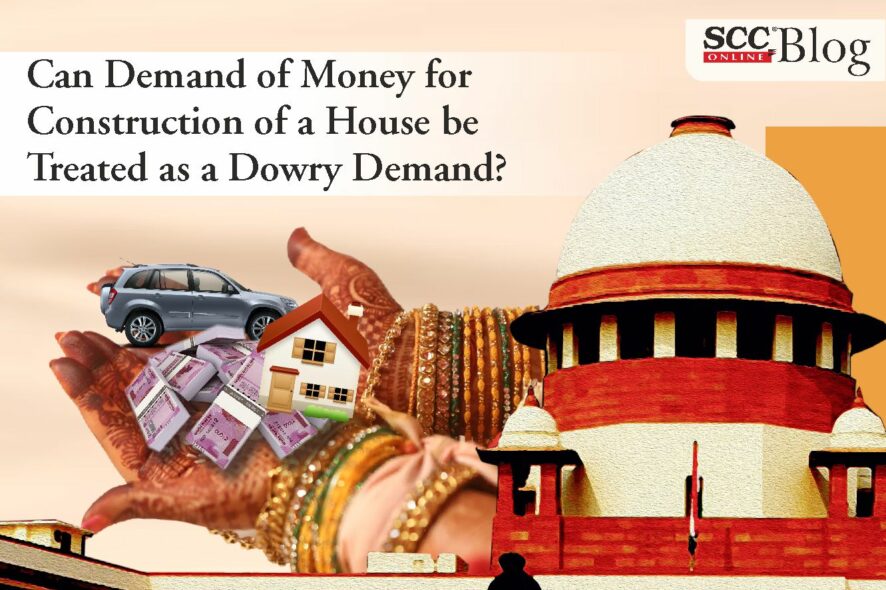 Supreme Court: In a case where the Madhya Pradesh High Court had held that demand of money for construction of a house cannot be treated as a dowry demand, the 3-judge bench of NV Ramana, CJ and AS Bopanna and Hima Kohli*, JJ has found the said observation erroneous and has held that the word “Dowry” ought to be ascribed an expansive meaning so as to encompass any demand made on a woman, whether in respect of a property or a valuable security of any nature.

The deceased, Geeta Bai, was 18 years old when she got married on 7th May, 1998. In less than four years of her marriage, Geeta Bai committed suicide at her matrimonial home by pouring kerosene oil and setting herself on fire. She was admitted in a burnt condition in the Community Health Centre, Baroda on 20th April, 2002 and breathed her last on the same day. At that time, she was five months pregnant. While the Mother-in-law and Brother-in-law were acquitted by the Trial Court, the husband and father-in-law of the deceased were convicted under Sections 304-B, 306 and 498-A IPC and were sentenced to rigorous imprisonment for life for the first offence, RI for a period of seven years with fine for the second offence and RI for three years with fine for the third offence.

The conviction and sentence imposed on the respondents was primarily based on the evidence maternal uncles of the deceased who stated that the respondents had been demanding money from the deceased for constructing a house which her family members were unable to give. As a result, she was constantly harassed and subjected to cruelty, finally leading to her committing suicide.

The High Court gave clean chit to the father-in-law and also set aside the order of conviction in respect of the husband under Sections 304B and 306 IPC. However, his conviction was sustained under Section 498-A IPC, but the sentence of RI for three years imposed on him was reduced to the period already undergone by him on the ground that the demand of money for construction of a house cannot be treated as a demand for dowry.

In a three Judge Bench decision of this Court in Rajinder Singh v. State of Punjab, (2015) 6 SCC 477, Section 2 of the Dowry Act was split into six distinct parts for a better understanding of the said provision, with the first part stating,

Since the word “dowry” takes in its ambit any kind of property or valuable security, the Court held that the High Court fell into an error by holding that the demand of money for construction of a house cannot be treated as a dowry demand.

“The Latin maxim “Ut Res Magis Valeat Quam Pereat” i.e, a liberal construction should be put up on written instruments, so as to uphold them, if possible, and carry into effect, the intention of the parties, sums it up. Interpretation of a provision of law that will defeat the very intention of the legislature must be shunned in favour of an interpretation that will promote the object sought to be achieved through the legislation meant to uproot a social evil like dowry demand.”

The Court, hence, held that the word “Dowry” ought to be ascribed an expansive meaning so as to encompass any demand made on a woman, whether in respect of a property or a valuable security of any nature.

“When dealing with cases under Section 304-B IPC, a provision legislated to act as a deterrent in the society and curb the heinous crime of dowry demands, the shift in the approach of the courts ought to be from strict to liberal, from constricted to dilated. Any rigid meaning would tend to bring to naught, the real object of the provision. Therefore, a push in the right direction is required to accomplish the task of eradicating this evil which has become deeply entrenched in our society.”

Ingredients of Section 304-B IPC

The most fundamental constituent for attracting the provisions of Section 304-B IPC is that the death of the woman must be a dowry death. Four pre-requisites for convicting an accused for the offence punishable under Section 304- B are as follows:

The Court hence held that the High Court fell in an error in drawing an inference that since the deceased had herself joined her husband and father-in-law, respondents herein and asked her mother or uncle to contribute money to construct a house, such demand cannot be treated as a “dowry demand”. On the contrary, it observed that the evidence brought on record showed that the deceased was pressurized to make such a request for money to her mother and uncle.

“It was not a case of complicity but a case of sheer helplessness faced by the deceased in such adverse circumstances.”

The Court held that such glairing circumstances, when viewed together, can hardly mitigate the offence of the respondents or take the case out of the purview of Section 304-B IPC, when all the four pre-requisites for invoking the said provision stand satisfied, namely,

Tel HC | Can cousin of a husband who was accused of offence under S. 498-A IPC be also roped in on grounds of instigating and supporting husband? Read on

Utt HC | Reservations in favor of sportsperson is traceable to Article 16(1); atrocities of exhaustiveness of reservation under Art. 16(4) observed by the Court