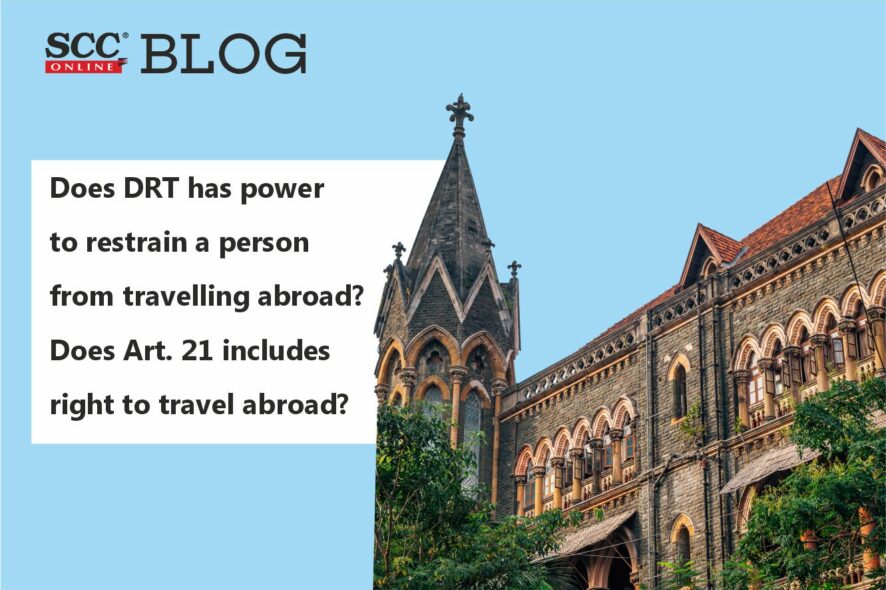 Bombay High Court: Expressing that the right to travel abroad has been spelt out from the expression “personal liberty” in Article 21 of the Constitution, A.S. Chandurkar and Amit Borkar, JJ., observed that, the provisions under the Recovery of Debts Due to Banks and Financial Institutions Act, 1993, do not impliedly confer such powers on the Debt Recovery Tribunal to restrain a person from travelling abroad.

The instant petition raised an important question with regard to the interpretation of Article 21 of the Constitution of India as to whether the expression “personal liberty” occurring in the said Article includes the right to travel abroad?

Whether refusal to grant permission to travel abroad results in the infringement of Article 21 of the Constitution of India?

The petitioner had challenged the order passed by the Debt Recovery Tribunal refusing to grant permission to travel abroad for a limited time to attend the marriage of the petitioner’s sister-in-law.

Article 21 of the Constitution of India

“21. No person shall be deprived of his life or personal liberty except according to procedure established by law.”

While stating that it is a well settled that the expression “personal liberty” includes right of a citizen to travel abroad and return to the home country without any impediment, direct or indirect. The expression “personal liberty” has not been used in the restricted sense of freedom from arrest and detention but had been used in a much wider sense.

The above-said right emanates from the freedom of a person and the right to travel abroad and return to the country without impediment, direct or indirect, is contained in the expression “personal liberty” occurring in Article 21 of the Constitution.

“…Law in this Article means the law enacted by a competent Legislature.”

Further, the Bench added that, the mandate of Article 21 is that the deprivation of “personal liberty” has to be “according to procedure established by law.”

The right to travel abroad is right distinct and separate from the right of freedom of movement in a foreign country.

The right to travel abroad of a citizen of India was considered in the Supreme Court in Maneka Gandhi v. Union of India, (1978) 1 SCC 248.

Additionally, the Court referred to Sub-Section 12, 13(A), 17 and 18 of Section 19 of the Recovery of Debts Due to Banks and Financial Institutions Act, 1993 and stated that the Tribunal is not conferred with specific power to restrain a person from leaving the country.

In Court’s opinion, Section 22 confers the procedural right to regulate proceedings before it.

While concluding the matter, the Bench held that the order refusing permission to travel abroad has been made in contravention of the provisions of Article 21 of the Constitution and is violative of the right guaranteed to the petitioner under Article 21.

Further, the State had not made any law or provision in the said Act seeking to deprive or regulate the right of a person to travel abroad.

Hence, the order was set aside.

“…the purpose of depriving or regulating the right of a person to travel abroad, it is necessary to have a procedure established by law enacted by a competent Legislature in the said act or by way of independent legislation which is absent herein.”

In view of the above, the Debt Recovery Tribunal had no power to restrain a person from travelling abroad in the absence of specific powers to that effect. [Anurag v. Bank of India, 2022 SCC OnLine Bom 1160, decided on 7-6-2022]

Mr A. T. Purohit, Advocate for Respondent No.1.

Kerala High Court: Bechu Kurian Thomas, J., held that if the final report had not been filed and no cognizance had been taken it would mean that there is no criminal proceeding pending and the Passport Authority are free to decide the grant of passport.

The petitioner had challenged communication issued by the Regional Passport Officer informing him of the shortcomings in his application for issuance of a passport.

Noticeably, the petitioner was involved in a case for offences under Sections 406, 419 and 420 of IPC apart from sections 12(1)(a), (d) of Passports Act, 1967. Claiming that the police had dropped the proceedings against him the petitioner had applied for issuance of passport which was earlier denied due to adverse report on the pendency of the crime. The petitioner contended that despite having proper police clearance and despite the closure of the crime registered against him, the passport authorities were harassing him by referring to those false crimes.

Section 6(2)(f) of the Passports Act, 1967 makes it mandatory for the passport issuing authority to reject the application for issuance of a passport if “criminal proceedings are pending” in any Court in India.

Thus to make the deprivation of the personal liberty of the right to travel abroad, just, fair and reasonable, the Government of India in exercise of the powers under section 22 of the Act, issued a notification (as GSR 570(E) dated 25-8-1993), which is statutory in character, exempting citizens of India against whom criminal proceedings are pending before a criminal court from the operation of section 6(2)(f) of the Act on condition that the applicant produces orders from the Court concerned permitting to depart from India.

Opining that there are still lacuna about the parameters that govern the grant of no objection by the criminal courts, the Bench stated that though it is for the legislature to fill up the lacuna through proper amendments, in the absence of such amendments, the Bench expressed,

“It is essential that till then there must be some yardstick to govern the grant of such no objections by criminal courts as otherwise, there is a possibility of the grant of permission turning into a subjective satisfaction rather than an objective one.”

In Muhammed v. Union of India, 2018 (4) KHC 945, the Court had clarified that, a criminal proceeding is pending only when cognizance is taken and in the absence of a final report filed in court, a criminal case cannot be treated as pending. It was also held that mere registration of a crime does not invoke either section 6 or section 10 of the Act and the police verification report must mention the stage of the crime.

Motivated by the pristine principle that an accused is presumed innocent unless and until he is found guilty, and the fact that false prosecutions can mar the career and future of a person and  that criminal trials take ages to complete, the Bench expressed that,

“The grant of permission by the Magistrate enabling an accused to travel abroad will be of great significance, especially since it will be a process of balancing the fundamental right of a citizen to travel abroad and the need to ensure the presence of the accused during trial.”

Foreseeing the probability of such consideration by Magistrate being of subjective satisfaction rather than the required objective satisfaction, and to avoid the same, the Bench laid down following parameters to govern the grant of permission for future guidance:

Emphasising that aim of granting permission is to balance the competing claims of fundamental right to travel abroad and the need to ensure the presence of the accused during trial, the Bench clarified that the parameters laid down were not exhaustive.

Resultantly, the petitioner was directed to approach the jurisdictional Magistrate and obtain appropriate orders if the final report had been filed and cognizance taken. However, in case the final report had not been filed and cognizance not taken yet, the Bench clarified that that would imply that no criminal is proceeding pending and the Passport Authority would be free to decide the grant of passport without permission from the Magistrate.  [Thadevoose Sebastian v. Regional Passport Office, WP(c) No. 15182 of 2021, decided on 30-09-2021]

For the Respondent: ASG P. Vijayakumar and CGC Jaishanker