Delhi High Court: In a trade mark infringement suit filed by the UK based company Raleigh for protecting its mark ‘RALEIGH’, the Single Judge Bench of Prathiba M. Singh, J. restrained the Ludhiana based company from manufacturing cycles, bikes, or any other product under the trade mark ‘RALLIES’.

Plaintiff was in the business of manufacturing and selling bicycles/cycle/bikes and operated a wide range of bike/bicycle brands throughout Europe including ‘RALEIGH’. Plaintiff’s business was founded in 1887 in the name of Raleigh Cycle Co. Ltd. and the mark ‘RALEIGH’was used globally for products like children’s bikes, city bikes, mountain bikes. Plaintiff used the website www.raleigh.co.uk, which was registered in 1998. Plaintiff’s bicycles/cycles/bikes were imported first time in India in 1910 and were sold under the mark ‘SEN-RALEIGH’. Thereafter, the plaintiff commenced the use of the mark ‘RALEIGH’ and its different variations in India in 1939.

In 2012, a distributorship and license agreement was entered between the plaintiff and Naren International, a company in Ludhiana, Punjab for exclusively manufacturing, importing, selling, and distributing ‘RALEIGH’ bicycles products in India. Moreover, the plaintiff’s mark ‘RALEIGH’ was also a registered trademark in India.

Defendants based out of Ludhiana, Punjab were engaged in the manufacturing and selling of bicycles, city bikes, etc. under the mark ‘RALLIES’. A trade mark application was filed by the defendants in 2002 for the word mark ‘RALLIES’ in Class 12 claiming a user since 1999, but the same was rejected. Thereafter, defendants filed trade mark application in Class 12 for bicycles, and their parts including tyres and tubes claiming usage from 1999 and the same was granted registration. Defendants promoted and sold their products on their website www.ralliesbikes.com which was registered in 2020.

Submissions on behalf of the Petitioner:

Submissions on behalf of the Respondents:

The Court opined that since the defendants had agreed to give up further manufacture and sale of bicycles, motor-bicycles, and part of all such goods, baby carriages, perambulators, sidecars and, trailers under the mark ‘RALLIES’, therefore, the interim injunction would be liable to be granted. Thus, the Court held that the defendants would cease manufacture and advertising in physical shops and through online platforms including e-commerce platforms of all the goods under the mark ‘RALLIES’ or any other mark which was identical or deceptively similar to the plaintiff’s mark ‘RALEIGH’.

The Court granted time till November 2023 to the defendants to dispose of the existing stocks and there should be no fresh manufacture of the products under the mark ‘RALLIES’. Further, the Court also held that defendants should take down their website www.ralliesbikes.com within one week.

For the Petitioner: Advocate Manisha Singh;

For the Respondent(s): Advocate Atul Sharma;

Strict proof of marriage not necessary for the purpose of S. 125 CrPC 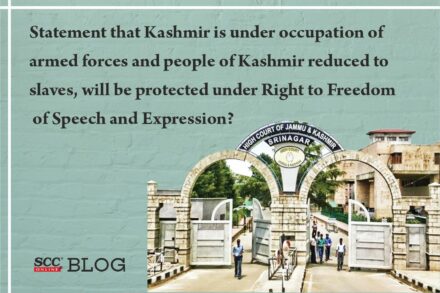 Statement that Kashmir is under occupation of armed forces and people of Kashmir reduced to slaves, will be protected under Right to Freedom of Speech and Expression?J&K and Ladakh HC answers

Absent direct evidence, SC invokes S. 113-A of Evidence Act to uphold conviction of husband, mother-in-law for abetment of suicide