Supreme Court: In an appeal relating to the assassination of Rajiv Gandhi in 1991, the division bench of B.R. Gavai and B.V. Nagarathna, JJ. has said that the conduct of all the appellants is satisfactory, thus, directed that all the appellants be deemed   to   have   served   their   respective   sentences and to be set at liberty.

The Court noted that out of the six, the death sentence was confirmed in the case of appellants S. Nalini,  Suthendraraja  and Sriharan, which was subsequently converted to life imprisonment on account of inordinate delay in deciding their mercy petition, and the   rest   of   the   appellants were convicted   and   sentenced   to   life imprisonment.

Further, on 09-09-2018, the State Cabinet passed a resolution recommending the release of all the appellants including   the   original   convict   A.G. Perarivalan.

The Court relied on A.G. Perarivalan v. State, 2022 SCC OnLine SC 635, where the Court while dealing with the issue that whether the Governor was bound by the decision of the State Cabinet, or he could refer the matter to the Union of India for its opinion, has held that “Governor, in the matter of remission of an appellant convicted under Section 302, was bound by the advice of the State Cabinet” and observed that indisputably, in the present case also, the State Cabinet   had   resolved   to   grant   remission   to all   the appellants.

The Court examined   the   case   of   each   of   the appellants in light of A.G. Perarivalan (supra) and said that the conduct of all the appellants was satisfactory, as some of them during the period of incarceration, have obtained degrees, did charity work and some were also suffering from various ailments. Further, the Court said that S.   Nalini,    is   a woman and has been incarcerated for a period of more than three decades and her conduct has also been found to be satisfactory.

Thus, the Court directed that all the appellants be deemed   to   have   served   their   respective   sentences and to   be   set at liberty. 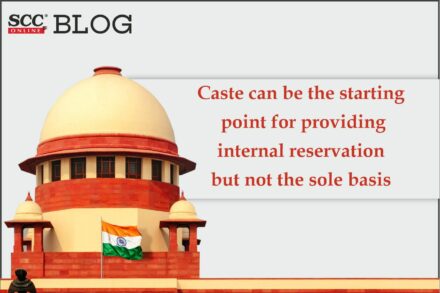 Caste can be the starting point for providing internal reservation but not the sole basis: Supreme Court