Allahabad High Court: In an appeal filed under Section 19 of the Family Courts Act, 1984 for setting aside the judgment dated 04.08.2022 and the decree dated 12.08.2022 by the Family Court, whereby the appellant’s suit for restoration of conjugal rights, has been dismissed, the division bench of Surya Prakash Kesarwani and Rajendra Kumar-IV, JJ. has held that in the absence of any cogent explanation for the second marriage to the first wife, the action of the husband would amount to cruelty to his first wife. Therefore, it would be inequitable to compel the first wife against her wishes to live with such a husband and it would also amount to breach of her fundamental rights guaranteed under Article 21 of the Constitution of India.

The appellant/husband has contracted a second marriage and suppressed the fact from the respondent/wife. Further, the husband has admittedly told the wife neither about his intention to contract a second marriage nor explained to her that he shall give equal love, affection and treatment to both the wives.

The Court referred to the decision in Dilbar Habib Siddiqui v. State of U.P., 2010 SCC OnLine All 965, and observed that Sura 4 Ayat 3 of the Holy Quran provides for giving due care and provisions for a muslim woman, thus, bigamy is not sanctified unless a man can do justice to orphans, who in the present case are the wife and her children, and the Ayat mandates all muslim men to deal justly with orphans and then they can marry women of their choice two or three or four, but if they fear that they will not be able to deal justly with them, then in such circumstances a muslim man must prevent himself to perform second marriage, if he is not capable of fostering his wife and children.

It further referred to the decision in Itwari v. Asghari, 1959 SCC OnLine All 150 , wherein it was held that in a suit for restitution of conjugal rights by a Muslim husband against the first wife after he has been married to his second wife, if the Court after a review of the evidence feels that in taking a second wife, the husband has been guilty of such conduct as to make it inequitable for the Court to compel the first wife to live with him, it will refuse relief. Muslim law as enforced in India has considered polygamy as an institution to be tolerated but not encouraged and has not conferred upon the husband any fundamental right to compel the first wife to share his consortium with another woman in all circumstances.

The Court held that if the husband, after taking a second wife against the wishes of the first, also wants the assistance of the Civil Court to compel the first wife to live with him, the Court will respect the sanctity of the second marriage, but it will not compel the first wife, against her wishes, to live with the husband under the altered circumstances and share his consortium with another woman, if it concludes, on a review of the evidence, that it will be inequitable to compel her to do so; and even in the absence of satisfactory proof of the husband’s cruelty, the Court will not pass a decree for restitution in favour of the husband if, on the evidence, it feels that the circumstances are such that it will be unjust and inequitable to compel the wife to live with him

Advocate who appeared in this case : 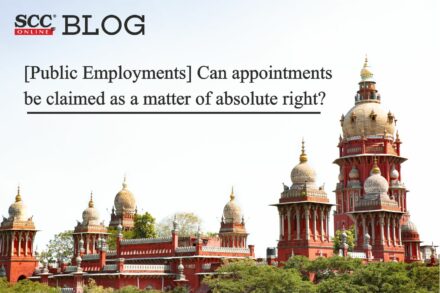 [Public Employments] Can appointments be claimed as a matter of absolute right? Madras HC unfolds