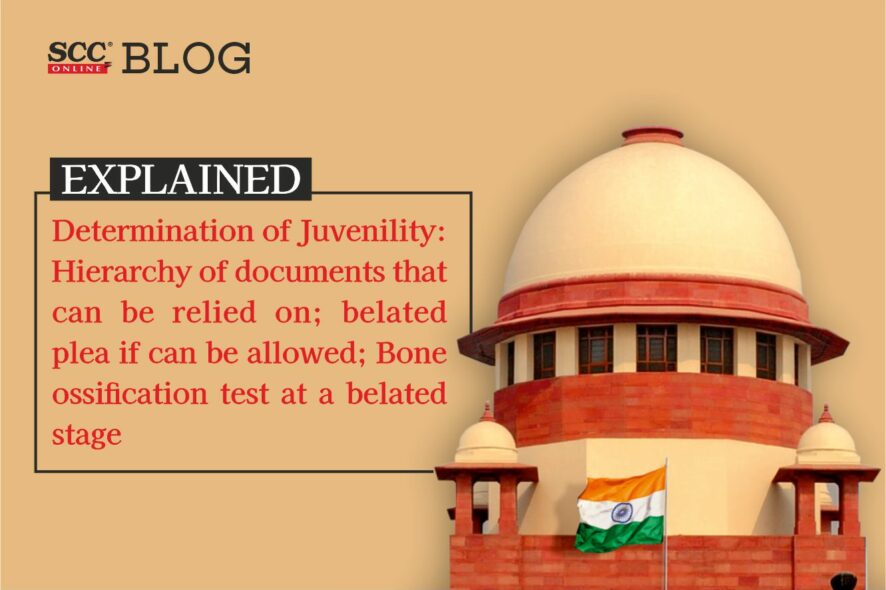 Supreme Court: The bench of Dinesh Maheshwari and JB Pardiwala*, JJ has observed that the plea of juvenility can be allowed to be raised at a considerably belated stage as the interest of a child is at stake as once a child is caught in the web of adult criminal justice system, it is difficult for the child to get out of it unscathed.

Keeping in mind the main object and purpose of the Juvenile Justice law, the Court said that the focus should be on the juvenile’s reformation and rehabilitation so that he also may have an opportunity to enjoy as other children.

In deciding whether an accused is juvenile or not, a hyper technical approach should not be adopted. While appreciating the evidence adduced on behalf of the accused in support of the plea that he is a juvenile, if two views are possible on the same evidence, the Court should lean in favour of holding the   accused to be juvenile in borderline cases. The inquiry contemplated is not a roving inquiry. The Court can accept as evidence something more than an affidavit i.e. documents, certificates etc. as evidence in proof of age.

Stressing on the importance of documentary evidence, the Court observed that a mere opinion by a person as to the accused looking one or two years older than the age claimed by him or the fact that the accused told his age to be more than what he alleges in the case while being arrested by the police officer would not hold much water. It is the documentary evidence placed on record that plays a major role in determining the age of a juvenile in conflict of law. And, it is only in the cases where the documents or certificates placed on record by the accused in support of his claim of juvenility are found to be fabricated or manipulated, that the Court, the Juvenile Justice Board or the Committee need to go for medical test for age determination.

Which document can be relied on?

As per the Clause (a) of Rule 12(3) of the Juvenile Justice (Care and Protection of Children) Rules, 2007 that contains a hierarchical ordering,

(ii) in the absence of a matriculation certificate that the date of birth certificate of the school first attended, can be relied upon.

(iii) in the absence of both the matriculation and the birth certificates of the first school attended that a birth certificate issued by the corporation, municipal authority or panchayat could be obtained.

Determination of plea of juvenility at a belated stage

Ideally, there should not be any dispute as to the age of a person if the birth is registered in accordance with law and date of birth is entered in the school records on the basis of genuine record of birth. However, in India, the factors like poverty, illiteracy, ignorance, indifference and inadequacy of the system often lead to there being no documentary proof of a person’s age. Therefore, in those cases where the plea of juvenility is raised at a belated stage, often certain medical tests are resorted to forage determination in absence of the documents enumerated above.

“The rule allowing plea of juvenility to be raised at a considerably belated stage has its rationale in the contemporary child rights jurisprudence which requires the stakeholders to act in the best interest of the child.”

The bone ossification test (ossification test) is a test that determines age based on the “degree of fusion of bone” by taking the x-ray of a few bones. In simple words, the ossification test or osteogenesis is the process of the bone formation based on the fusion of joints between the birth and age of twenty¬five years in an individual. Bone age is an indicator of the skeletal and biological maturity of an individual which assists in the determination of age. The most common method used for the calculation of the bone age is radiography of the hand and wrist until the age of 18 years beyond which the medial age of clavicle is used for bone age calculation till the age of 22 years as the hand and wrist bone radiographs cannot be computed beyond 18 years of age as the elongation of the bone is complete after adolescence. However, it must be noted that the ossification test varies slightly based on individual characteristics, therefore the ossification test though is relevant however it cannot be called solely conclusive.

When a person is around 18 years of age, the ossification test can be said to be relevant for determining the approximate age of a person in conflict with law. However, when the person is around 40-55 years of age, the structure of bones cannot be helpful in determining the age. The courts in India have   accepted the fact that after the age of thirty years the ossification test cannot be relied upon for age determination, however, the Court may, in rare cases, order it in the larger interest of justice.

Trial not likely to conclude soon; lack of evidence to prove corruption: Read why Punjab and Haryana High granted bail to Vijay Singla

Retrospective seniority from a date when employee was not even borne in service? A big no, holds Supreme Court