Bombay High Court: The Division Bench of Dipankar Datta, CJ. and M.S. Karnik, J. took cognizance of a PIL which was filed bringing on record the unclean and unhygienic state of affairs in the washrooms and toilets for the young girl students in Government aided schools.

The petitioner filed an additional affidavit dated 11-07-2022, placing on record the materials indicating the unclean and unhygienic state of affairs in the washrooms and toilets for the young girl students in Government aided schools. In the affidavit, the petitioner states to have conducted a small survey in rural areas in Maharashtra. It was alleged by the petitioner that no proper steps have been taken by the Government for proper and effective menstrual hygiene management for the school going girls.

Counsel for the petitioner submitted that the concept of monitoring of data related to Menstrual Hygiene Management practices in schools was in its nascence. He submitted that there was no existing database of school based data on such measures.

After perusing the additional affidavit-in-reply filed by the petitioner and the photographs annexed the Court lamented on the sorry state of affairs pertaining to the upkeep and hygiene of the toilets in some of the Government aided schools.

The issue as regards unclean and unhygienic state of affairs in the washrooms and toilets for the young girl students raised in this PIL petition affects the right of every girl child to live with dignity.

The Court observed that failure on the part of the authorities/concerned schools to provide for such basic facilities to the young girl students amount to denial of a basic human right to live with dignity apart from compromising on the health of these children. The Court however did not hesitate to express their satisfaction and appreciate the efforts on the part of the State Government, the Zilla Parishads, the Corporations, the Councils, the Panchayats under whose authority the schools were being run and encourage them to keep up the good work after AGP made an attempt to justify the State’s stance that the picture was not as grim as was being painted by the petitioner and in most of the schools the toilets and washrooms facilities were upto the mark.

Our endeavour is only to ensure that the constitutional goal of safeguarding the right to live with dignity for the girl child is not compromised in any manner.

The Court further opined that if what the petitioner submitted was true, they may have to consider directing the State to adopt a co-ordinated and comprehensive approach in resolving the concern expressed, whereupon we can move closer to the object of achieving the right to live with dignity for the girl children.

The Court found it appropriate to take the assistance of Secretaries of the District Legal Services Authority (“the DLSA”) within the territorial jurisdiction of the principal seat of this Court in obtaining reports about the conditions of washrooms and toilets in the Government aided schools. The DLSA was directed to carry out randomly, surprise inspection of at least 15 (fifteen) Government aided schools of which some of them should be from the rural/remote areas in the district and submit such reports on or before 22-08-2022. Further, the secretaries were directed to call upon concerned authorities of the local bodies/schools to take emergent steps in regard to the pathetic and unhygienic washroom conditions in the schools. The State in the meantime was asked to file a detailed response to the concerns expressed in the PIL petition, additional affidavit and also steps taken by the Government for proper and effective menstrual hygiene management for the school going girls. 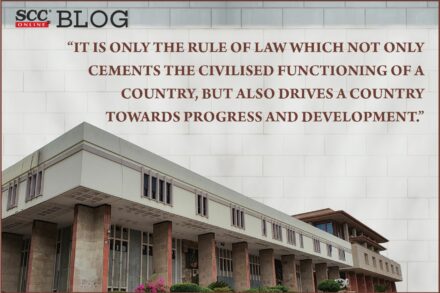 Whether absence of rule of law or utter disregard for the same propels a country towards inevitable ruin? Del HC throws light