The suit was filed in August 2005 against Neeraj Food Products (‘defendant’), the sole proprietary concern of Mr. Charan Das. The Plaintiff 1 – Cadbury India Ltd. and Plaintiff 2 – Cadbury Schweppes Overseas Limited claim ownership in the mark ‘CADBURY GEMS’/‘GEMS’ which is the subject matter of the present suit. The case of the Plaintiffs is that the Defendant launched a chocolate product under the mark ‘JAMES BOND’ with an identical colour scheme, layout, and arrangement as that of the Plaintiffs’ ‘CADBURY GEMS’/ ‘GEMS’ products. Thus, the present suit has been filed seeking permanent and mandatory injunction and damages for infringement of trademark and copyright, passing off, unfair competition and other reliefs.

Plaintiff 1 holds copyright registrations in its former name being Hindustan Cocoa Products Ltd. bearing registration numbers A-50680/90 and A-49975/89 for the artistic works in respect of a character known as ‘GEMS BOND’ which character has been used by the Plaintiffs for promotion of its ‘GEMS’ branded products. 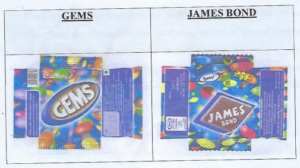 The Court opined that the present is a case of res ipsa loquitur and the comparative labels set out hereinabove show that the two products have startling similarities. The elaborate features that are similar are set out in order copy are skipped here for the sake of brevity.

The Supreme Court discussed the test of infringement and deceptive similarity of competing marks in Corn Products Refining Co. v. Shangrila Food Products Ltd., (1960) 1 SCR 968 and Parle Products (P) Ltd. v. J.P. & Co., Mysore, (1972) 1 SCC 618 wherein it was observed that, the overall structural and phonetic similarity and the similarity of the idea in the two marks is reasonably likely to cause a confusion between them and the Court has to see similarities and not the dissimilarities.

Where the product is eatable like a biscuit, the colour and the colour scheme of the packaging plays an important role in the consumer making an initial choice and in enabling a discerning consumer to locate the particular brand of a manufacturer.

Explaining the aspect of ‘initial interest’ in the same judgment, the Court relied on Baker Hughes Limited v. Hiroo Khushalani to observe

“In some case, however, it is also possible that such a purchaser after having been misled into an initial interest in a product manufactured by an imitator discovers his folly, but this initial interest being based on confusion and deception can give rise to a cause of action for the tort of passing off as the purchaser has been made to think that there is some connection or nexus between the products and business of two disparate companies.”

However, that may not be entirely true when it comes to products like biscuits. The packaging of a biscuit does become associated with the manufacturer or brand. The colour on the wrapper would certainly play an important part.

The Court noted that in the present case, the products in question are chocolates which may be consumed by young and old alike. The ‘GEMS’ product is also usually consumed by small children, both in urban and rural areas. The test in such a matter is not that of absolute confusion but even the likelihood of confusion is sufficient. Hence, the product’s get-up layout, and also, the colour combination of the packaging plays a significant role at the point of purchase. Moreover, chocolates are sold not merely in big retail stores or outlets, but also, in roadside shacks, paan shops, patri vendors, kirana stores and stalls outside schools, etc. Thus, there is an immense likelihood of confusion, particularly considering the class of consumers that the product is targeted at, that is, children.

Placing reliance on Uflex Limited v. Government of Tamil Nadu, (2022) 1 SCC 165, the Court directed damages to the tune of Rs.10 lakhs and thereby actual costs of Rs.15,86,928/- were awarded in favour of the Plaintiffs, in terms of the relief as sought, to be paid within three months.

Guj HC | ”Failed” student allowed to sit for next exam; Court allows application considering “Technical glitch” cannot be ruled out and must be taken into consideration 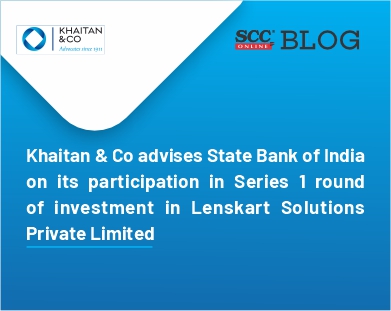